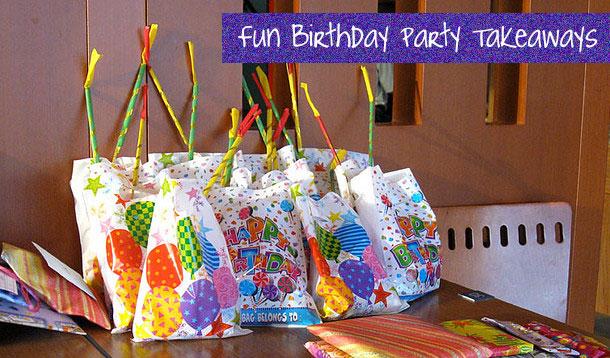 I hate loot bags.  I hate making them, I hate when my kids bring them home from a birthday party and I hate when the stuff is thrown out a few days later.

My kids don’t need any more cheap plastic games with pieces that get lost or fall apart the first time they play with them. We have enough super-duper bouncy balls, tattoos, cheap knock-off play dough and themed pencils, notepads and erasers to last a lifetime.

Loot bags filled with crap are sending a message to our kids that we live in a disposable society. I don't know about your kids but mine lose interest in their loot bags about three hours after the birthday party has ended - if that,  the only exception being the candy.  The rest either ends up in the bottom of their toy bin or the garbage bin.  Aren't our landfills overflowing enough?

We need to stop the loot bag insanity.

I'm not the only mother who feels this way either. If you too are sick and tired of dollar store loot bags, please join me in starting the "No More Loot Bags" revolution. This doesn't mean kids have to leave a birthday party empty handed. I'm not the Grinch Who Stole Loot Bags. I'm just asking that you give the kids something that won't be thrown in the garbage the day after it comes home.

It doesn't have to be expensive. I realize the reason most parents raid the dollar store for birthday party loot bags is because it's cheap. Who wants to spend hard earned money on 20 kids that aren't your own? But you can come up with some great alternatives that won't drain your bank account and the kids will love.

Make It Seasonal: Perfect For An Autumn Birthday

Buy small pumpkins and craft items – stickers, glue sticks, sparkles, googly eyes and markers – and have the kids decorate the pumpkins.  Not only is this a great activity for the party, the kids get to bring home the pumpkin and proudly display it for the world to see.

My younger son’s birthday falls in the month before Canada Day so one year I made all the kids a t-shirt with their names and the Canada flag.  This one cost a bit more – about $2.50 a shirt plus the cost of iron-on transfers but the results were fantastic. What was even more fantastic was seeing his neighbourhood friends wearing the shirts on Canada Day.

Helpful Hint:  Ensure that you “flip” the image before printing – otherwise you’ll only be able to read the names on the shirts when looking in a mirror.

This one isn’t for the faint of heart…but last year, we had a tie dye party.  Eight boys all under the age of six and vats of permanent dye.  I may or may not have taken a valium midway through the party but the results were worth it.

The Treasure Is In The Hunt

My son's birthday falls when there is warm weather so I typically have his party outdoors. This particular year we had a treasure hunt. The kids read clues to find the treasures hidden through out the neighbourhood.  Once one was found, they read the next clue and raced to find the next treasure. What were the treasures? Pebbles, soil, seeds and tiny plant pots. When everything was collected, they came back to our house, decorated the pots, planted a sunflower seed and took it home as their "loot".  Some of those sunflowers grew over six feet tall.

I get that we’re all busy.  Not everyone is going to have the time or inclination to make personalized t-shirts. This post isn't to make parents feel bad because they aren't burning cds with their kids favorite songs. We all have enough stress and activities in our lives – I don’t want to add more.  I'm just asking that you take a moment and think of something kids can use and won't break or be thrown out within 24 hours of the party. In the end, it will save your pocket book and help save our planet.  Not to mention the sanity of many many parents.

If You Liked These Loot Bag Alternatives You'll Also Like This Birthday Party Alternative.