They Promised Me I Would Glow 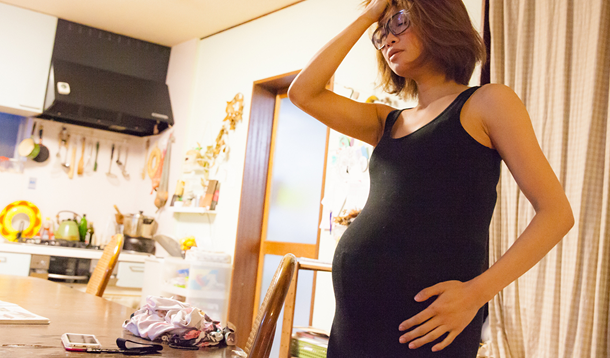 According to Hollywood and People Magazine, pregnancy was going to give me a glow. An inner light would shine through me filled with love and happiness as I grew a perfect tiny human being inside me.

My friends didn’t help. They are all gorgeous and made pregnancy look like a dream, looking as beautiful at four months as at nine months. I remember seeing my model friend, seven months pregnant at my wedding, thinking "Wow. She is stunning. Radiant!"

They definitely glowed. I assumed my pregnancy would also be glow-inducing.

The nausea came in like a wrecking ball. I was first hit on a beach in Belize where I was writing a story on paddling holidays. I turned to my companions and asked if late-onset seasickness after kayaking and being on land for five hours was a thing. The former Marine of the group shook his head at me. He may have muttered something about "liberal hippy writers" but I can’t be sure.

Once I learned I was pregnant, and despite the wooziness in Belize, I still told myself, "It can’t be THAT bad." The next three months were spent lying on my cold yet forgiving bathroom floor, never daring to be far away from my porcelain saviour. My husband would spend some evenings sitting on the edge of the tub with a beer and rubbing my back as I moaned and tried to give him puke covered hugs. Even the dog put in his time, keeping me company on the tile by creating a matching fetal position to mine.

I felt bloated constantly and was pretty sure that my expanding waistline was purely gas at this point (now I know that it was a combination of both baby and gas). I bought Tums for the first time in my life and didn't eat anything with flavour for months. For anyone who knows my eating habits, this is a very big and very sad deal.

The nausea did subside after the first trimester only to be replaced with severe food aversions and a tad more gas. The rosy glow on my cheeks wasn't pregnancy - it was indigestion.

I think naps should be a legal requirement of a workday and sleep can heal all. That being said, the pure exhaustion of just existing while pregnant blew my mind. The first trimester, I was on the same sleep cycle as a newborn, rarely averaging more than a couple hours awake. Sleep would hang on my eyelids and drip from my muscles if I tried to remain productive beyond those allotted few hours. Between that and my nausea, I felt like the epitome of uselessness. Not to mention always having creases on my face and sleep in my eyes that proved, yes, I had just been asleep during that meeting.

I heard that during pregnancy my hair was going to grow long and strong, as would my nails. I would glisten with the moisture and suppleness of a woman blessed with child.

My hair did grow faster, yes. The hair on my chin, eyebrows, bikini line and stomach appeared and reappeared frequently. Regardless of my fastidious grooming habits, it proved more difficult to keep up. I could hardly see my bikini line anymore, and waxing while pregnant was more painful than usual (and it normally involved a bottle of wine and a lot of self talk even BEFORE pregnancy).

The hair on my head was dry and frizzy (more than normal) and fell out often enough that I thought about collecting it all and creating another Natalie.

The theme throughout my new body seemed to be ‘dry.’ Dry, brittle nails, dry hair, and dry skin, all of which provide not a glow but more of a slightly flakey and always thirsty look.

My breasts looked fantastic. I went up a cup size, possibly two, and I loved it. I just wished my nipples stopped trying to compete on how fast THEY grew. I was proud of my newly acquired chest but discovered that they were for looking and definitely not touching. Sorry husband. They hadn't been that sore since puberty or this uncomfortable since they got sunburned on a beach in Thailand a decade ago.

This was nothing compared to the hip and back pain. A hormone called Relaxin pushed my hips apart to make room for baby, and you guessed it, that was anything but relaxing. (Yes- I made that joke). The baby was growing and pushing my bones, tissue and organs out of the way. I could feel every move.

I started working/writing standing up so I could keep my hips moving, and every so often, I folded over in a forward bend to relax my back and my neck. It made sense for my ever-changing body but looks very odd at Starbucks.

My conclusion? It was all a big fat lie.

There is no glow, there is no radiance, there is no overarching pregnancy aura that surrounds women for nine (long) and glorious months. Everyone has a totally different experience with pregnancy and copes accordingly. That’s the long and short of it.

But either way, a wonderful baby came into the world made of love, beauty and magic… and poop. Lots and lots of poop.

Previously published at The Adventures of Natty P & Co.

RELATED: Weird & Wild Pregnancy Symptoms Not Everyone Talks About

I am a Freelance & Travel Writer and Urban Mama covering the adventures that take me around the world as well as the ones that happen right here in my hometown of Toronto, Canada. Follow me at The Adventures of Natty P & Co. as I discover international experiences, explore new motherhood and get inspired to take your next amazing adventure.