Your Kids Need Less Than You Think, so save your money 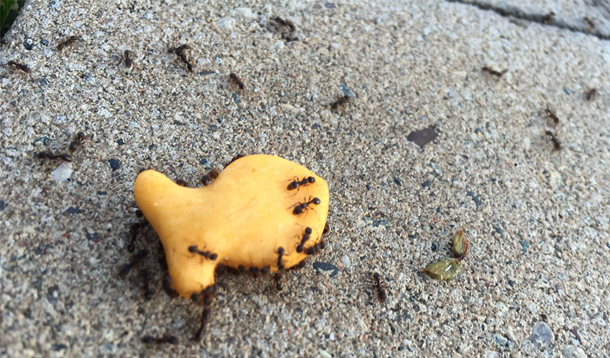 Ultimately, it was an army of ants at the zoo that started me on the road to saving thousands of dollars over the years, but it was a Slushie that sealed the deal.

Years ago, my husband and I took our young boys to the zoo. Our oldest was six and our youngest had just turned three. To say it was an epic disaster is to put it mildly. The day was hot with nary a cloud in the sky, and at about hour three, had the gates of Hell opened up before us, I would have happily gone in to enjoy the cool breeze.

The exotic animals we thought they’d be thrilled to see? Not so much, because most were sleeping. You know, extreme heat will do that to a lion. And a leopard. Also a hippo, gorilla, and the bloody elephants. They were all napping while we were dragging our feet from exhibit to exhibit. By mid-afternoon, everyone was done with a capital D.

Three out of the four of us cried that day.

Every night before they go to bed, I ask the boys their high, medium, and low points of the day. That night, both the boys couldn’t stop talking about the army of ants we passed in the parking lot on our way to the car. It hadn’t even registered on my radar, but the five minutes they spent watching hundreds of ants in a parking lot crack was worthy of not one, not two, not three, but many, many to conversations to come.

It was my first inkling that maybe I didn’t have to take these two young boys on grand outings that they would barely remember five years from now, but I was still relatively new to this parenting gig and I thought these experiences were needed.

And then came the Slushie. We took the kids to African Lion Safari for the day, drove two hours in a vehicle, slogged around for an entire day under the hot sun (again), and spent over $200. You know what their high point was that day?

If you guessed drinking a Slushie, you just won a prize!

For the same amount of money, my husband and I could have hired a babysitter, gone out for a nice dinner, stopped at a 7-11 on the way home, and achieved the same results.

There are other examples too:

Trip to the CN Tower = taking the subway.

Overnight stay at Niagara Falls = the free chocolates on the pillow.

And that’s when it all clicked. I didn’t need to take my young kids on extravagant outings and should, in fact, wait until they’re older so they could appreciate it, or at the very least, remember it.

These are kids who fight over string. So why was I spending hundreds of dollars to entertain them when they would enjoy just running through a sprinkler or playing at the park just as much?

I’m not saying don’t take your kids to these places. If you enjoy it, and have the money to do so, have a blast. What I am saying is your kids don’t need it as much as you think. What they really want is time with you.

And maybe an army of ants.

RELATED: The Sounds of Summer are a Gift