Dear Parents: It's Just All About Having Common Sense 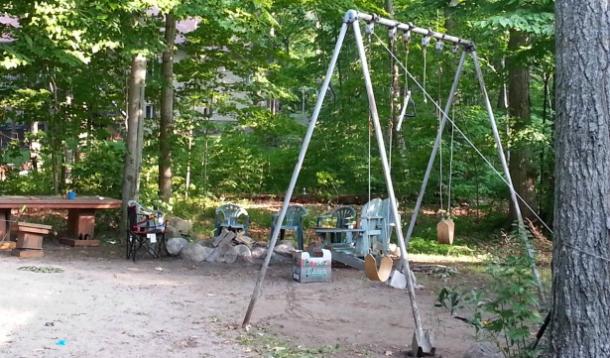 It seems there’s been a lot of chatter on YMC about Free-Range parenting.

Hailey wants to be a free-range parent but can’t let go.

Jen Warman is leaning towards the free-range-ish side.

Jackie wants to get rid of all the labels and for all of us simply to “parent.”


I’m like Jackie and personally hate labels but if I were to have one for my parenting skills, it wouldn’t be Helicopter Parent or Free-Range Parent. No, I am a Common Sense Parent.

When I read that out loud I feel like I should be wearing a cape and tights. Maybe with a big CSP on the front.

To me, Common Sense Parenting (and I’m totally taking credit for making up this new term) is just that–having a little common sense mixed in with knowing your kids abilities and even *gasp* helping to push them beyond those abilities every once in awhile.

The key phrase here is "knowing your child's abilities" whether it is his own individual abilities or a general age-related ability.

Individual Ability: I let my older son do his homework in his bedroom by himself because I know he is organized and will get it done. My younger son has to do his homework at the kitchen table because if I let him do it in his bedroom all that would be accomplished is ten pages of doodling scary monster faces and the word poop, and/or a major meltdown.

Recently we were at a cottage and there was this swing in the backyard. I dubbed it the Scary Swing. My boys were attracted to it right away because they seem to be drawn to:

(a) Anything that is dangerous
(b) Anything I may have played with or on as a child.

This swing was both. It was old, rickety, and not set far enough into the ground so each time they would swing in sync, the legs of the swing set would lift off the ground to the point of the entire thing “almost” falling over.

I knew they would have a blast on Scary Swing but I also remember having a similar swing as a child, only one time I did swing too high and the entire swing set toppled over on me. While there was no ER trip needed, I do recall a large box of band-aids and a Freezie being involved. Common sense told me that letting them swing on the swing as is was going to result in my vacation being ruined due to one or both of my kids having a broken arm. I didn't want to ban them from the swing because swings are fun so instead we rigged it up so it wouldn’t fall over and put a rule in place that only one could swing at a time. This worked because:

(a) My husband is a structural engineer, and
(b) My boys are old enough to listen when I set a rule in place, especially when said rule is accompanied by my scary face which is much scarier than any swing set.

If they had been 6 and 4, I never would have allowed it because I know the second my back was turned they would have jumped on that swing set at the same time resulting in me sitting in an ER instead of lazing on the beach.

Listen, I get it. You're probably thinking, "I would never have let my kids go on the Scary Swing." When my kids were younger there were a million things I never thought I would let them do. But now?

My youngest is allowed to ride his bike with no hands (a feat he learned and perfected last summer) but he always has to wear a helmet.

The same with scootering. I will drive him to the skateboard park so he can jump large ramps that make me cringe and say "Holy sh*t" on the inside while on the outside I’m all smiley and “Way to go, bud!” but he needs to have his helmet on.

My boys go on bike rides without me and I will send the two of them alone to the store three blocks away from our house with a list. For the record, kids old enough to run errands but young enough to still think it's fun are awesome. Ironically enough, the first time I sent the kids to the store by themselves the cashier questioned them as to where their mom was.

They’ve created a fort in the rafters of our garage and the only way to access it is by a ladder. They typically get down by jumping.

They’ve gone to the park without me where I’m sure they climbed up the slide instead of using the steps and broken other unwritten adult rules of the park.

My oldest son can build a kick-ass backyard fire by himself and my youngest just learned how to use the gas stove.

I have let my older son go to a friend's house where I didn't *really* know the parents (and if you're a relatively new parent you probably just gasped in horror but I'm telling you now, it's going to happen).

Both of my kids equally capable of cutting up their own apples using a sharp knife.

If you are a parent who has younger children and you're thinking to yourself “I’ll never let my kids do these things” here's what you need to know. Read this next line very carefully.

These things didn’t happen all at once.

Before I sent them off to the store by themselves, I made sure they knew things like how to cross the road safely and that they always need to stick together.

Before my son learned how to use a gas stove, I taught him how to use it and simple rules like always turning pot handles inward and not to wear loose clothing while cooking.

Years from now you ARE going to let your kid ride off on a bike for that first time while you sit on your porch and worry every single second they are gone. You will send them off on their own to let them do things you swore you would never let them do because all along the way they’ve taken the smaller steps needed to get there.

And I promise you this…it will get easier each and every time they do it.

Because you’ve had all these years to teach them.

And because you have common sense.

p.s. I still cut grapes in half for both my boys.

p.p.s. Nothing will convince me that sparklers are not scary dangerous. Those things reach 400 degrees, yo.