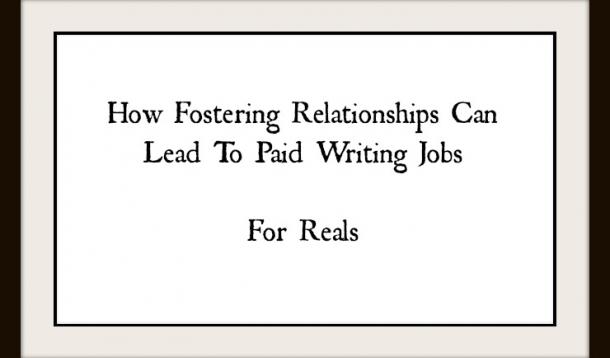 BlissDom Canada is just around the corner and the microsessions are filling up fast. It was no surprise to me that “From Blogs To Mags” led by Today’s Parent Senior Editor Tracy Chappell sold out immediately.

Every writer I know wants to be published in a magazine. Hell I love being published in magazines. Seeing my name and words in print makes me feel like a bad ass super-hero writer.

So go to the microsession and learn all you can because the insider tips you get from editors are da bomb and will absolutely help you get published in your favourite publication. I’m jealous that I didn’t get into the session so I’ll probably hound you afterwards to learn what she had to say.

I just don’t want you to discount how any relationship you foster may lead you to paid writing work. And at the end of the day that’s what you want, right? To be paid to do what you love.

Almost all of my writing jobs have come from relationships I have formed with people who have nothing to do with writing/editing/running a magazine. They were just cool people I got to know and then somewhere down the line, voila.

Case in point. Two or three years ago on Twitter @Acurasherway suggested to me that I follow a guy by the name of @KevinJaggar. Kevin gave up his cushy job as an investment banker to follow his dream of making it onto the Canada’s National Long Track Speed Skating team–even though he never tried the sport. So I followed Kevin because I think he’s either beyond awesome, slightly crazy, or both and who doesn’t want to watch that unfold? As time went on we started chatting—I would ask him for advice on speed skating and retweet the posts he wrote or leave comments. I loved his underdog story and was cheering him on the whole way because if I can support someone’s dream, Imma gonna be there.

Then one day I received an email from Kevin. “I need someone to write an article for a website. How much do you charge?”

After a few emails back and forth, I had a writing job…and then four more after that.

Don’t discount a relationship with someone because he/she doesn’t fit into the mold of what you are trying to achieve. That Kevin Jaggar story I just told you? I have about ten more I could write about right now including one about this triathlete who generously sent work my way this summer. I didn't even know she was a freelance writer when we started chatting, it was our pursuit of triathlons that bonded us on Twitter. But not only did she send me work, we now encourage each other to work out virtually because we both have new goals for 2014.

So go out there and meet new people, even if they have nothing to do with what you do, because you never know what will come of it.

I will end this by saying that while the paid writing gigs from these relationships have been great (bills paid = me smiling), the friendships I’ve created are priceless.

Category:
Life - Work
Tags:
how to find paid writing jobs
how to get hired as a writer
becoming published
Sharon DeVellis
Sep
20
2013

It's Not Always About The Destination, We Also Need To Enjoy The Trip 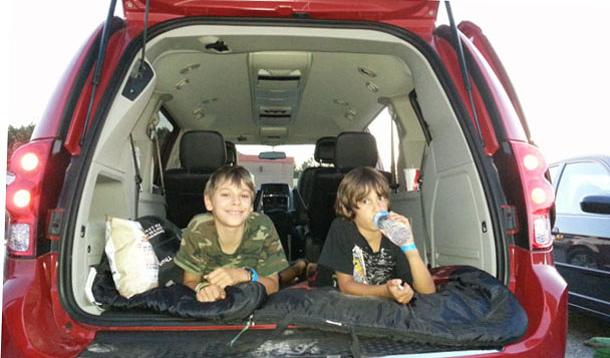 Like most kids, mine hate running errands. Case in point: This is a note my son wrote in his journal about running errands with me for our RV vacation.

And who can blame him? I'm an adult and I think errands suck, so why wouldn't a kid? When I was offered a Dodge Grand Caravan for a week so I could do all my back-to-school errands I jumped at the chance. Basically, I was all, “dual DVD player! Score!”

I’m going to go out on a limb and say that back-to-school is the most stressful time of year for moms, even more so than Christmas. At least Christmas has an end. Back-to-school starts with the pre-school shopping and organizing in August and continues on with forms, homework, the never-ending making of lunches, snacks, and rushed dinners until the end of June. Also, let us not forget this is the time of year when, for many of us, our kids start seasonal activities and sports. Even more stuff to do! GREAT!

*read that last line in a sarcastic tone*

If my boys were writing this review they will tell you that the Grand Caravan was “THE BEST VAN EVER!” and that they have bugged me at least once every three days for me to “Please, please, please buy one” ever since we returned it. I squeezed in as much as I could because (a) I liked driving it and (b) knew I needed to do everything in a limited amount of time so why not get it all done in a van where I could listen to satellite radio.

We shopped for school supplies: 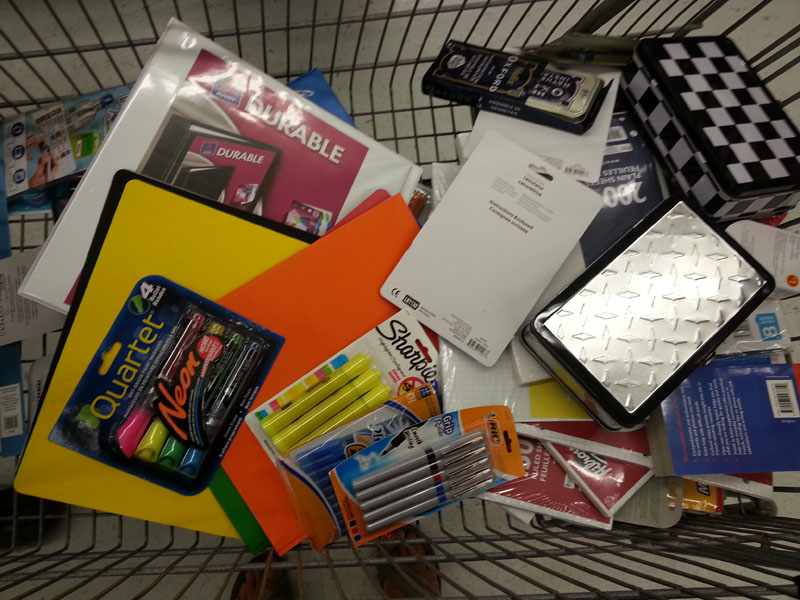 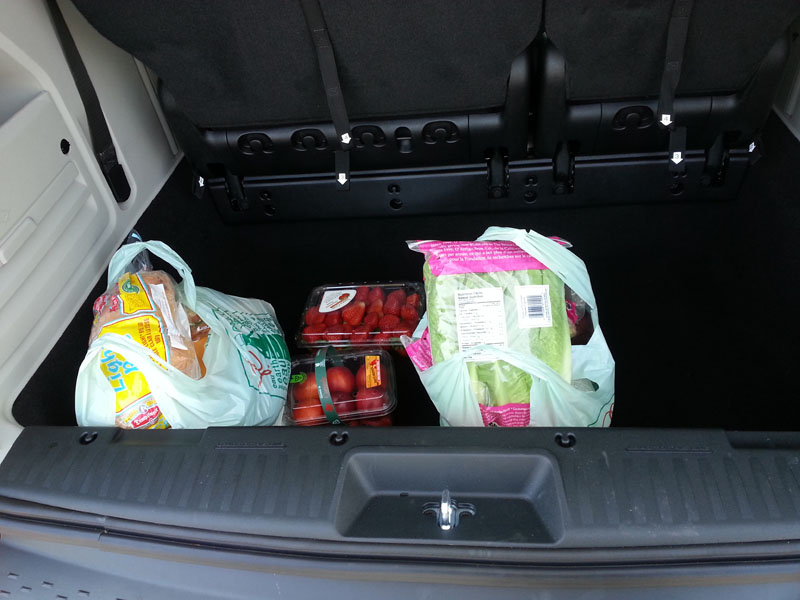 Not going to lie, life is a little bit sweeter when you are traipsing from store to store and your kids are in the back laughing hysterically at Mr. Bean on the DVD player and able to adjust their own air-conditioning while you're in the front listening to Howard Stern not having to worry they will hear an inappropriate word.

We did a ton of other things too which I'll get to in a second. But first:

Back-to-school/school year is stressful. We need to acknowledge this and not try to pretend it's not. People who know me often ask me how I’m so relaxed like I have some little secret I’m hiding. It’s not that I’m not busy. With sports starting up for my boys it means they will be shuttled around five days a week. Three times a week taking my older son to speed skating and twice taking my younger son to hockey. That is ten times a week right there alone. Then I have work and the rest of the stuff we all have: homework, forms, lunches, dinners, laundry, and just every day life. It's definitely busy but I do manage to stay relaxed most of the time and you can too.

You need to inter-mix the drudgery of chores, errands, and shuttling with fun. Not only for your kids, but for you.

Sure, we used our van to get our back-to-school errands done. But we also used it to pick up my son’s best friend for an impromptu sleepover, a quick trip to the park to let them burn off energy, and to go out for a special lunch at their favourite restaurant.

And after one day where we managed to get groceries, buy new shoes (indoor and outdoor for school—don’t get me started!), and every single school supply they needed *shakes fist at specific colour requests for duotangs!* we lowered the back row of seats, packed chairs, sleeping bags, and snacks and took the boys and a friend to the drive-in. 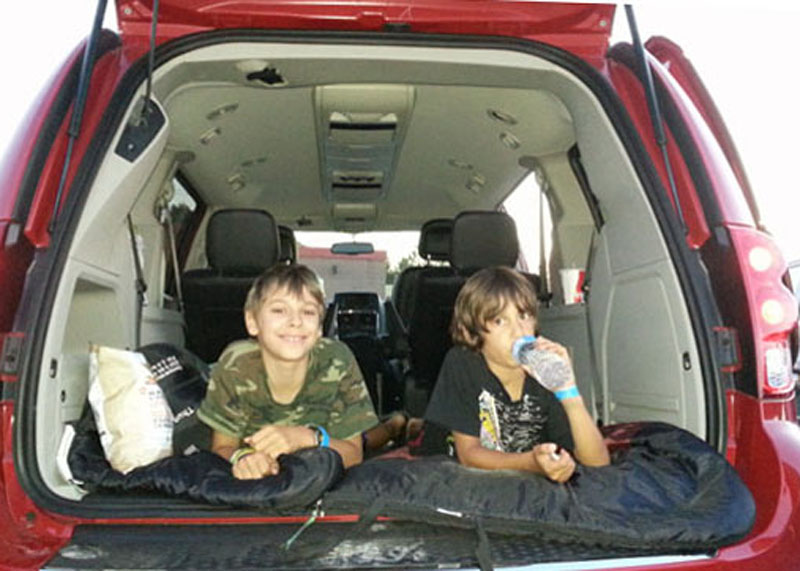 So the next time you’re caught up in the “have to get them to activities, need to pick up groceries, we’re running late” stress, that's the perfect time to stop for a second, take a deep breath and then maybe even surprise your kids with an ice cream. 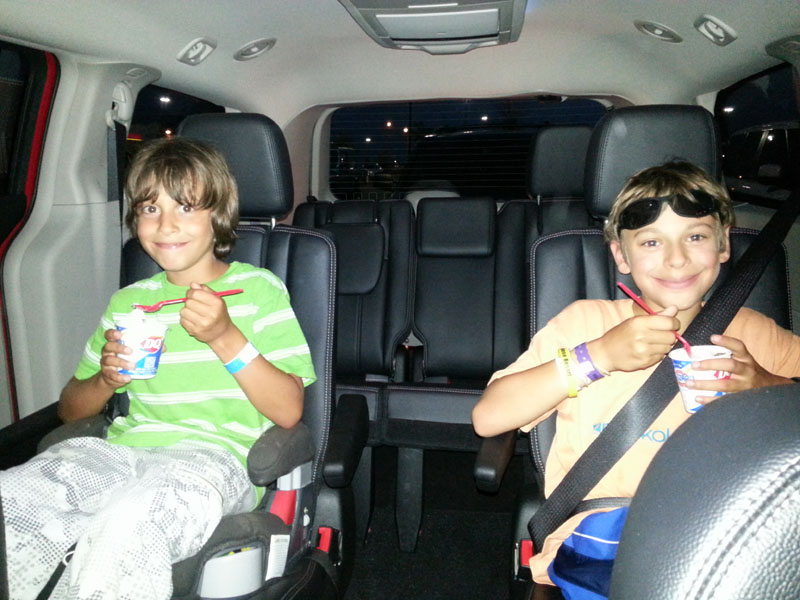 Because it’s not always about the destination, we also need to enjoy the trip.

Thanks Dodge Grand Caravan for allowing me to enjoy the trip with my kids.

Back to school chaos, car pool etiquette, what to love about minivans... 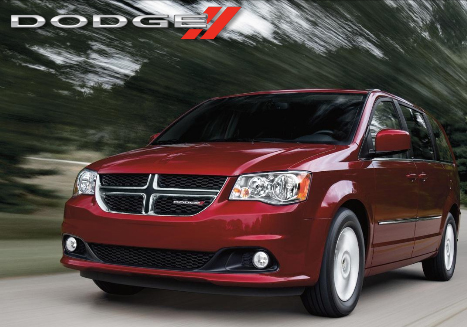 This is proudly sponsored by our friends at Dodge Canada.
dodge.ca/grandcaravan

The Kitchen Appliance You Thought You Didn’t Need 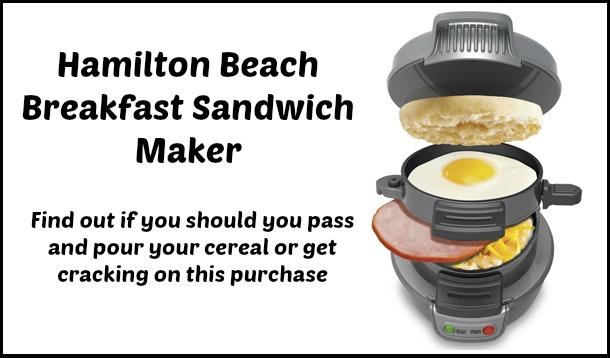 My older son had been eating toast with butter every morning for breakfast and it was stressing me out. Toast and butter is not a breakfast, it’s what they give you in prison.

On the weekends and on my husband’s day off we’d make him eggs but during the course of the week mornings are too hectic so I bit the bullet and bought a Hamilton Beach Breakfast Sandwich Maker because it seemed like something my son would be able to do himself and put an end to the toast with butter. So determined was I to get this breakfast sandwich maker that I went to four stores. Apparently this handy-dandy kitchen appliance is in high demand, and for good reason.

It’s as easy as it claims to be. I put in a whole wheat English muffin, top it with whatever we have on hand–I’ve used shredded cheese, goat cheese, avocado, tomato, prosciutto, and red onion to date—put the middle section down and crack the egg onto it, top with the other half of the whole wheat English muffin, put down the top lid and voila! In five minutes you have a breakfast sandwich.

Taking it out is super simple and the whole process is easy enough that my son can make his own.

And the clean up? A snap. Simply remove the centre portion, wash it and you’re done.

I bought mine on sale for $19.99 and we have used it every single day since, oftentimes more than once. It’s a definite buy in my book.

Prison breakfasts at Casa DeVellis are officially on house arrest.

p.s. This isn’t sponsored at all. I drove around to four stores to find it and paid for it with my own money.