When the email popped into my inbox, I knew I had to go.

It was an invitation to go jump at the newly opened Sky Zone Indoor Trampoline Park.  There's a bunch of them in the U.S. but this is the first one in Canada. Owner Caroline Irving has five kids so she knows all about the need to bounce off the walls to burn off energy.

Did I mention this isn't a typical trampoline place?  Sky Zone is literally lined with trampolines, including trampoline walls. You'd think it was just for kids but I'm telling you, as an adult....this was the most I've laughed in ages.

I took Lisa, a.k.a. Party Mummy, with me to jump start our day because she's pretty much willing to do anything.  The phone call went something like this....

Me: Do you want to come with me to this new place that just opened up?  It looks like it's literally lined with trampolines.
Her: Sure.

I love my friends.

We get there and the first thing we do is sign a waver. No biggie...this is becoming a frequent occurrence in my life. We get into a pair of jumping shoes and off we went to fly high in the sky.

We played dodge ball, jumped into foam pits, learned how to bounce of the walls and I took part in about three minutes of the SkyRobics (aerobics on trampoline) class.

I liked Sky Zone so much that I took my kids there this past Friday. Both boys left sweaty and spent and when I asked if it was a "do-again" activity, Son No. 2 declared "It's a do, do, do-again!".

I'm also going to get together a group of friends to try out a full SkyRobics class.  Apparently you can burn up to 1,000 calories in an hour. With the gasping I was doing after three minutes, this does not surprise me in the least.  I'm hoping I can convince Erica to come since she's struggling with this.

I will give one caveat:  If you happen to be a person who has given birth once or twice and *ahem* perhaps when you sneeze or laugh too hard certain things happen, it would be good if you dressed 'appropriately' and/or wore the appropriate nether regions gear for an activity with this much bouncing.

Would I recommend SkyZone as a fun activity for the whole family?

It'll have you bouncing to new heights. I give it a two thumbs up. What Will Your Children Find? 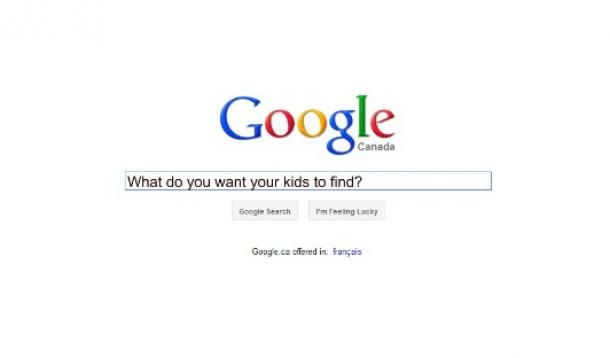 I’m google-able.  Chances are you are too.

My kids aren’t on the computer much. They don’t have Facebook accounts and for the most part, when they go online it’s to feed their Puffles on Club Penguin with me in the room as they earn coins and build igloos. The reality is though, there is going to come a time when they access the internet and I’m not there.

It’s a pretty safe assumption that they will eventually google me.

What you may not know is that every single comment left on YMC is emailed to me.  Every. Single. One. Welcome to the hell that is my inbox.

For the most part, we have really great comments – thoughtful, intelligent, respectful -- even when people are disagreeing.  Occasionally we receive comments that border on disrespectful, and some that have completely crossed the line to belligerent personal attacks. I’m quite protective of our bloggers, they’re family to me. If I don’t outright remove a comment that is mean, I do my best to give them a head’s up it’s there. Nobody wants to be greeted with that first thing in the morning.

Unfortunately there’s something about the anonymity of the internet that sometimes allows a person to say things they might not say if they were talking to a person face to face.  It’s even easier when you can hide under the name 'anonymous'.  Words are said, names are called, arguments started.

Catherine Connors spoke about opinion vs. truth at the BlissDom Canada conference.  How we need to really think about what we’re writing -- is it actual, fact checking truth or merely our opinion – what we think or feel to be true.

That really resonated with me.  Oftentimes we get so caught up in believing our opinion to be truth it clouds our judgment and makes it difficult to hear to what others have to say, especially those with a conflicting opinion. We hear the words but instead of really listening, we are busy formulating our rebuttal to convince the other person how we are, in fact, right and they are, in fact, wrong. As I get older (is this the wisdom shit I hear about?) I realize more and more how life is neither black nor white but many, many, MANY shades of grey.

I’ve read posts and comments where, in order to state an opinion, the writer has disparaged others who disagree with said opinion.

But this isn’t about anyone else. This is a case of self-realization, one of the 'those who live in glass houses shouldn’t throw stones' things. And quite frankly, not one of the great self-realizations where you're all 'Woot Woot, I'm awesome" but more of the 'this sucks ass but I guess I'll learn from it" ones because there have been times when I’ve written something, I have been so caught up in my own self-righteousness I failed to see what I was writing wasn’t truth at all.

It weighs heavily on my mind. In my day-to-day life I try to be a good role model for my kids so that I am not a do as I say and not as I do parent.  Although there is that sometimes too.

My online life should be the same. There isn't a different set of standards because I'm sitting behind a computer screen. It isn't okay to put down someone else in order to state my opinion or to not actively listen to what others have to say.

Because the fact is I’m google-able and there will come a day when my children google my name. What they find will be up to me.

I may not be able to make them proud with every word I write.

But I can damn well ensure they won’t be ashamed.