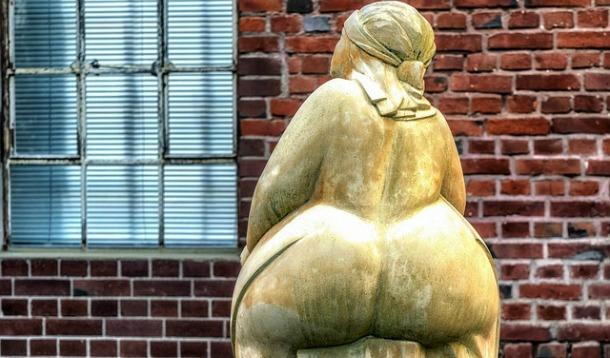 Just this morning we received a cheeky pitch from a company that makes and sells skin whitening cream for the intimate areas of your body that include, but are not limited to, (and this is taken directly from the website:)

The email continued on to say they were looking for a little exposure (well played, bleach company, well played) and the pitch even included potential working titles like:

Keeping up with the Jones: Why so many women are bleaching to look better.

I don't like to make 'ass'umptions about anyone. I’m a ‘you do it your way, I’ll do it my way” kind of gal. You want to wear a corset to the gym? More power to you. You look like a Victoria Secrets model three days after giving birth?  I applaud you because god only knows I was knee deep in a bin of chocolate eating my way through my feelings at that point.

Last year I had to see my doctor because I had a mole on the inside of my bum cheek. Let me tell you, THAT’s an appointment you never want to make. My mind went right to, OMG-what-if it’s-cancer-this-is-one-of-the-worst-places-to-have-a-mole-ever. As I was ass-end up on the table trying to get to the bottom of my mole issue my doctor jokingly asked how I found it. The explanation included (a) my husband and (b) me then trying to be a contortionist with a mirror to see what was going on.

While I was contorting it never once crossed my mind to check to see if my a**hole needed bleaching. Mind you, I was distracted with other issues at the time but I can, without a doubt, honestly say that in my entire life this is not something that has popped into my head once. Not once. So now I’m just going to straight out and say this in the off chance it actually needs to be said out loud.

Unless you are in an industry where your a**hole, or scrotum, or vagina, or penis, would be viewed by many people and it’s important for you to keep up appearances, then bleach away.  Or if you just feel the need to do it for yourself, then make that choice that works for you. But I will say that in my 47 years of living, experience has taught me that most men in the midst of having sex will not be focused on the colour of your a**hole. Just my thoughts on this particular subject.

So no, you don’t need to bleach you’re a**hole to keep up with the Joneses. In fact, I will go so far as to say, I’m pretty sure the Joneses don't care about your a**hole.

And if they do, it might be time to move to a new neighbourhood.

RELATED: Just What the Hell is a 'Real' Mom Body Anyway?

You Do It Your Way and I'll Do It Mine

Every year articles come out about how we're doing wrong by our kids by having them believe in Santa.

They won’t trust us.
We’re teaching our kids to lie.
It’s deceitful.

We even have articles on YMC about it.

Money expert, Rubina Ahmed-Haq, says we are setting our kids up for financial failure by telling stories about Santa, the Tooth Fairy, and the Easter Bunny.

I don’t have expert in any of my titles. If I had a title it would be Mediocre Mom of Two Who Mostly Gets it Right but Sometimes, Out of Left Field, She Screws Up Completely.

What I do have are two boys, ages 15 and 12, who believed in Santa for years. In fact I was able to keep both of them believing in the white-bearded-present-giving-guy when almost all of their classmates were past that stage. That is, until I completely screwed it up one Christmas in an epic way (see my unofficial title above).

Earlier this week I sat down with them and asked straight out, “Do you trust me less because I lied to you about Santa?”

Both boys didn’t even bother to look up when they answered no simultaneously.

So I delved a little deeper and asked if they would have preferred to know all along there was no Santa.

This time I caught their attention.

My younger son was the first to pipe up, “But we would have missed out on all those years of excitement and fun. I’ll always have those memories.” We then spent a few minutes sharing those memories and laughing – even the memory of me screwing it up for them.

And then I pulled out the big guns.

“Have I ever done something that has eroded your trust in me?”

And the truth is, yes I have. They both gave me examples of when and what I did.

My younger son’s example was one I remembered in particular. I had been messaging with a friend because I was frustrated at something he had done and he found the messages. He felt betrayed that I had been talking about it with her behind his back and when it happened I knew I screwed up big time.

It was one of those moments when parents just know. We all have them throughout the years where deep down inside you know you messed up and you need to do everything in your power to fix it. I did my best but clearly this is something he will never forget. Nor will I.

I never had that feeling when my kids found out about Santa, not even when I held one of my sons in my arms while he cried.

And that’s the point I’m getting to.

I absolutely believe there are kids out there who will have their trust eroded when they learn the truth about Santa but this doesn’t hold true for all kids. Like in all matters of parenting, you know your children best. We all raise our kids in our own different ways. And quite frankly, we’re all screwing them up in our own little ways.

I’m okay with you not sharing these stories with your kids just don’t tell me that I’m wrecking mine because I don’t follow your philosophy.

I have two well-adjusted boys and 11 years of magic that say differently.

This Mom Wants To Know: Is It Time To Scrap Santa?