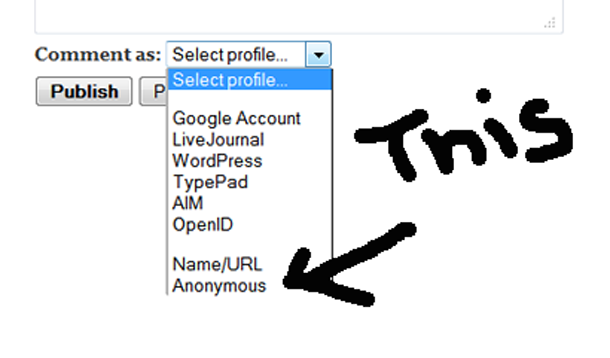 I read a lot of blogs. A LOT. I have my secret stash of bookmarked blogs set up in organized folders on my computer and go through them almost every morning whilst drinking my coffee.  Then there are the posts I find through Twitter and Facebook. All in all, it's about 25 to 30 posts per day.  I try to leave comments but only when I feel I can add to the conversation because comments are IMPORTANT. Not the "great post" or "LOL" comments but comments with meaning. While Twitter is great, it can be difficult to have a detailed conversation using 140 characters, but the conversations through blog posts? Those are magical. Comments also let you know people are not just reading but connecting with something you've written whether it's to agree, disagree or share their own story.

In this case I wanted to leave a comment but I can't because I don't have a Google, LiveJournal, WordPress, TypePad, AIM or OpenID account. Nor do I wish to get one because I have enough crap in my inbox and passwords to remember thankyouverymuch.

If you aren't getting many comments this may be your problem.  So how do you fix it? I'm not sure because I have a Wordpress blog that I didn't set up and am often accidentally deleting comments because my spam filter is overenthusiastic. But I do know blogspot does allow for a Name/URL box or an Anoymous option.

See? I can leave a comment on this blog because I have a name and a URL.

For awhile I had been quietly DMing people to let them know they need to add in this option but this just ended with DMs going back and forth asking 'how do I do this' and I don't know how—it's all I can do to keep my own blog from imploding. Also? I can't fix everyone. So this is your PSA. If you have a Blogspot blog, please drop everything you are doing right this very second and check your commenting options to make sure you have Name/URL and Anonymous set up so everyone will be able to comment on your blog that you've worked so hard to create, then pass this along to anyone else you know who hasn't done this.

Page views and number of visitors might be the king and queen of the social media world, but it's the comments connect.

Things To Do And Places To Visit In Ottawa 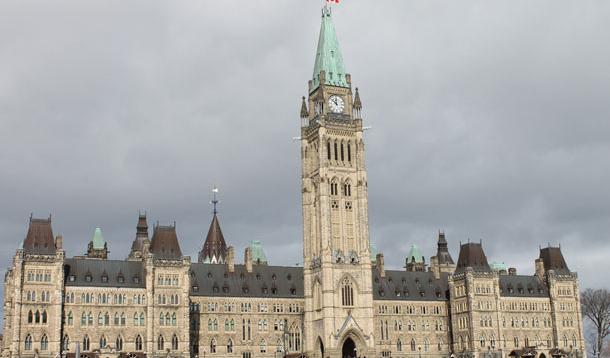 For the third year in a row, our family has gone to Winterlude in Ottawa. I was going to write a whole post about how much fun I had this past weekend and then I said to myself "Self, why would anyone want to hear about the amazing time you had? Maybe other people were home taking care of six puking kids and reading about the funtastical adventures of Winterlude would make them all stabby." So instead of writing about this particular weekend, I'm going to write about some of the places we've visited the past few years. That way if you ever go to Ottawa, you'll know where to visit.

We've stayed in three different hotels during our three stays in Ottawa but our hotel of choice going forward is the Ottawa Marriott. Located centrally, it was easy for us to get around with many attractions within walking distance. But the best feature, by far, was the Games Room. We could have driven to Ottawa and done nothing but hang out at the pool and play in the Games Room and the kids would have been happy. It was a great way to spend downtime together instead of just chilling in our room—Son No. 2 played hockey, soccer and basketball while Son No. 1 learned to play pool. When we asked the boys about the high points of their trip, both answered the hotel. And in terms of the little things that make me happy, they had more than enough plugs to accommodate my computer and a charging phone, PSP and Blackberry Playbook AND I didn't have to crawl around on the floor to locate said plugs—they're built into the wall by the desk.

Diefenbunker: Located about 20 minutes outside of Ottawa, the Diefenbunker is an underground bunker built in the late 1950s to protect the government from a nuclear attack. It was designed to house 535 people with enough supplies to survive for 30 days. From the rotary dial phones and ashtrays on office desks and in meeting rooms, stepping into Diefenbunker is like stepping back in time. Walking through the 100,000 square foot, four story building (all underground) you'll see the large cafeteria where everyone would eat, the Prime Minister's quarters, a hospital area (complete with operating room), communications rooms and living quarters. Our entire visit took approximately one hour.

Canadian War Museum: A five-minute drive from our hotel, the mandate for the Canadian War Museum is: Educate. Preserve. Remember.  But going through the museum is so much more than viewing artifacts and learning about the wars throughout our history. Seeing and understanding the sacrifices made for our country, many of the exhibits left me in tears. There are four galleries and our visit took approximately two hours.

Currency Museum: Son No. 1 collects money so we couldn't visit Ottawa and not visit the Currency Museum. It is home to the largest collection of Canadian bank notes, coins and tokens in the world.  What I really loved about the museum is that if you have younger kids who aren't interested in money they have stations set up throughout the museum where you can do crafts like make a toilet roll beaver, create your own currency and colour pictures. The whole family enjoyed this museum. Our visit took approximately an hour.

Royal Canadian Mint: Speaking of money, if you want to find out how your money is made, the Mint is a must-see. Take the guided tour as you learn more about the process, not only the actual making of the coins you carry around, but the security protocols involved so employees aren't walking out the door at night with gold coins in their pockets. And as it was the Royal Canadian Mint who designed the medals for the 2010 Olympic Games, you also get to see some up close and personal.  We spent approximately two hours visiting the mint.

Canada Science and Technology Museum: You won't hear "don't touch" at this museum. It's all hands-on with buttons to push and levers to pull and GIANT TRAINS. Huge, old trains you can climb on. We spent approximately three hours at this museum, 45 of those minutes were spent relaxing on bench while our kids explored the trains. You might want to take that into consideration when planning your outing because it's AWESOME.

Children's Museum: Located in the Canadian Museum of Civilization, the kids spent three hours travelling the world and stamping their passports. They crawled through a pyramid, put on a play, built a house, and loaded cargo on a ship. It was (and still is) one of the highlights of our 2011 trip to Ottawa.

Skating The Rideau Canal: The last two years the canal was closed for skating when we were in Ottawa as it was too warm but if you ever have the chance this is a must-do. The Skateway is 7.8 kilometres long, and begins near Canada’s Parliament Buildings and ends at Dows Lake. There are change facilities located along the skateway as well as food concessions (Beavertails!) and washroom facilities. If you have small children I highly recommend renting a sleigh. Little legs get tired. This is one of those things you have to do in your lifetime. It's an experience that will leave happy memories in your heart.

Snowflake Kingdom:  We've visited this magical kingdom two times and each time has been filled with laughter and fun. The ice slides are a slip-sliding good time and even the wait in line is fun as the kids try to dig holes into the ice walls.  There are Beavertails to be eaten, kites to be flown, obstacle courses to be run and even walls to be climbed. This year we saw a fantastic juggling/acrobatic act that our kids are still talking about. Getting to Snowflake Kingdom is easy as there are free shuttles on the weekends that run to the Winterlude sites. The bus stop was a ten-minute walk from the Ottawa Marriott and it took less than ten minutes to get to Snowflake Kingdom.

Rogers Crystal Garden at Confederation Park: There are no words to describe the ice sculptures at the Rogers Crystal Garden. We've gone both during the day and at night and while both are beautiful, I recommend going at night when the sculptures are lit up.  Pathways guide you through to each sculpture while music plays. There are food booths (Beavertails!—are you sensing a pattern here?) and outdoor fireplaces where you can sit for a spell to warm yourself if it's cold. This past year they even had a Young Sculptors At Work workshop where kids (ages 8-12) could learn basic techniques of ice carving with professional ice carvers.

All in all, Ottawa is a beautiful city that's easy to navigate with many family friendly attractions. As my kids say "Ottawa is a do-again."

Ottawa: Ya Ought To Go (I should be writing slogans).

Note: We were given one free night at the Ottawa Marriott and paid for the other two nights we stayed. I'm just going to throw this one out there because I want your opinion.

Last Friday I was on my way to Ottawa to celebrate Winterlude with my family (more on that to come).  It's a five hour drive so when I got tired of reading, I went on Twitter and started going through tweets favouriting anything I thought I might want to read later when I had access to my computer.

IT WEIRDED ME OUT.

When I told Erica the story, she thought it was good engagement.

So I'm throwing it out to you.

Do you consider an account publicly tweeting about a tweet you favourited in private good engagement or something that would make you uncomfortable?

p.s. While I appreciate everyone trying to explain this to me, I still don't get it.