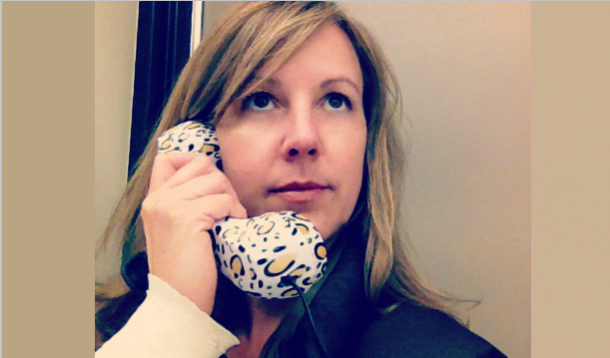 When I worked outside the home, with actual people face-to-face, there were plenty of opportunities for a joke and a giggle and a well executed prank. People can't be expected to be professional/serious for eight hours straight, can they?

Now that I work from home, the only human contact I have in an average day is the FedEx guy. It can get lonely. Granted, with social media channels like Twitter and Facebook, there are opportunities for social interaction throughout the day, but it can be a little superficial. I crave more personal interaction and since leaving the house in pajamas is frowned upon, I rely on the telephone. Knowing there's a chatty warm blooded person at my fingertips has been both a blessing and a curse. On the one hand, it's a lifeline. On the other, it's a cursed distraction. I'm working it out and attempting to make myself as "unavailable" as possible while I'm working. It doesn't always go so well.

A few fellow WAHM friends and I have this shtick where we just randomly hang up on each other mid sentence. It's beyond dumb but it makes me howl with laughter every time. Hello Cabin Fever.

One day, this innocent silliness went horribly wrong. I won't mention who was involved (to protect her dignity) but it was Sharon DeVellis. Her blog is here and you probably follow her on twitter here. Whoops, sorry Speed Skating Mom, I think I accidentally gave away your identity. Bygones and moving on...

I was chatting with friend X one afternoon and in the middle of an "important" story I hung up on her. When she called back to presumably tell me how funny I am, she hung up on ME the second I answered. What? How dare she! To teach her a lesson I devised a plan. I emailed several friends and instructed them to randomly phone Sharon throughout the day. When she answered, they were to abruptly hang up. Innocent fun, right?

Wrong. Turns out I have slackers for friends. None of them did it. Except one. One tech savvy pal really outdid herself. Too busy to actually make the call herself, she used an App to do her dirty work. Apparently there's a prank phone call website where you can choose the message, plug in the time and the phone number and it will prank call your victim for you, all automated-like.

Smart in theory, however, one should actually preview the message instead of selecting it soley by the funny thumbnail image. Why? Because your "funny" message could actually be a man's muffled voice saying, "Hi. I love how you're wearing your hair today...click."

This might lead your prank victim to think she's being stalked and cause her to freak-the-hell out. She *might* even seek help via Twitter and a panicked email to her spouse while you, the instigator, is blissfully unaware, not answering her phone because she's busy working for once.

When I found out what had happened via some stern DMs and emails sent my way, I felt horrible.

I called Friend x immediately. She didn't answer. I called again. After several rings she picked up. When I explained what I thought had happened, she forgave me immediately and laughed and congratulated me on such a hilarious prank. Okay, maybe not. She was pissed...

This was quite some time ago. She's totally over it. We can even laugh about it now. But still.... I sleep with one eye open. Prank payback is a bitch.

p.s. Hi everyone! This is Sharon! The one who got pranked. Lisa doesn't know I'm writing this because I have access to the entire backend of YMC and she doesn't. That means I can do anything I want to any of her posts at any time. I could maybe even go in each time she's written a post for the past year and purposely put in a typo or two.

She'd probably notice them if both her eyes were open.

Lisa Thornbury: Party Mummy Thanksgiving Dinner Without The Fuss or The Mess

Lisa Thornbury: Party Mummy Adding this Suffix to the End of Words is Ignorant