Brace Yourself... I'm Gonna Kiss You Right On Your Apocalips 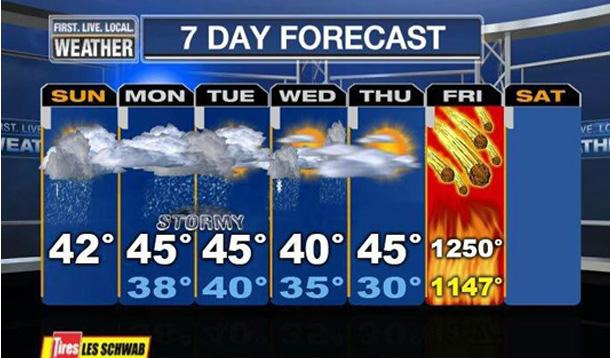 According to the Mayans, December 21, 2012 is the end of the world. They based this prediction on their study of the cycles of the sun. Of course we've heard this story before. Remember the mass hysteria around Y2K? Come January 1, 2000 we all breathed a sigh of relief and had a good chuckle.

Originally this post was going to be about hosting a funny Doomsday Party. I had all kinds of tips about inviting your favourite people to spend the last night on earth with you; to eat the most decadent foods, consume way too much wine and then kiss your friends square on their apocalips. When you greeted guests you could say tongue-in-cheek things like, "Arm-a-geddon you a drink or what?" You'd share stories about the good times while R.E.M.'s "It's the End of the World" played in a continuous loop in the background.

But not really. In light of recent events, it really feels like the end of the world as we know it. And frankly, I don't feel much like partying.

I did a little research about this whole December 21st apocalypse thing and now I'm sitting here wondering why, why must I Google shit like that? I'm already a worrier cursed with doomsday tendencies and an over-active imagination. Reading about solar flares and natural disasters and a potential third world war (oh hello Korea) and the disturbing accuracy of past oracles, is dangerous information for me to have.

And so I scrapped the post. Now is not the time to be making jokes about 'Doomsday Paté' and 'Solar Flare Flambés.'

Life is short. We never really know how much time we have. What I do know is that I'll be spending the night with friends. It also happens to be my husband's birthday. (Yes, there have been a lot of jokes about the anniversary of his birth coinciding with the apocalypse.)

Whatever you do, spend time with those who matter. Tell them you love them. Indulge, laugh, remember those we've lost and look ahead with optimism and kindness in your heart.

Life as we know it has been forever changed. But try not to let it scare you (because it really, really scares me). Instead, look for the good and hold onto that. And try to remember that for the most part, we can't control what happens; we can only control how we react and how we treat each other today.

This Game Is Addictive! 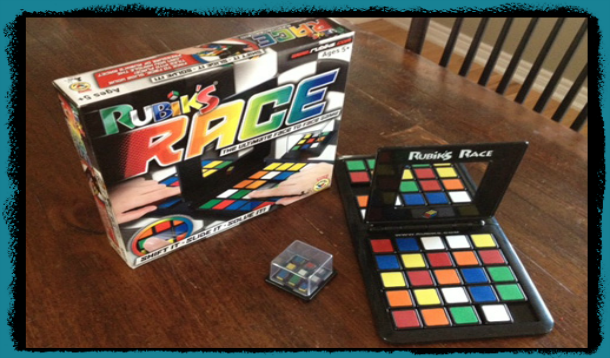 There's none of that "letting the kids win" to boost their confidence around here. Challenge mummy to a board game and you'd better bring it. I *may* bend the rules for my little one, but my nine-year-old is fair game.

We recently tested a game called Rubik's Race. It's a two player game requiring mad spacial sense and planning skills of which I have neither. I can barely reconfigure the furniture in my living room. However, this game is right up my alley.  I love the head to head action (it's set up similar to Battleship, which I rule at by the way). I also enjoy the thrill of the race–it really gets the adrenaline going which either means the game is awesome or I need to get out more? Either way, this game is a big winner at my house.

The first three times I played against my son, I'm proud to say I won each match. *takes a bow and knocks over said son in the process* It's a tough world out there folks and when it comes to gaming, my house is a 'no coddling zone'.

Thankfully I took the time to savour my victories, because after my son had a chance to figure it out, I haven't won a game since. Not once. Fortunately my child is a kinder, more humane human than I am and doesn't gloat. Much.

We attempted to make a video of us playing Rubik's Race but technical difficulties (I need a Mac!!) prevented us from sharing our heated battle. But, here's a video I pinched from Youtube that shows the game in action.

So if you're racing around looking for a fun gift for the family, check out Rubik's Race. It retails for about $19.95 online and in stores including at Mastermind, Chapters/Indigo and Toys 'R Us.

P.S. I had a severe Rubik's Cube addiction growing up which may have involved wearing a killer cool (at the time) pair of dangly Rubik's Cube earrings to school every day. Sigh. The 80s were a troubling time...

Disclosure: I was sent a Rubik's Race game to review. Opinions are my own.

Any Way You Slice It, This Breadmaker Is Amazing 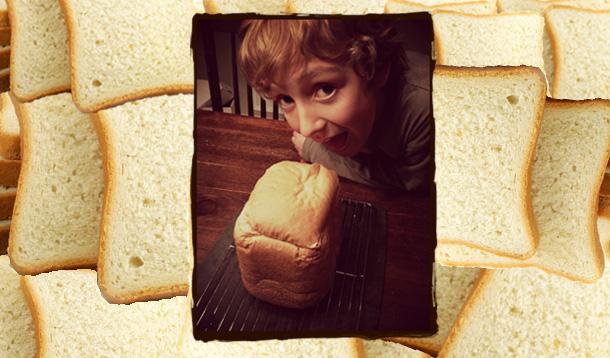 Did you loaf around too long and now you're scrambling to find an amazing gift? The Homebaker 2 lb Breadmaker is sure to get a rise out of anyone on your list. Note: It's tempting to go off on a bread pun tangent here, but I'll try to cool it with the fun bun puns...wouldn't want to annoy anybody and make them all crusty.

Hamilton Beach sent me this breadmaker to try and it was perfect timing since I really kneaded one. Okay, I'll stop for real.

My kids eat sandwiches every day (it's the one lunchbox food I know they'll eat) but I feel better about giving them homemade bread since I can control the ingredients and it's fresh...as in, "Kids, mummy set the timer on the breadmaker so when you wake up, what you'll be smelling is what is called BAKING–something rarely smelled in this house before."

The Homebaker is so easy to use. You literally toss the ingredients into the machine in the order in which they're listed in the recipe, choose the cycle (at the top of each recipe) and then wait–you'll have bread in a few hours. 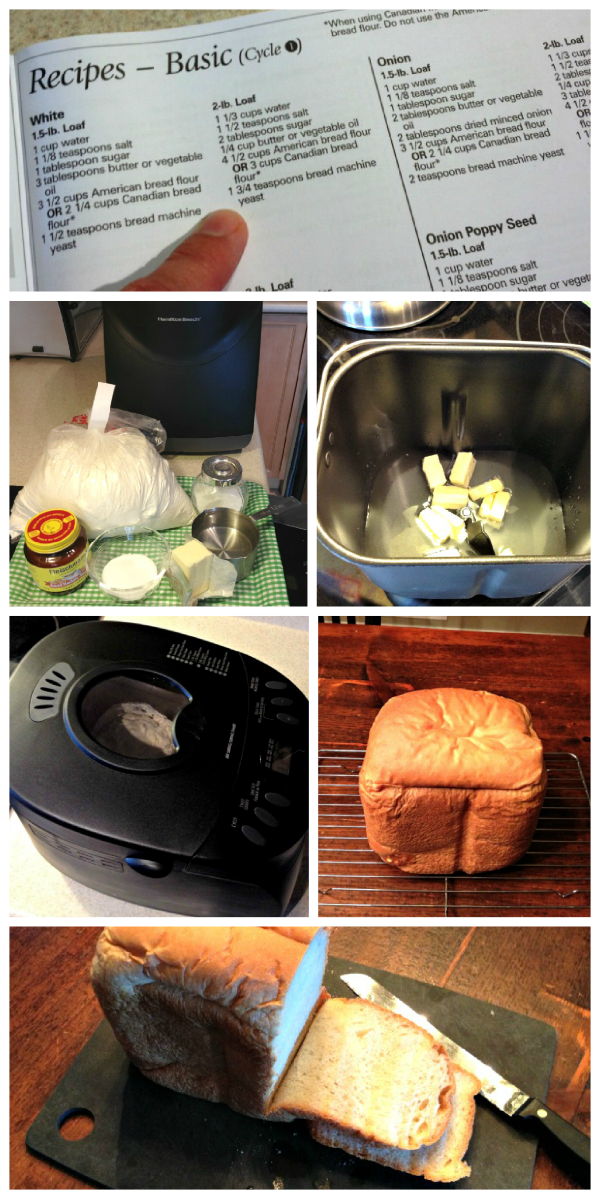 This machine makes all kinds of breads from gluten-free to French bread. It also makes jam. Yes, I said jam! I made some yesterday. The recipe called for strawberries, but apparently there's some weird strawberry shortage going on because I couldn't find any anywhere. So instead I used a combo of blackberries and raspberries. To make jam in the breadmaker you simply toss in the berries, add powdered fruit pectin and sugar, stir and select the Jam Cycle. When it's done, let it cool and transfer to a clean jam jar. 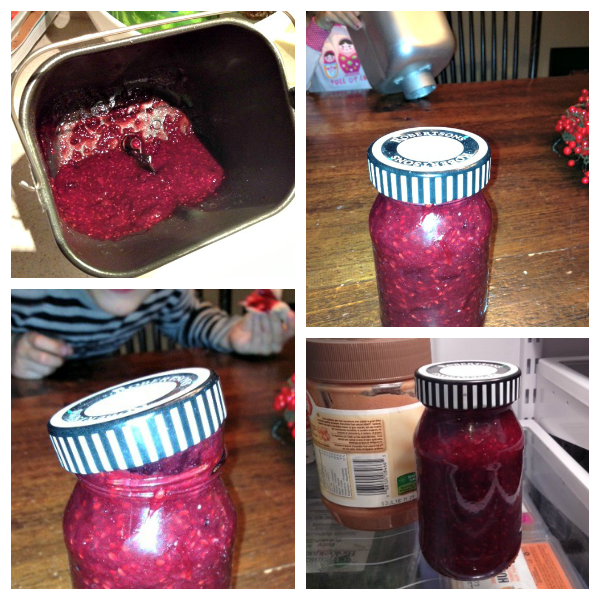 Those are my children in the background "testing" the product. We all agree, it's the best jam we've ever made. Granted, it's the only jam we've ever made, but even compared to the commercial jams we buy, it's delicious. We never have to buy jam again!! This excites me more than it probably should.

I keep my breadmaker out on my counter since I use it a few times a week. It's black and sleek so it looks great. But it's also light enough to easily move off the counter and store in the pantry. Reasonably priced at $79.00, it pays for itself in no time and that's a great way to save your dough. Sorry. I can't help it. To find out where to buy the Homebaker visit www.hamiltonbeach.ca.

Disclosure: This is not a sponsored post but I did receive a breadmaker to facilitate this review. All opinions are my own. Also, I'm feeling rather domestically smug and proud of myself.