Be not afraid. It’s going to be awesome. 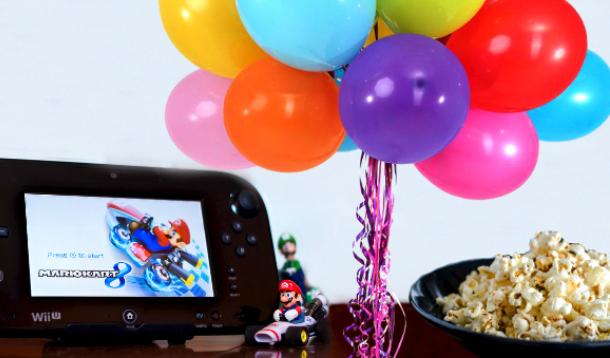 Fast forward...Friday Night Videos have been replaced by Friday Night Video Games! (I still sing into my brush by the way.)
Since our son is only allowed video games on the "Wii-kend," he looks forward to gaming with his friends—hence a long standing tradition of Friday Night Games Night at our house.
Fear not; it’s actually kind of awesome.
BECAUSE

You don’t have to drive anybody, anywhere—the party comes to you.

Your children are otherwise engaged, leaving you and your spouse alone. Gloriously uninterrupted. You can even have the big TV all to yourself for once.

As payment for hosting the party, you can charge the fee of a bowl of party snacks to your liking.

This is a great opportunity to get to know the kids your child is hanging out with.

You're freeing up other parents, thus ensuring they're forever in your debt should you need a favour.

Even numbers. Your Child + One or… Your Child + Three. No more than four. Unless it's a birthday party, keep it small. Also, switch up the kid combinations every once in awhile. As you get to know your child’s friends better, you’ll start to see which personalities and configurations work best.

-> Away. From. You. <-  Preferably on another floor. Or at the very least, behind a closed door. My son has claimed the basement as his party lair. Be sure to set a reasonable pick-up time or establish a strict lights-out time if guests are sleeping over. Otherwise, the next day you'll end up with cranky kids whose parents will give you the hairy eyeball for sleep-depriving their child.

Preview games ahead of time. Kids often bring their own favourites to share. Sorry, no Grand Theft Auto allowed here. Some of our favourite games include: 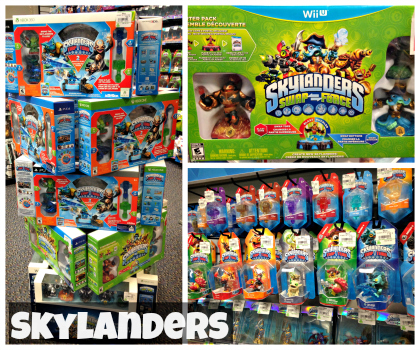 Skylanders is great for kids who like to collect (and really, what kid doesn't like to collect things? #kidsarehoarders). Skylanders is a video game series and each series has its own adventures and collectible characters. The figures sit on a magic portal (which is the device you attach to your gaming system) and are imported into the game world. I honestly have no clue beyond that, but apparently it's "like, tons of fun" and there are epic battles which result in kids cheering and shouting. Did I mention the "behind a closed door" thing? If you aren't sure about this one, each EB Games store has an interactive Slylanders setup so you can try it all out yourself! 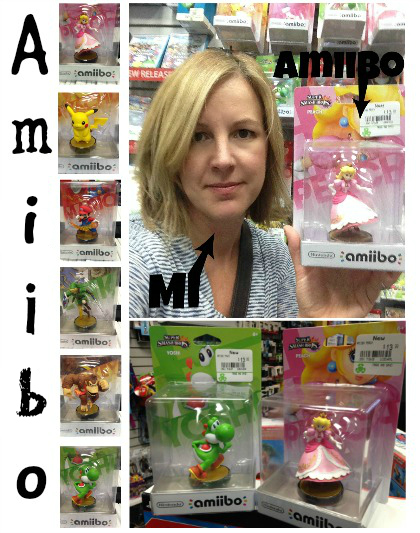 Amiibo is new to me. Or should I say, to mii? Sorry. I bought the Princess Peach Amiibo above for my daughter's Christmas stocking. Couldn't resist. (It's tough to tell who is the princess in the photo, so I labeled it.) Amiibos are only available for Nintendo 3Ds or Wii U. Similar to Skylanders and Disney Infinity, these collectable figurines are incorporated into the game environment (different games will work with Amiibo figures in different ways). Though in this case a portal is not required—you just tap the Amiibo to the game pad controller.
Different compatible games will use Amiibo in different ways. Super Smash Bros. for Wii U will be the first game to use Amiibo. Games like Mario Kart 8, Mario Party 10, Captain Toad: Treasure Tracker and Yoshi's Woolly World are also planned to support Amiibo. In Super Smash Bros. players can battle alongside or against their Amiibo characters. I picked up a Mario Amiibo for my son. I'm looking forward to watching Princess Peach and Mario battle to the death. ;) 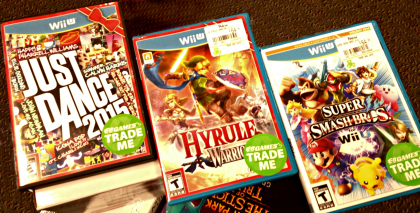 Any of the Mario series games are fantastic. And dancing games like Just Dance 2015 are MY favourite. My daughter's too—super fun and great exercise. Seriously, active + competitive = sweaty! Speaking of which, I keep trying to put our Wii Fit into the "sell back to EB Games" pile, but my husband and son keep pulling it back out again. I suspect they're trying to tell me something. If you do sell anything back to EB Games, you'll get a credit (dependent on the value of your trade-in) towards purchasing a new game.
This latest version of Just Dance is cool (or hot, depending on how much effort you're putting in) because you can get in a workout by using Sweat mode to track the calories you’re burning while dancing, or choose to own the spotlight in On Stage mode, where one player can dance and lead one or two backup dancers! For even more fun, Karaoke mode displays song lyrics on the screen so that you can sing along to every song. Friday Night Videos, I miss you, but this is even better. I'm starring in my own videos now baby!

My son and his friends take regular breaks from video games by hitting the park for an hour or playing a board game. EB Games carries a fun selection of themed board games. Walking Dead Monopoly?! I know EXACTLY who I need to buy that for. 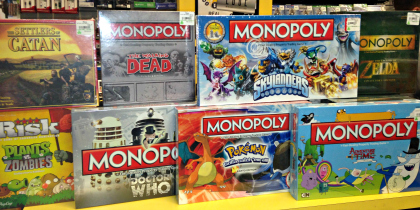 Open your home to your child's friends. You have a small window of opportunity where they actually want to stay home.

Video games, when properly screened, and balanced with breaks for some quality face-to-face interaction, are an awesome choice for home party entertainment. We've tried movie nights, but most tweens find it hard to sit through a two hour movie when there's active fun to be had, but video games seem to keep them happily engaged.

Visit your local EB Games to check out the latest in video game consoles and accessories, video games, board games, etc. The staff know their stuff, they're really helpful, and the prices are great. We have a store right by us and my son and his friends spend hours there, drooling. I like to joke that the store smells of hormones and nerd, but apparently that's not funny. I guess that's why I'm never invited into the basement to play Just Dance with the partiers. Or perhaps...it's my alarming dancing/singing?

Keep Your Pets Safe During The Holidays

Anyone Up For Some Heavy Petting Under The Mistletoe?

Keep Your Pets Safe During The Holidays 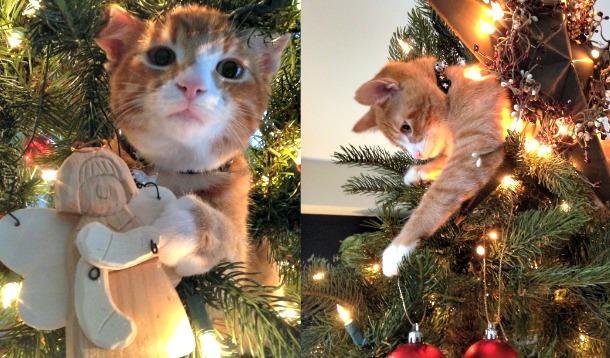 When I was a kid, my friend's cat had obviously eaten Christmas tree tinsel (he had a long sparkly strand hanging out of his butt). When I went to pull it out my friend's older brother shouted, "Stop! You'll pull out his intestines!!" Later that winter when my mom made a money cake for my birthday, all I could think of when I was tugging on a ribbon in search of a coin, was yanking out a pile of cake covered cat intestines. Scarred...for life.

You Won't Believe What Was Inside This Dog's Stomach!
The holidays bring up all kinds of memories. Some horrifying ones, like cat disembowelment, but mostly sweet, like the special times spent with our families - pets included.
Nobody wants to create holidays memories based on separating Fluffy from his innards, so here are some tips to keep your furry family members safe over the holidays.

Candy can cause gastrointestinal problems like vomiting and diarrhea, while chocolate and xylitol (found in sugar-free candy and gum) are potentially deadly.

Rich holiday foods can cause stomach upset or even pancreatitis. A little bit of lean meat is fine, but offer sparingly (and not directly from the table. Ya, I'm looking at you Grandpa!).

Onions and garlic can be toxic to pets. Plus, my dog's breath is already bad enough...

Bones from your holiday meal can cause obstructions and perforate the intestines. Oh god, intestines again...

Keep your kitchen trash secure and take it out at the end of the day to prevent "Sniffy" from ingesting something harmful. Or gross.

Poinsettia plants are mildly poisonous—leaves and sap can cause drooling and intestinal upset. (P.S. So can drinking four glasses of wine on an empty stomach. Or so I've heard.) Holly, mistletoe, amaryllis, and lilies are all potentially toxic too, so it's best to use faux versions of these plants if you have pets.

Would You Cook For Your Dog?

Be mindful of your pet's access to ornaments, decorative lights, wires and of course...tinsel. "Dangly and sparkly" = irresistible to curious cats and can create a tangling, suffocating, choking, or electrical shock hazard.
Best of the season everyone!
May your holidays with Kitty and Fido be filled with peppermint "bark" and happy "felines." 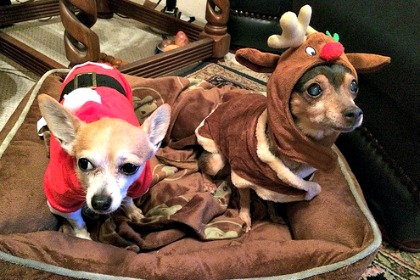 Plus A Kid Friendly Version 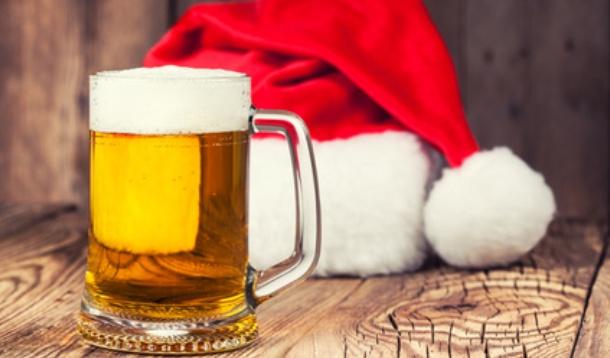 Since Ross Hammond (@RossGraphitas) tweeted the simple instructions to a silly Santa Hat Drinking Game, his post has been retweeted and favourited over 20,000 times and counting. The Huffington Post UK even ran a story on it.

People like to drink over the holidays. Probably a result of stress, family in close quarters, the bitter cold, shopping. Whoever sang, "It's the most wonderful time of the year!" was obviously drunk.

3 Cocktails that Bring Sparkle to Your Holiday Party

Anyone up for a round of this quenching game? The rules are simple... 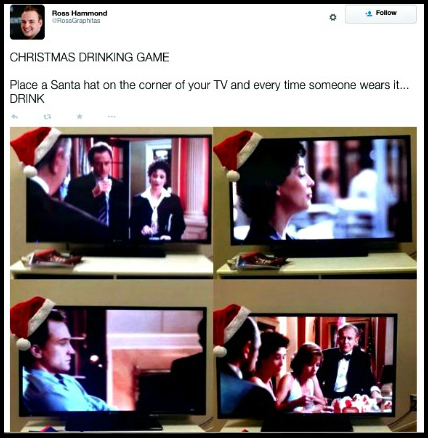 The holidays aren't all about getting lit however. Though I guess it depends on how much you like your family, and your tolerance for wrapping paper inflicted paper cuts, and how much your enjoy having your arm shoved up a turkey's butt, and....etc.

The Santa Hat Game is easily transformed into a wholesome family friendly game. I know my kids would get a kick out of it!

1. Hang a hat on the left and right corners of the T.V.

2. Make a list of tasks, e.g. foot rub, fill snack bowl, back tickle, top up drink, fluff pillow, sing the first chorus of Frosty the Snowman, etc. (If it was up to me I'd add; fold laundry, unload dishwasher, clean litter box. Who says housework can't be festive fun?)

* If you're more Satan Claus than Santa Claus, you could restrict the tasks to the kids only. As in, THEY have to do the tasks, while you sit comfortably drinking a glass Gav's Martell's Festive 1-Step Bottom's Up Sangria.

**On a serious note...if you are going to drink, be responsible. Drinking is not a game (Wait? When did I become "that woman?" Sigh.) Parenting Tip: Quarters and "I Never" are not appropriate choices for Family Games Night: Why Drinking Stories Aren't So Funny.