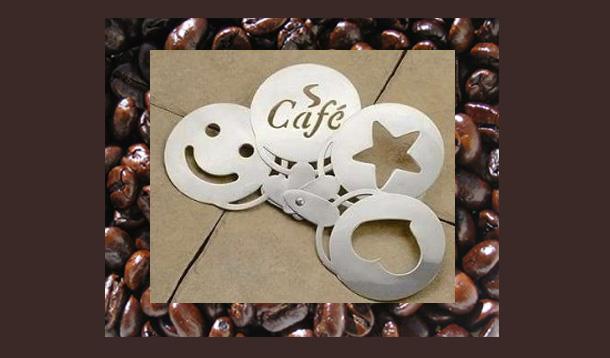 Coffee stencils will tranform a cappuccino from ordinary to extraordinary in less than two minutes, thus bringing you one step closer to becoming a member of the Hostess Hall Of Fame.

cappuccino or latte - You can use a cappuccino maker if you have one, but a powder mixed with hot water works too or just top your regualr coffee with steamed milk, frothed.

coffee stencils – Sold at most upscale kitchen stores. There are full “holiday sets” available this time of year but my hinged set of four (star, cafe, happy face, heart) can be used throughout the year. I use the star during the holidays. If possible, buy the kind with a lip to prevent your powder from spilling everywhere.  My set doesn’t have a lip, so I put the mug on a plate before sprinkling.

shaker – Makes this easier, but it’s not necessary if you don’t have one.  Just sprinkle slowly with a spoon.

Apparently the stencils can also be used to make designs on cakes and cupcakes (this is hearsay by the way since I don’t bake, I “bakery.”)

A set of stencils and a package of cappuccino mix or a milk frother would make an excellent hostess gift.

*HHF = Hostess Hall of Fame.  What?  There IS one. I'm sure of it.  I think it's in Upstate New York somewhere.  Martha Stewart is involved somehow... 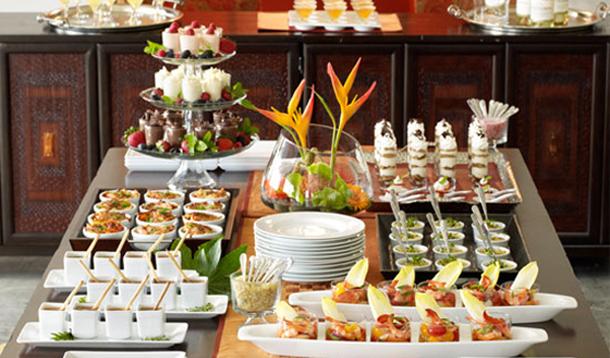 ‘Tis the season to invite friends for some holiday cheer and a few nibbles and giggles (how many giggles may be directly linked to the quantity of holiday cheer).

I’m the first to ask guests to bring something to a party, however even I, “Queen of the Pot Luck,” hesitate to ask during the holidays. Not sure why. It just seems un-festive or something. While leafing through the Pier One catalogue last weekend, I discovered the “Tasting Party Collection.” What a great way to put a groovy spin on the traditional pot luck. And, the groovy factor seems to diminish the awkwardness of asking for contributions. Yes, this is how my mind works. So if you’re on a budget, but still want to host a “tasteful”, yet unique holiday party, organize a Tasting Party.

Easy Entertaining: 8 Potluck Parties You and Your Friends Will Love

Here’s how:
Assign each guest a category – drink, savoury appetizer or sweet dessert. Guests can use tasting size serving dishes and spoons or mini martini glasses to present their offering. You don’t have to BUY specific “tasting dishes.” Use ramekins, a muffin tray, shot glasses, small juice glasses, etc. Be creative.  Also, dishes don't need to match. Yes, the tasting spoons etc. are cute, but they're not essential.

It’s perfectly ok for guests to bring something store bought. Hello?  They’re bringing something right? Hallelujah to that.

Offer your friends a “welcome drink” to sip while waiting for everyone to arrive.

3 Cocktails To Add Sparkle To Your Holiday Party

Guests place their contributions on the table as they come in. Once everybody has arrived, have each person say a few words about their food or drink.

Instruct guests to have one of each item throughout the night. They should put back empty spoons, dishes or glasses where they got them from. This way serving items won’t get mixed up or lost and the owner of each grouping of dishes can easily pack them away to take home to wash at the end of the night.

What kinds of food make perfect “tasting portions?” Any recipe that can be easily divided into small servings will work.  The Pier One website has some good recipe suggestions with photos.

I'll Have The Soup With A Side Of Awkward please 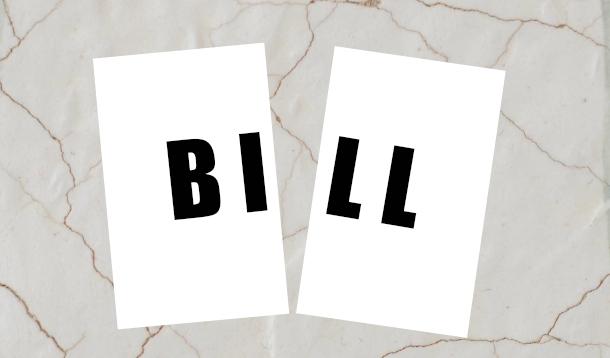 This is a true story (names have been changed to protect the innocent).

My husband and I went out for dinner with two other couples.  We dressed up, left the kids with the grandparents and went to a lovely restaurant. One of the wives asked me ahead of time, since they were on a strict budget, would it be “gauche” to request separate cheques? I said it was more than fine and I would make sure our server was aware. While waiting to be seated, the six of us enjoyed a cocktail in the lounge. This bill was transferred to our table...on one bill.  The server began taking appetizer orders while I was away from the table and put them on the running tab. When I realized this, I asked if we could separate the cheques by couple. He looked at me as though I’d asked him to donate a kidney. I recoiled and said, “Never mind. We’ll figure it out.”

When the bill arrived at the end of the meal, we did NOT figure it out. Well, we did eventually, but the process wasn’t pretty. Without going into all the dirty details, some people ate less than others and didn’t drink alcohol, so when somebody suggested we simply split the bill evenly, it didn’t go over well. There was glaring. Glaring and steaming. Glaring and steaming do-not-a-festive-outing-make. I squirmed in my chair and tried to shrink away from the glaring and steaming filled silence.  To make light of the situation, I inquired jovially, “Hey, anyone see the ‘Friends’ episode where they went out for dinner but Rachel, Phoebe and Joey couldn’t afford the expensive restaurant so they got into a fight with Monica and the other guys? Ya, it was really awkward -pause- kind of like this...”  My husband still makes fun of me for this lame attempt at levity. Sigh. It’s hard being the queen of confrontation avoidance.

Anyway, it all worked out in the end. The bill was paid, friendships were restored, blah, blah, blah. But the fact remains, how to handle the bill between friends can be trouble, especially if you’re on a budget. Do you offer to treat? Do you go Dutch? What do YOU do?

Here’s my two cents –
Offer to treat if you can, but choose a restaurant in your price range.

Split the bill ONLY in the appropriate circumstance. For instance, lunch with the girls. Chances are you, Sally and Susan are going to rack up about the same bill and the difference of a few dollars is no biggie. But what about a night out with a large group? What happens if you order a small salad and a soda water, while Steve has a 24 oz. steak, two bottles of expensive Merlot and dessert? Will you be ok with that? If so, go for it. But if not, you should make your preference known in advance.

In a perfect world, we would all be dripping with money and treating our friends to breakfast, lunch and dinner daily. However, the world is not perfect and my husband drives a Saturn. Nobody wants to appear cheap, but I’m just going to say it.... SEPARATE CHEQUES SAVE FRIENDSHIPS.

Splitting the bill down the middle can cause tension and alternatively, passing around the cheque at the end of the evening, trying to figure out who had what and doing the math is an unpleasant way to end your meal. I’d rather have a wafer thin mint. Mind you, if your math skills are weak at best (ahem, I break into a cold sweat when asked to add numbers whose sum exceeds two digits), there is technology to help. If you have a Smartphone, there are all sorts of "adding up the bill apps" to download. Of course, you could also go old school and use a calculator, but an app to add up your appies just seems like more fun.

One more point. If I know we’ll be splitting the bill evenly, I order differently. I choose less expensive meals and I’m more inclined to skip dessert or appetizers. Granted, this is beneficial to my waistline, but when I go out I want to be able to order whatever I want without feeling self-conscious. If I’m paying my own way, I can choose a modest meal that fits my budget or decide to splurge on an expensive chardonnay.

If your server claims they don’t do separate cheques, he’s probably fibbing. If I had let him know sooner about the separate cheques that fateful night, there would have been a lot less glaring and steaming and perhaps a little after hours dancing instead.

How do YOU handle the cheque? If your answer is “I always pick up the tab and LOVE to take my friends to expensive restaurants,” I’m available this weekend. Mexican and Indian are my favourites.

Category:
Life - Money
Tags:
splitting the cheque
splitting the bill
awkward night out
dinner with friends
what do you do?
going dutch
lisa thornbury