Don't Be A Halloween Buzz-Kill

...Or Why You Should Give Teenagers Candy 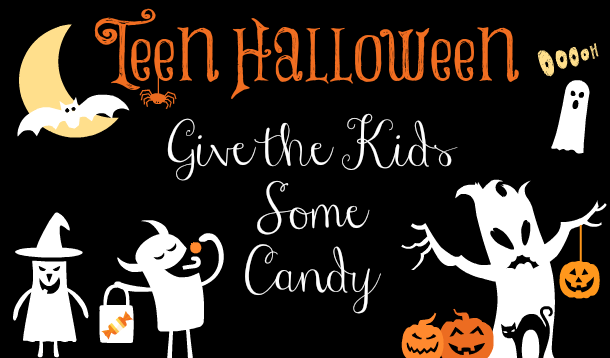 Around here ("here" being a tiny bungalow in the suburbs) Halloween is second only to Christmas on my kids' fun list. It's a sugar-fuelled, fantasy-play night out, and if there's one thing teenagers like more than the dark and bad-for-you-food, I can't name it right now because my brain is sore from high school math homework. My ten year-old loves Halloween too, but his affection is rooted firmly in the caloric: a pillowcase full of chemicals and sugar are the way to the heart of any 10-year-old boy, even if it leaves them humming like a 1970s portable radio. But older kids and teenagers love Halloween for very different reasons; most of them valid, reasonable, and for-the-most-part legal. My teenager looks forward to this holiday with a passion normally reserved only for One Direction tour announcements and the Forever 21 Fall leggings line.

She and her friends spend weeks — months even — planning their costumes. It's ping!ping!ping! here for days beforehand as iPhones announce new messages in group conversations like "Who has white knee socks for my 'Alice in Wonderland' costume?" and "Where are we starting out?" and "You guys! My mom is threatening not to let me out this year because I told her she looked ridiculous in her purple velvet leisure suit!"*

*To be fair, the suit is "eggplant" and it's velour not velvet, and I rock it.

At 15.5 years-old, my daughter doesn't go out often at night. Sure, she goes to restaurants and parties sometimes, but they're held indoors under fluorescent lighting, which, to be honest, makes people look way scarier than if they're outfitted in zombie garb and sporting a prosthetic throat slash.

Knowing how much my older child looks forward to having a night out, in the dark, dressed up — and yes —  maybe even pushing limits by wearing something normally called "inappropriate," makes me unable to turn kids away who come to my door looking for candy. Where do we draw the line? I ask why there needs to be a line. Have you ever seen or heard a roving group of 40 and 50-somethings driving house to house in their comfortable sport-class sedans knocking on doors and requesting candy? No; because "the line" is made when we know ourselves it's time to be drawn. And if you do know of such "candy gangs," please email me the next meeting date and location. 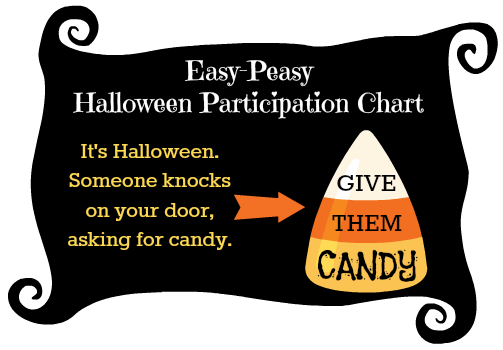 I don't expect that my teenager will trick-or-treat for many more years, only because I imagine her interests will soon turn to more frightening teenage pursuits — things like sex and beer and dancing and defiance. We're constantly telling our kids not to grow up so fast, and then in the next turn we deny them the small benefits of childhood. The years between 13 and 20 are complicated already and I don't see the problem in allowing kids one night a year to participate in what is typically perceived as a juvenile pursuit. I don't condone pumpkin smashing or flaming paper bags of dog poop on doorsteps, but if a group of teenagers makes an effort to dress in costume and knock politely on my door looking for mini Snickers, I am going to give it to them. You know what? Even if those same kids showed up in jeans and hoodies, I'd still hand over the goods. Why? Because I'm not a jerk working on a buzz-kill manifesto.

Who does teenage (or beyond) trick-or-treating hurt, exactly? As Julie Cole pointed out last year, size often doesn't reflect age. My son is lean and looks ten years-old physically. But last year he played a hockey game against some out-of-towners who, despite the roster reading "Atom," easily looked twice their age. I swear I saw one shaving when the dressing room door swung open.

Teenagers are scary — I'll give you that. They're surly and moody and they smell like border town motel carpet and they can hurt you with their words. The child you once thought wouldn't wean until college now wouldn't spit on you if you were on fire. Are we afraid of creating a generation of people who ask for things? That's sort of how the world works - ask for stuff; get stuff. It's like capitalism's pretty sister; you know, the one who put out. Let me ask you: How much candy are you getting right now, this very minute, by not asking for it? Now, how much candy would you get if you started knocking on doors requesting it? I can't say for sure, but it's bound to be a hell of a lot more than you'll get watching Big Bang Theory reruns and avoiding the sex promises you made to get out of washing dinner dishes.

Buy an extra bag of candy this year and cut the complaining about "big kids" at your door. If the added expense of an additional bag of candy is burdensome to your budget, buy a bag of those cheap weird taffy things in the orange and black wax paper and use them as filler. Consider it karma deposit, and possible "egging" insurance.

Hey there, fellow parent-of-a-teen. It's okay; you can come closer. I won't slam the door in your face or roll my eyes at you. This is a safe place. Go hide in the bathroom and get comfy — I've got some more stuff for you to read:

Do Your Teenagers Know HIV Is a STD? You Better Check

Got teens? Oh, man. It's a real trip, no? Remember when they liked — even adored — us? Well, that shipped has sailed and it's out to sea for at least the next seven to 10 years, or so I've heard. Join me here on shore; pull up a chair and read some more about teenagers. Someone will be along any minute now to take your drink order.

Great Movies to Watch with Your Teens

Why Your Teenager May Not Be Sleeping Well