Why Blue Light Isn't a "Special" At Bedtime 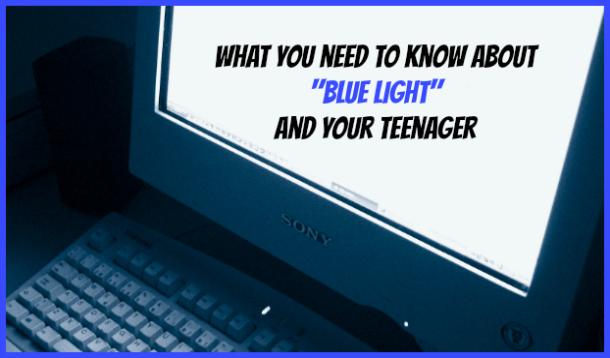 One thing I loved to do when I was a teenager was sleep. Oh dear God, how I longed for the sweet warm bliss that was my waterbed. I'd put my home-mix cassette with 25 back-to-back plays of KISS's "Beth" on my ghetto-blaster and snooze under my Eaton's duvet sleep-set until at least noon every weekend.

Remember cassettes and KISS and "Beth" and ghetto-blasters and Eaton's? Remember sleep?

My teenager loves to sleep the same way I did, although this time it's on an Ikea daybed, with The Arctic Monkeys crooning on an iPhone, and she's tucked under 300 thread-count imported sheets. I've talked in the past about how extra sleep is not only acceptable behavior for teens, it's now being touted as being so important that perhaps we should structure school days around it for older kids.

That smell is not the dog; it's vindication!

More news on teens and sleep came onto the horizon this week, when The Washington Post reported findings of a sleep study regarding teenagers and how they respond to the light emanating from electronic devices. It's the "blue light" the researchers are most concerned with, because blue light prevents the full efficacy of one's melatonin, the "sleep" hormone. I know my daughter used to fall asleep with her iPod (and then her iPhone) close by her head, until the threat of growing an additional head scared her for a while. But even after cautioning about needing double-neck holes in her American Eagle t-shirts I would still occasionally find her in too-close proximity to electronic devices. I was right, but I lack all science street cred. But The Washington Post doesn't:

"Ordinarily, the pineal gland, a pea-size organ in the brain, begins to release melatonin a couple of hours before your regular bedtime. The hormone is no sleeping pill, but it does reduce alertness and make sleep more inviting. However, light — particularly of the blue variety — can keep the pineal gland from releasing melatonin, thus warding off sleepiness. You don’t have to be staring directly at a television or computer screen: If enough blue light hits the eye, the gland can stop releasing melatonin. So easing into bed with a tablet or a laptop makes it harder to take a long snooze, especially for sleep-deprived teenagers who are more vulnerable to the effects of light than adults."

Most people (read: adults) understand that when their bodies are tired they should sleep. That's because we're not idiots like teenagers. (I'm kidding. Just their brain parts are idiots.) And luckily, for most adults, regular sleep can be achieved relatively easily. However, for teenagers who play havoc with their circadian rhythms by completely disregarding natural light/dark cycles in favor of more enjoyable pursuits like duckface selfie marathons and Netflix binge watches, falling asleep doesn't always correspond with what the rest of the world expects of them, like answering questions and walking upright. Throw in a teenager's rapidly growing brain and delight in pissing off their in-bed-by-9:30-we're-so-goddamn-tired parents, and you've got a disaster on your hands. But wait; there's more! The sleep issue for teens is exacerbated by blue light and those kids who sleep with or near electronic devices which are powered up are, well, they're screwed. Sleep researcher Steven Lockley of Harvard Medical School says:

“Teenagers have all the same risks of light exposure, but they are systematically sleep-deprived because of how society works against their natural clocks. Asking a teenager to get up at 7 a.m. is like asking me to get up at 4 a.m.”

I get it, Steven. I've been up at 4 a.m. and it wasn't prett...I can't say any more in accordance with my plea bargain agreement.

So when teenagers use glowing electronics — particularly those which emit high levels of blue light like tablets, Smart phones, and laptops — the few hours of sleep they do get is inferior quality. So how do parents (hands up — who's in bed long before their teen?) control the use of items when they're already turned in for the night? I'd like to suggest sitting your teen down and having them read The Washington Post article as well as corresponding cited studies. Then maybe a question and answer panel and a small report.

That's what I'd like to see but the reality is that teenagers often  a.) don't believe you; b.) don't care anyway; and c.) Screw you, sleep study man; where are the car keys I want Dairy Queen.

We have a "turn in" policy for iPhones and iPods after a certain time at night, but the laptop is often used for homework after I've punched out of parenting duties for the day. But people who sort of know what they're talking about suggest I get my ass out of bed and shut that shit down. The American Academy of Pediatrics recommend later school start times, and the academy believes that a later start (and thereby more sleep) will help lower teenagers risk for things like obesity and depression. And maybe better grades:  “Sleep is important for learning, memory, brain development, health,” Lockley said. “We’re systematically sleep-depriving kids when their brains are still developing, and you couldn’t design a worse system for learning.”

Looks like we're moving to a no blue-light rule in my house for the two hours preceding bedtime, in order to ward of some bad juju and maybe raise those grades a few percentages. Parents may want to rethink computers in the bedroom, especially if their kids seem to have trouble being fully present and aware in class when previous to adolescence they had been.

And here I had blamed any less-than-stellar school grades on our lack of Baby Mozart DVDs during the formative years.

Do you have a teenager? Visit my "Parenting a Teen" blog The Panic Button Years, and join me for the ride, won't you?

How's it going with your teenager? Have a question or topic you'd like explored? Leave me a note in the comments!