I Got 99 Problems and Big Boobs Are Two 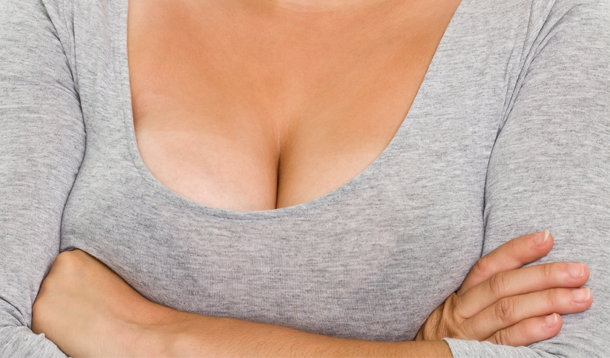 I love my body. It gets me from the couch to the fridge, and it built two reasonably well-mannered children. But, like anything we live in, it has its issues. Most homes could at some time or another use a fresh coat of paint, or broken light fixture replaced, and while that doesn’t mean you burn the whole thing down, it does mean you’re allowed to complain about the upkeep on this goddamn money pit. For me it’s my big boobs – they’re the "squeaky garden gate" of my body.

My boobs have been big for a long time. I left for summer holiday after grade five resembling your typical flat-chested elementary school student, and returned in September a shoo-in for a Vegas revue show. Many of my classmates' parents, when viewing our Grade Eight class picture, thought I was a petite teaching assistant.

Most of my younger day boob problems seem inconsequential however, because the real party didn’t start until I had children. I'm currently in DD territory, but I've seen the dark side of Fs and Gs in my pregnancy and post partum days, so, yeah; I know the struggles, and they are REAL. (Like my boobs.)

I generally don’t run unless someone is chasing me and that person is a hungry bear. There are several reasons for my dislike of quick, jump-like movements, most which can be traced directly back to my bra cup size. For one, running bras are equal in cost to a small midsize sedan, and two; they mold your tits into one giant mass of boob flesh, akin to a hunchback in reverse; and finally, sweat. I could bathe toddlers in the runoff created from "boobs on chest" when I do more than walk up a small flight of stairs. If you have anything more than a B cup and you want to exercise? Save the $150 on whatever the specialty shops try to tell you "will really work this time," and head over to the dollar store and buy yourself a roll of duct tape. They even sell it in colours and patterns now so there's no reason not to be fashionable.

Sleeping is the best. Sleep is all moms want, after quality affordable daycare and kids who empty the dishwasher. But sleeping with big boobs (SWBB) is a challenge. With big boobs, you can sleep one of only two ways – one, on your back, or two: ha ha, just kidding! Get back on your back, Chesty! Sleeping on your stomach? Who do you think you are? An “A” cup?

Seatbelts are a necessity and this is a non-negotiable. Safety first; a lifted and separated rack second. You will never find a seatbelt level high or low enough to make those canvas protective straps anything more than a tit-splitting nightmare, so stop trying. I’ve heard motorcycles are fun.

Sometimes when you are...hey! As I was saying, often you can...excuse me! This is a perfect example of...HEY! MY EYES ARE UP HERE, BUDDY.

Big boobs can severely limit your clothing choices. Those beautiful baby doll sheer spaghetti strap summer tops? Nope. Can't do it. Too much margin for error. And empire waists are out of the question except for those of us faking pregnancies on a soap opera or trying out for “Serving Wench #3” at a Renaissance Fair.

Here’s what does work:

I love to wear necklaces but they present unique challenges. They either wrap too closely to your neck and make your boobs look out of balance, or they dangle right between the girls where they magically obtain hypnotizing powers. I once wore a long chain with a pendant to the local coffee shop and no one could stay awake long enough to make me a latte. It's dangerous to the community and I'm not a monster. Or, they become caught around one breast and it looks like your left tit broke its collarbone and needs to be carried around in a sling.

There is no angle at which a selfie can be successfully taken because smart phones have a built in non-negotiable feature in their operating systems called “MBAG 2.0” which stands for My Boobs Are Gigantic and it accentuates the size threefold. D cups are suddenly FF cups and FF cups obscure anything other than your breasts from entering the frame. This makes family photos particularly difficult, especially when  you received your jumbo boobs courtesy of genetics. For instance, I have no multi-generational photos, because any four female relatives in my family cannot squish our chests into the same frame without a special panoramic lens NASA doesn't like to talk about publicly. Why do you think we see so many food pictures on the internet? BECAUSE BIG BOOB GIRLS CAN’T TAKE SELFIES.

My boobs did once get me out of a speeding ticket and I was my high school gym teacher's favourite, so all told, aside from the occasionally inconvenience, I'm happy with the girls.

RELATED: A Letter to My Breasts