Get Your Sh*t Together: A New Chapter 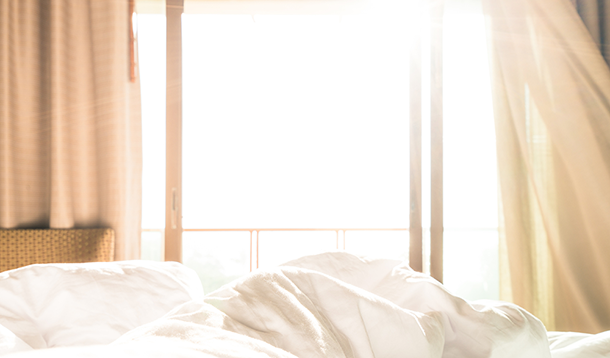 There's no cosmic "get your shit together" message stronger than an inch of water in your basement.

Our water heater - the big, hulking old tank style heater - sprang a leak somewhere in its nether regions, and just like me after birthing two babies and consuming several gin and tonics on a trampoline, she no longer holds her water. I panicked at the inch of water on the floor but not for the reasons you'd expect. I panicked because this meant a repair technician was going to come into my house, and not the clean upstairs part. They'd see my downstairs, the true belly of the beast. So I frantically emptied the laundry/utility room of all its 25 bins of crap: holiday decor, children's clothing too tight but planned for new homes, skates from years gone by, broken picture frames I don't plan on fixing, old tools and bins of rusty something or others. I moved - by hand - a freezer, countless "organizing" bins and pieces of furniture into the adjoining small rec-room/kitchen area and all but barred the door.

The repair tech arrived and determined the leak could be remedied but first he'd have to turn off the main water valve and where was that, ma'am?

It's located exactly dead centre behind the towering wall of garbage I just moved in there, and currently behind a three foot tall popcorn machine and bathtub size bin of dirt bike equipment. I had no choice but to bare my shame. After a quick assistance I was not a hoarder, I let him in.

It occurred to me that my life had become an unending cycle of simply moving piles of shit from one location to another.

As soon as he left (no more water!) I packed up six bags of "stuff" and got them out. Five more boxes awaited my return. I did not need this shit. I did not need 490 strings of Christmas lights when we use five. I want less in my life, but better. I turfed all the crap and kept the good. No more dollar store spatulas. I would buy ONE $12 spatula that will withstand the dishwasher and the sandbox.

I want less, but better.

I became unstoppable. I got rid of mugs #11 through 22 in my cupboard. (We never have that many people over and never will. If we do, I'll rent some.) CD collection? All gone. I have all that stuff on iTunes now anyway. Less, but better. Broken baby supplies, cloth diapers, all rendered (welcomely) redundant by a surgeon's snip. Out. Acrylic sweaters I bought but hated once they were washed and became pilly. Gone. I'll save and buy a good one instead of four shitty quality ones.

My new way of thinking has flowed everywhere and into every corner of my life and it feels amazing. Facebook friends lists were culled. I bought two brands of cheese instead of five but splurged on the "good" stuff. I said no to crappy coffee and bought less but better beans. The payoff increased as my enjoyment peaked. I am saving time and money; less money spent on cheap crap that breaks and needs repair or replacement, and time because I have less to clean, less to fix, less to shuffle, and less to worry about. I'm opting out of overly consumerist activities and have time and money to now move towards experiences over things. When my teenage daughter says how much she'd love to spend a few days in New York City, with me, I don't want to explain that while I too would love that, unfortunately we can't because in 2012 I bought two turkey deep-fryers, a serger I can't figure out how to use, and an ugly leather jacket that has never seen light outside the basement closet.

Less but better is incredibly freeing and I've only been at it a month now. I am on a first-name basis with the clerk at the local recycling centre, and Kijiji has put a few hundred dollars in my pocket. It's all just... stuff. It means nothing. You can want it and love it (as I do some things) but just accept and acknowledge that it means nothing. I've been to enough estate sales to tell you with certainty that "stuff" has kept no one alive past their time. It all just ends up as landfill.

I now apply the Less But Better premise everywhere. NOTHING AND NO ONE IS SAFE. Let's just say I have two kids right now but if one pisses me off he's living with his father for the summer. I AM UNSTOPPABLE.

If you do this, you will appreciate what you have more. I know I am. How can I love ALL my things? If I have unlimited things, things that when I find them in boxes I don't recall ever buying, or even that I had them at all, how can I love those things? I want to love things in my house. I want to be unafraid to have repair technicians here when we have an issue. I want to feel not like I am tied to my "stuff" with a broken bungee cord but rather tethered to my family and friends by a silken thread. It's time. Let that shit go. Keep the kids artwork but keep one piece, not 20. I have plenty of weird stuff I keep - some that would probably have you back away slowly - but only because I have room for it in my house and in my brain. I allow for zero overflow because it makes feel bad. I don't like feeling bad. I like feeling good, and ugly acrylic sweaters don't accomplish that. Good quality gin and friends who get you do.

My house isn't magically spotless — I have kids and pets and I live in the real world — but it is cleaner, and more importantly, easier to clean.

I want less but better. I deserve it, and so do you. While I can't imagine myself as a true minimalist (I love shoes and offer no apologies) this new ideology is making me feel lighter and freer and nicer and calmer and generally more pleasant to be around. Imagine that? It's there for you in the power of a box of garbage bags.

Yesterday our water softener stopped working. I can't wait to see what lessons it holds for me.

Some parting words of wisdom on "stuff" by the wonderful, smart, missed George Carlin:

RELATED: 8 Things I'd Never Put in a Garage Sale

Category:
Home - Inside Your Home
Tags:
home organizing
diy
get your shit together
water heater leak
decluttering
horder control
too much stuff
less but better