Play Along on Academy Awards Night with Oscar Bingo!

Because You deserve a treat for watching this thing

Play Along on Academy Awards Night with Oscar Bingo! 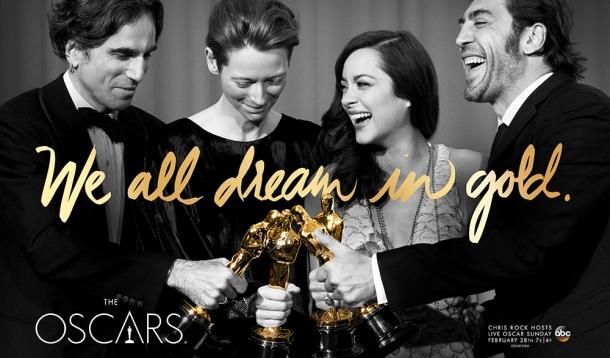 The 88th Academy Awards air this Sunday at 8 p.m., but we all know the real fun starts hours prior as we watch and judge people who are buffed, shined, and poured into unnaturally tight tubes of fabric totter down a fabric-lined street in Los Angeles' entertainment district. Woo hoo; it's red carpet time! Every year I watch, hoping someone does something really unexpected, like show up in jeans and a Metallica t-shirt, saying "Fuck! I totally forgot it was the Oscars tonight until my agent found me in a Whole Foods! She pulled me out so quickly I stole this bag of chia seeds, even!"

Every year I am disappointed when this does not happen.

This year should be interesting in other ways: many celebrities have boycotted the ceremony because of the lack of racial diversity in nominated films and I totally get that. Many people criticize boycotts as ineffective and self-centred, but I'm all for them and would gladly partake in more should I ever get invited to anything of substance. So far this year I've only boycotted a dentist appointment and a meeting with my tax accountant.

Now, I'm going to be straight with you: I have not watched all of this year's nominated films, mostly because that would be crazy expensive and probably even a bit boring. I'm also mom to a young son so Zoolander 2 was a highlight here this cinematic year which pretty much tells you everything you need to know. Basically, if it's not full of fart jokes or available on Netflix or Crave, I probably won't see it. But this doesn't mean I'm not interested! I love the Oscar broadcast and dinner the night of is hot steaming mugs of turkey gravy. Once the kids have passed out form tryptophan overdose, its time to tune in and keep score. To help you stay alert during the boring musical montages and categories no one honestly cares about (because we're terrible people), I've created an Oscar BINGO card for the occasion. It's also available here in pdf format. Do something nice for yourself (Have a drink! Paint one nail!) for each square you complete. I'll be live tweeting the event at the @YMCBuzz twitter account and playing along.

See you Sunday on the carpet (couch) in our finest (pajamas) toting swag (nachos) with the Hollywood upper echelon (toddlers)! 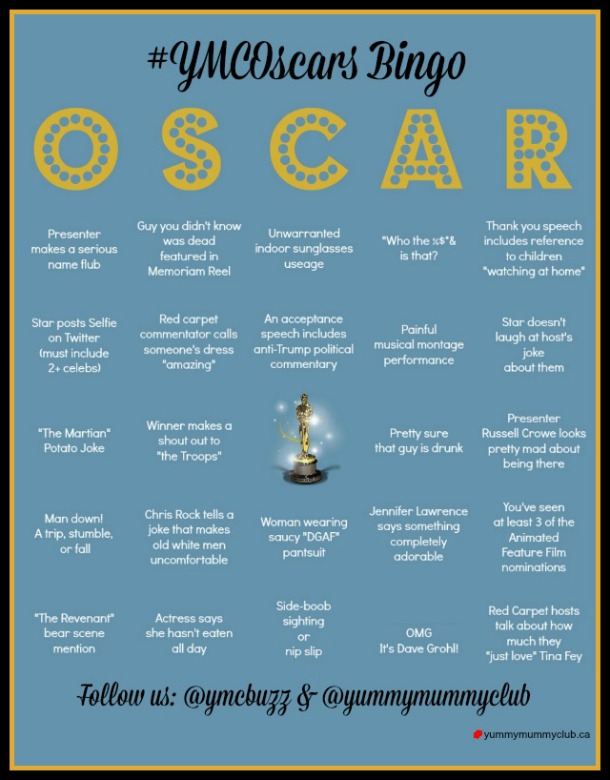 9 Months of Pregnancy in 10 Gifs

They're funny because they're true

9 Months of Pregnancy in 10 Gifs 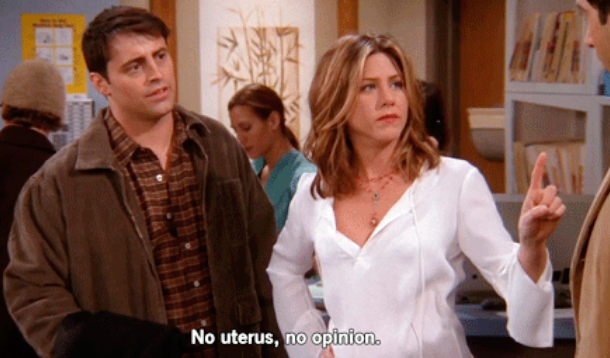 Pregnancy can be a wonderful experience.

It can also be nine months of heartburn, coming thisclose to peeing you pants at the grocery store, and wanting to eat someone's arm from hunger while simultaneously crying because an elementary school crossing guard "looked at you weird."

What I'm saying is, it's all going to be fine. You don't owe anyone an explanation for your behaviour while pregnant. YOU'RE GROWING A PERSON. If anyone gives you grief, or demands explanations for "quirks," or — God forbid — tells you you're being dramatic or delicate, you just send them this.

When You See How Childbirth Looks From the Baby Hole Angle:

When People Don't Understand Building a Person is EXHAUSTING:

When Someone Asks "Are You Still Here?" 5 Minutes Past Your Due Date:

When Someone Who Has a Penis Explains "Real Pain" to You:

When Someone Brings a F*&%ing Tuna Sandwich to a Staff Meeting:

When Someone Tries to Take the Last Whatever-Your-Currently-Craving:

When Someone Accidentally Bumps Into Your Boobs:

When Someone is Already Using the Downstairs Bathroom:

How You Feel When You First Hold Your Baby:

RELATED: Pregnancy, Donuts, and the Question You Should NEVER Ask

...court rules woman's use had link to ovarian cancer 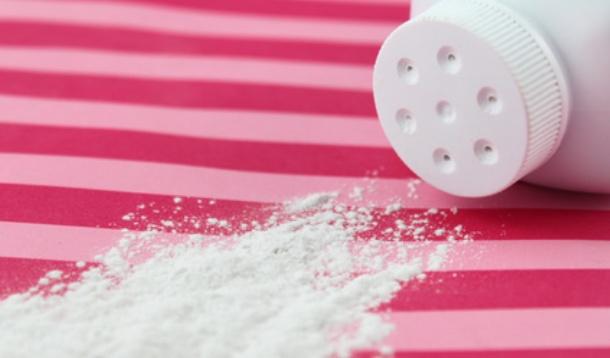 News this week that a popular baby item and common beauty product found in bathroom vanities and diaper bags everywhere is now the centre of a court ruling with some serious allegations attached. Check your supplies, read on, and do some research if wondering whether or not to continue using talc products.

Johnson & Johnson were ordered Monday by a Missouri jury to pay a $72 million dollar settlement to the family of a woman whose cancer they believe was linked to extended use of talc-based Shower to Shower and other baby powder products.

Jacqueline Fox of St. Louis Missouri died in late 2015 of ovarian cancer, only three years after receiving her diagnosis. The suit stated that Fox had been using the Johnson & Johnson product for 35 years before her death and that no risks were ever publicly associated with its use. The lawyer for Fox's family, Jere Beasley, has said that the company knew about the risks, telling NBC during a conference call that Johnson & Johnson "knew as far back as the 1980s of the risk," and that they were "lying to the public, lying to the regulatory agencies."

Many studies in women have looked at the possible link between talcum powder and cancer of the ovary. Findings have been mixed, with some studies reporting a slightly increased risk and some reporting no increase. Many case-control studies have found a small increase in risk. But these types of studies can be biased because they often rely on a person's memory of talc use many years earlier. Two prospective cohort studies, which would not have the same type of potential bias, have not found an increased risk.

Johnson and Johnson have many other (like, 100s) of suits coming up after this one, with claims stating that the company did not "warn consumers that its talc-based products could cause cancer." NBC reports company spokeswoman as saying "We have no higher responsibility than the health and safety of consumers, and we are disappointed with the outcome of the trial. We sympathize with the plaintiff's family but firmly believe the safety of cosmetic talc is supported by decades of scientific evidence."

Baby powder is a product many families use in any number of ways, and it's a staple in some homes. Just the smell of a baby powder conjures up the heady days of my own children's first weeks at home. I don't recall any warning other than the inhalation risk, and used the product liberally. And our high school changeroom smelled like the inside of a giant tube of the stuff — we all used it — again, with no apparent or obvious side effects other than encroaching on other's olfactory rights. Personally I was never crazy about the fact that products existed to convince women they were inherently "unfresh" but that was the end of my hesitation. That's what's scary about rulings like this one: that so many years later a seemingly benign product has been deemed by a court to have caused damage.