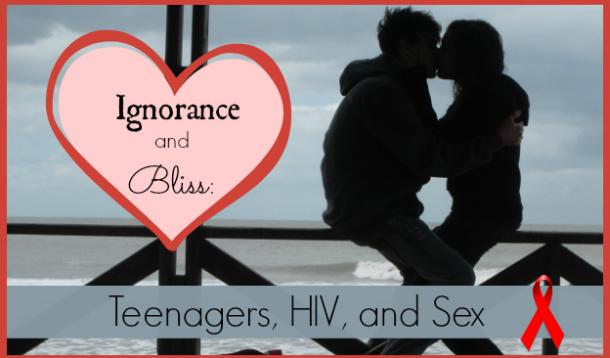 Too many teenagers don’t know that HIV is an STD.

They can tell you the middle name of each member of One Direction, how to defrag your hard drive, where to buy beer underage, and the steps necessary to dissect angles in AP math, but they don’t know that HIV is a disease transmittable through sexual activity. Vox.com recently reported findings of a sex survey culled from answers provided by American youth, and frankly, it’s all sorts of appalling.

Vox says that according to The Centers for Disease Control and Prevention in the United States, those aged 13 to 24 account for almost one quarter of new HIV infections in the US. Wait; it gets worse. Almost 60 percent of those infected aren’t even aware they carry the virus.

I am telling you right here, right now, that teenagers all over the United States and Canada are banging it out as we speak and some of them don’t even know that they can get HIV by not using condoms. I don’t care if your teenager is a “nice boy,” or “a good girl,” or “knows how we feel about pre-marital sex.” Quite simply, I don’t care if your child is an upstanding member of the community who keeps abandoned dumpster kitties alive with his own body heat — he’s still going to get boners and seek a place to put them so make your peace with it right now. Teenage girls are no less horny, and I know this because I was one. I am sorry, parents of “but we didn’t raise that kind of kid,” but hormones and biology and straight-up horniness trump good manners in almost all cases, especially in the back seat of a Dodge Caravan on a hot summer nights with an Ed Sheeran CD playing.

Most of the people who have teenagers today were teenagers themselves in 80s when news of “AIDS” started appearing in non-medical media circles. We didn’t really understand it — and to be fair, even science didn’t fully grasp all the implications of HIV — and maybe it and they still don’t. The extent of my medical training is the two hours of first-aid I took in Grade 11 health class, so I admit to knowing not too much. (The first-aid class was supposed to be a day-long event but my boyfriend and I skipped it to go have sex on his waterbed.)

I know you probably don’t want your teenagers having sex, and if you find out they did have sex you’ll probably be pretty upset and maybe even disappointed. What if you had to add some meaty chunks of “devastated” to your feeling stew because they caught an STD, maybe even HIV? If you have a gay son you need to be even more concerned because the demographic of males between the ages of 13–24 who have sex with other males has had a massive surge in new diagnoses.

The MAC AIDS Fund conducted a survey which drew the following conclusions after speaking with over 1000 teenagers. Sit down.

This is also a problem unless we’re looking to raise a generation of jerks.

Teenagers are notorious for their illusions of immortality and often they cannot look beyond the immediate and pressing future. Their brains are wired for now because of some biological bullshit that prevented them from being eaten by dinosaurs in the Triassic era. There are no dinosaurs today, except those who don’t think we should talk to our kids about condoms or sexually transmitted diseases or how the earth is actually spherical in shape. Those people need to fall in giant holes or be eaten by bears.

Have we become lax in our attitude towards HIV because it appears we are close to a “cure” of sorts, with current anti and retro viral cocktails keeping people alive? For crying out loud, does no one remember the AIDS Quilt or Pedro from Real World San Francisco? People worked hard and gave their lives to educate others, and now? No one would even have a coffee with them.

I was 18 years old the night Magic Johnson appeared on television to tell the world he was retiring and that he had HIV. The news cut into an episode of the Simpsons I was watching and I was all, whaaat? But I was heartbroken for Magic and his family because from the little I knew about AIDS and HIV, it seemed likely he would be dead very soon. He is — thankfully! — still here because of medical advances and his ability to fund his treatment. Not everyone has that opportunity or privilege and while I would never begrudge Mr. Johnson his personal wealth. After watching him I made extra sure that condoms were an absolute given in any sexual encounter I had until I was married and even after.

The cold hard truth is that HIV is still super scary shit and contracting HIV is not like catching a fucking cold.

If you find it hard to talk to your kids about sex because — heehee giggles penis vagina — print this out and leave it under their pillow.

Getting Their ZZZZs: Why It's (Probably) Okay to Let Your Teens Sleep Their Youth Away

82 Things My Teenager Thinks Are Bullshit