For two close countries, we can be very different at celebrating 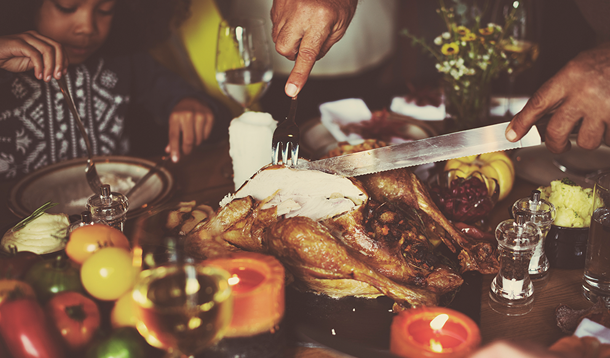 Canadians and Americans have many common interests and traditions - Thanksgiving amongst them. However, we are two completely different countries with our own ideas of how things should be done ....cough cough ...Donald Trump... cough cough... so it's no surprise that the same holiday is experienced in unique ways in each nation.

Unless you’re currently lost in a cornstalk maze or you’ve hit your head pumpkin-picking, you know that the countdown to Canadian Thanksgiving has begun. Spicy $7 lattes and rotting leaves scent the now chilly morning air, and we are less than a week from National Elastic Waistband Day. It's high time you started thinking about defrosting the 86 kilo turkey you won in the church raffle and get the kids started on the annual search for Grandma's antique gravy boat she brought wrapped in her skirts from the Old Country. (Hint: It’s in the sandbox.)

There’s a lot to do to get ready for the feasting day and there isn’t a long time to do it, but here's a quick beginners guide to help you understand the primary differences between the Canadian and American Thanksgiving holidays.

Although most Canadians are lucky enough to enjoy a long weekend for Thanksgiving, we’d all be well served to look south for some new holiday traditions to adopt, because Americans typically enjoy a four-day extravaganza when it’s their turn to celebrate Turkey Day. Yes, for not only do our next-door neighbours have the better selection of high-octane sugar cereals, they also get more time off come Thanksgiving. I’m fairly certain we can blame the metric system somehow.

Canadians celebrate Thanksgiving on the second Monday in October, while Americans have their turn a month and a half month later in late November. This is because the majority of Canadian farmland is frozen solid by November and we’d have to celebrate using only canned lima beans and what’s left of the year bumper crop of zucchini. You can put as many canned fried onions on that casserole as you’d like; no one is going to eat anything called “Zucchatravaganza” - and I’ve tried. But what really matters is that we celebrate with family and friends over an abundance of culinary riches in remembrance and appreciation for the sacrifices made by all the peoples of this land who came before us.

Americans do similarly, except they add marshmallows. To like, EVERYTHING.

Canadians are a lovely bunch and they typically go for the traditional when it comes to pies: pumpkin with whipped cream, butter tarts, or maybe a cheesecake if your family is comprised of avant garde risk-takers who don't mind their children being ridiculed for their leftovers in their lunches.

Americans bring it when it comes to dessert, with their choices often getting so crazy that I've heard tales of people offering guests pies made from sweet potatoes.

By the point we’re back at our desks dreaming of stuffing and turkey sandwiches, our Americans friends are just warming up. After their Thanksgiving meal comes the perennial American tradition: the plan of attack for Black Friday shopping sales. Flyers are consulted and routes are mapped. Comfortable shoes are laced and credit cards are loaded and ready, because what better way to further acknowledge the bounty of a fertile land built on pioneering spirit than to stand in line for a $2 musical waffle iron.

What do Canadians do?

We sit around and ponder the chances of the snow blower starting next week on the first pull.

Americans may have their football on several channels, as well as games on front lawns across their great nation.

Canadians have other athletic endeavors they take part in: first, there's the endurance event of scrubbing gravy-covered dishes or maybe the mad dash to peeing in the forest or a freezing outhouse up at the cottage before you close it for the season. In our family, we also host a yearly fist fight, the loser of which has to wash the roasting pan.

Thanksgiving is a very risky holiday. There are risks: cooking (burns), feasting (choking), sports (sprains, breaks, bruises), and family (strains from eye rolling; pulling a muscle rushing to change the topic when Uncle Fred has one beer too many and wants to talk "the bullshit state of politics in this country;" cutting yourself slashing Uncle Fred's tires... the list is endless.

These calamities could easily befall either Canadian or American Thanksgiving celebrants, but if they happen in Canada, you're only out $17 for hospital parking and a second slice of pie.

In the United States you need to sell your house and a kidney.

But no matter how distinct the differences between us and our American neighbours, ultimately we all have the same goal for a successful Thanksgiving holiday: having a relaxing day spent being thankful for loved ones and good food, and not drawing the short straw when it comes to who has to be designated driver.