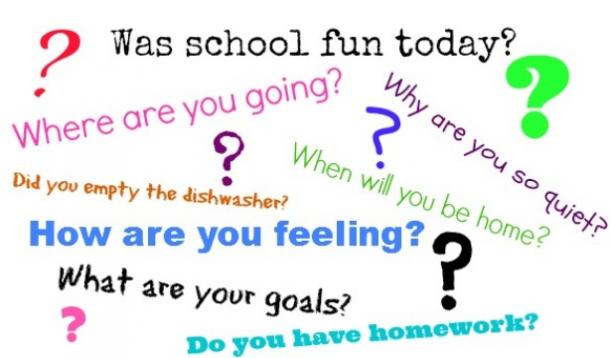 Teenagers can be notoriously quiet when it comes to conversing with their parents. My daughter will often go all day without a word uttered, but if a friend is here, they don’t come up for air unless I slide a pizza under the bedroom door. My daughter is constantly on me for asking her too many questions, and it’s true; I do. And if you have teenage kids, I bet you ask them too many questions. I do it because I’ve been a teenager; and I’ve been a substantially “challenging” teenager if we’re going to go there. By the age my daughter is now I had already—well, that’s another story for another day—but suffice to say it involved peach brandy and a small town railway underpass.

One of my issues as a parent (as a person) is that I often have trouble finding the middle ground. I run hot or cold, off or on, completely laid-back or all up in your face crazy question lady. So, if my daughter was tired of Crazy Question Lady, I would be true to form and go a 180 degrees in the opposite direction and not ask anything of her at all. This would be interesting. This would be an experiment. This was going to be very, very difficult.

So, the next day when I saw my daughter in the morning, I did not ask her if she wanted breakfast. Of course she would be hungry and starving by the time second period science was over, and I worried that she had already blown through the box of emergency granola bars I had given her for her locker. (When did I become the person who handed out “emergency” anything? I used to be fun. I used to drink homemade peach brandy under railway trestles.) However, this is not how I envision my daughter spending her teen years, and so instead I supply her with granola bars, low-sugar fresh fruit smoothies, and a healthy fear of anything “railway” related.  But rather than starve that morning, an amazing thing happened; she looked at the empty space on the counter where a quick but sensible breakfast would normally be, and then made herself a waffle. SHE MADE HERSELF A WAFFLE. SHE WASN’T GOING TO STARVE.

This was working! But the bigger test was yet to come. She came into the house after school and, where I would have started grilling her about her day, I did not. I made sure to appear cheerful, not grouchy or sullen. I didn’t want her to interpret my silence as brewing anger, so I smiled and kept working after she stood there, patiently waiting for the prosecution to begin its questioning. Was this easy for me? No.

My outward self kept its lips closed, but my inner commentary went something like this: “How was school? How was your day? How was lunch? What did you eat for lunch? Did it include all four food groups? Who did you sit with? Did you get your math test back? What was your mark? How are your friends? Are you being bullied? What do you think about the current state of affairs in the Middle East? Who would attend your dream dinner party? Do you think heaven is a real physical place or merely a state accessible only to energy which has left its earthly form?”

She disappeared into her room without the usual, “Stop asking me so many question, Mother!”

It...it was sort of nice. Sure I wanted to know how her day was, but I’m thinking that if I exhaust all her talking reserves, then she won’t have anything left for when we need to have a real discussion, like if and when she does have to deal with a bully or if she does want to talk about heaven. I don’t want to wear out my welcome on stupid stuff like her choice of lunch grain.

And then, vindication came. Yes, the best thing ever happened, and not only because it meant my instincts were right.

She came out of her room, and said to me—without prompting—“You won’t believe what happened today...”

Welcome to the Teenage Years

Once the Ride Begins, You Can’t Get Off

Welcome to the Teenage Years 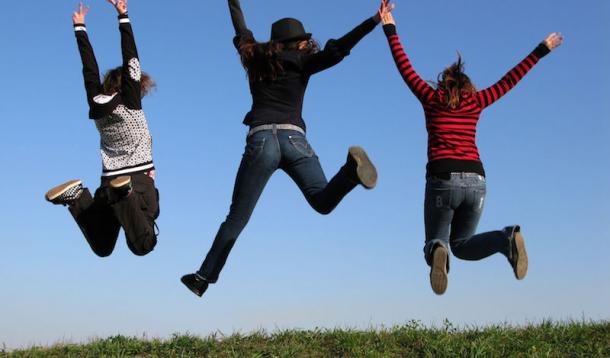 I have a teenage daughter, which, according to my nonsensical mathematical prowess, should entitle me to free chocolate until she’s twenty-one and also maybe a sparkly crown of some sort. If you have — or have had — one of these mystical teenage creatures, you understand what I am talking about. If your children are still young, and not yet spouting hair on their faces or in their armpits and smell not yet of AXE or Warm Vanilla Sugar body spray with subtle “goat” undertones, perhaps you are reading here in because you thought some preparation was a good parenting strategy.

“Why not?” you may have asked yourself. “My sweet little Michael/Olivia/Sebastian/Rainbow Sunshine Rain will be a teenager one day and so maybe I’ll have a peek to see what this whole “teen” thing is all about.” If that’s the case, read no further. Be off with you; head back into that blissful low-stress bubble wherein your only concerns are dietary needs and playdates, skating lessons and grade four homework. This here is being deep in the trenches; this is the big time. Keep your cuddly little one close, for those days will be over before you know it and the child who hold your hand all the way to the front door of the school will one day request you drop them off 3 blocks from school property in a -17 Canadian winter. That same child will also act like a perfect stranger if you happen upon them with peers in a public setting. If your child has not yet slammed a door, used $15 worth of hair conditioner in one week, and doesn’t know what “Hashtag” or “Close the goddamn refrigerator door!” means, then you are not ready for this jelly.

Don’t get me wrong. I speak with absolute sincerity when I say I love teenagers. But I love them much in the way I love the grand wild beasts of the African safari: with a great deal of respect and caution. Approaching them with food in hand is also a good idea. I think teenagers today get a bad name when the vast majority are hardworking and responsible kids who yes, make some mistakes, but who are for the most part lovely creatures who deserve second and third and fourth and fifth chances. I am no expert at this “teenager” thing, other than having been one back in (as my teenager refers to them) “Ye Olden Thymes of Yore.” And she’s right, for the most part. At almost 15, this girl is amazing in many ways. She’s bright and wry and caustic and biting and witty and frustrating and stubborn and I love her all of the time. But I don’t always “like” her and if you have teenagers yourself then you know exactly what I mean.

I hope to use this blog to start a dialogue about our teenagers, using both topical and newsworthy stories as a springboard, as well as some of my personal experience as I navigate these new parenting waters. We need each other, fellow parents. I’ve spoken to my daughter and she knows I’ll be talking about her sometimes and she’s cool with it. She knows I have her privacy and best interests at heart, and that while I may employ humour as a coping device, I have a deep respect for teenagers and the challenges they face. At least I think she knows that. When I asked her what she thought of my new blog she threw her hair back, rolled her eyes and said, “WhatEVER....”

Please let me know if there’s a topic you’d like to discuss as it pertains to teenagers. I’m looking forward to posting at Yummy Mummy Club, and remember parents of teens: We’re all in this together. See you at the liquor store.