This is Why We’re Not Coming to Your Potluck Party

It's a gelatin-salad Death Trap, but it's not personal 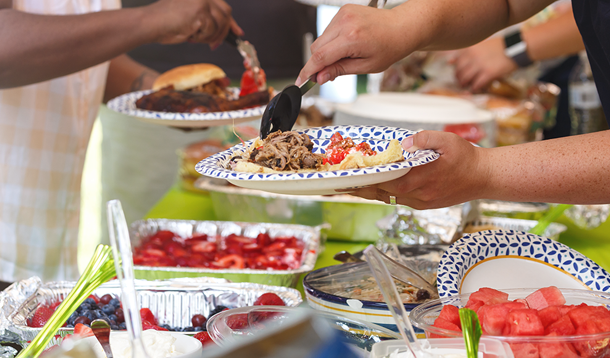 I don't consider myself a snob of any incarnation. I enjoy food which has been passed to me through sliding windows, music made from eclectic assortments of household implements, and clothing meant for someone decidedly not my size, age, gender, or biological classification. Because if I can find a sweater in just the right colour, what does it matter if it was meant for a dog? Sew up the extra arm holes, or keep them for easy bathroom access. It's all good is what I am saying.

But when it comes to potluck parties or communal gatherings where other people bring in food, I get a bit nervous about bringing my family. And by "bit" I mean "crazy levels of most definitely a lot." I get a bit "bring what I can fill-up on and/or eat before we go" nervous. Once there I'll only eat those foods which I am able to identify. A potluck is no time for surprises. Surprises are bad. No surprises ever, please, especially those involving Grandma's famous grape jelly and brown sugar. And even if the first identification test is passed there are a few other potluck criteria which must be met:

Do I know who made this?

If the answer is "no," then that food is immediately out of the question for consumption and I don't care if it's rolled in hundred-dollar bills and dusted with crushed diamonds.

Do I like the person who made the food?

No? Then no. Also, no. For that matter, why am I even here? Get the kids out of the sandbox. We have better shit to do than hang out with these people I don't like and their bowls of (probably) poisonous salad.

Have I ever been in this person's house or seen their kitchen?

This is crucial, and can only be overlooked if you have one of those really strong good gut feelings about the person. If you don't, you'll probably soon have gut feelings of an ungood sort. For all you know they could running a salmonella cat-shit lab in there. Did you know some people let their cats on their kitchen counters? CATS POOP IN BOXES AND THIS IS NOT NATURAL.

Does the chef have clean fingernails?

It can be tricky to get a good look. Try admiring a ring or asking about the bar fight that led to a particular knuckle scar. I hope the search comes up clear, because fingernails are a petri-dish of possible death scenarios. Pretend it's delicious, then hit KFC for a bucket. At least you can assume the health department has been there in the last six months.

Do they talk about how funny it was that time their kid sneezed in the frosting they helped make before offering you a cupcake?

Hahaha! Your kid is so funny and also disgusting, so NO. Here, have some of my famous dog-hair pancakes.

Does the food contain mayonnaise or have chunks of stuff submerged or suspended in other stuff?

Not doing it. This goes double for any recipe containing the word "chunks."

Does the bowl "the stuff" is presented in look like something found in a dumpster?

I know what goes on in my own kitchen and sometimes it's not pretty. I understand the Five Second Rule and I like to push limits so you need to understand that if you eat something I've prepared. Things happen. I have children. No court would convict me. But I wouldn't serve it to friends or strangers.

People ask if I eat at restaurants and yes, I do. And yes, I know that what happens there is probably way, way worse than anything you could even imagine happening in a suburban home. I get it. It's like my fear of flying in that you cannot fight an irrational fear with rationality. Don't even try because my idiosyncrasies are pretty strong and carry weapons. You can't win. I am unwinnable.

Forgive me if I give your potluck concoction the side-eye and pass it by if I overhear you in the bathroom line complaining about how you got "hot covered main dish" and that bitch Joanne got veggie side again, and how she just "dumped three goddamn cans of peas into a buttered bowl." I'm well enough acquainted with spite to understand how that probably played out in your house the day you had to assemble a fourteen layer casserole for people you don't particularly care for.

We all have our "thing" and when it comes to potluck, I'm happy to wear the badge.