Moms, Unite! We Are Smart as Hell and Canada Needs to Know it

So Why Aren't We Trying Out for "Canada's Smartest Person" in Droves? 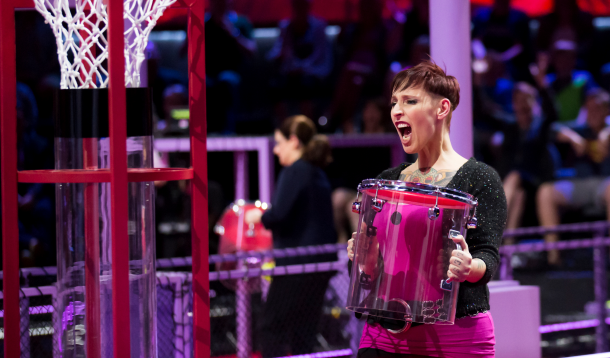 I happen to think moms are f*&!ing brilliant.

Okay, full disclosure, I am one, but I know that all aspects of my life have changed since I had kids. We all laugh about "baby brain" and while it's true that often new moms are so overcome with the new 24 hr a day responsibility, this is a temporary affliction. And while you are reorganizing your brain parts into thinking like a mom - you are, I think - actually getting smarter. I know that my problem solving skills are unbelievable now and continue to only improve since I became a parent. Who else can figure out work-arounds on the fly like a mom? Who can basically negotiate with terrorists while cooking dinner and mentally planning a trampoline birthday party where six of the eight attendees still pee their pants?

Who invented outside the box thinking?

A woman with two arms, three kids, and six appointments in one afternoon. Yep; a MOM.

Now it's time to show the world, or at least a number of Canadians with access to electricity and Internet/basic cable systems.

Canada's Smartest Person airs on CBC and seeks to find, well, Canada's Smartest Person. The show features a panel of competitors, all vying for top spot as host Jessi Cruickshank takes them through their paces. Competitors are asked to solve several problems in six areas of intelligence: musical, physical, social, logical, visual, and linguistic. The strange thing is, despite being one of the largest viewer demographics of the show, most competitor applicants are not moms. I know that personally I would be leery of an intelligence testing show based on the old tired quiz show format, but that doesn't mean anything when it comes to this show because CSP is NOT a quiz show. It is NOT a "what did you retain in elementary school obscure history show," and it's not even a "you need two Masters Degrees and a photographic memory" show. In fact, season one episode three was probably one of my favourites, as competitor Lisa Preston kicked ass in round after round to beat out multiple diploma and degree holders. Lisa says despite not being a high school graduate, when she saw an advertisement for show auditions during a hockey game at a family gathering, she was in. She says she wanted to surprise herself (and others) with her intelligence. She says without multiple degrees she doesn't fit the "conventional" image of what a "smart person" may be, but as an incredibly bright woman and mom, her skills are clear (she placed a close second on her episode.)

After I learned moms don't audition, I wanted to know why they don't try out more often for these types of opportunities. I had my suspicions about terrible "just a mom" theories  and I feel pretty passionately about this because, despite it being thousands of years past the stone age, the "just a mom" mentality prevails. We use "mom" as a diminutive in so many marginalizing forms ala "just mommy blogger" and it's bullshit. You are not "just" an anything.

I asked host Jessi what surprised her most about those competitors who do well, mom or no, and did the winners seem to have any similar traits? No, she said. In fact, Jessi feels that part of the shows appeal comes from the fact they don't: "That’s what is so great about this show- no two competitors are ever alike… in fact, I am constantly surprised by the vast range of people who excel on this show- we’ve had high school dropouts and stay at home moms out-smart scientists and professors. We celebrate real-world smarts, not just book smarts so it really allows all different types of Canadians to shine."

She adds, "Unlike most reality competition shows, we aren’t just looking for over-the-top personalities (although don’t get me wrong, that helps!) we are looking for real people from all walks of life with natural charisma and intelligence. So, don’t be afraid to show us who you are, why you are smart and DO something to stand out! If you can put together a memorable audition tape, we already know you’ve got social smarts!"

Did Jessi think moms needed any specific words of encouragement? After all, they're watching but not applying. "I know I am supposed to be the ‘unbiased’ host here," she says, "but I must say, I LOVE it when moms compete on our show. Not only is it amazing to see how proud their kids and spouses are cheering from the sidelines, but it gives these brilliant women a chance to shine in areas of intelligence they may not have had the opportunity to put on full display since having kids."

Couldn't agree more. The fact is, if you’re a mom, you are constantly using all six areas of intelligence. Do you juggle kids and parents and play dates daily? That requires social smarts! Can you colour co-ordinate a sock drawer? Visual Intelligence! Can you sing a lullaby in tune? Musical Intelligence! I once had a mom tell me that competing on the show was the best thing she ever did for herself- it reminded her of all she was capable of. Your kids know how smart you are, now come and show the world…. Auditions for Canada's Smartest Person are open now for next season and will remain open until July 24, 2016, so there's still time to apply.

Season 3 of Canada's Smartest Person airs this fall on CBC.

Jeni Marinucci: Panic Button Years How to Get Your Sh*t Together