Read This & You Can Quit Doing Laundry Forever

Come down from Laundry Mountain 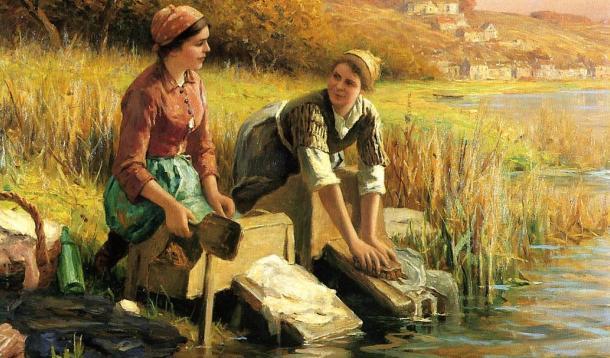 I hate laundry with the passion of a woman who's been scorned, is drunk on Shiraz, and has access to your private cell phone number. I hate it the way dogs hate cats, snow hates sunshine, and fundamental conservatives hate women.

I HATE IT AND EVERYTHING IT STANDS FOR. If it were a person, I'd punch it in its dirty, rotten face.

Laundry is the worst household chore because it never ends, and there are too many steps to its completion. Gather, sort, load, remove, load, remove, fold, put awa....NOPE. I'm a "once and done" kinda gal and laundry does not qualify under this parameter.

One of the things I love about humid Ontario summers is wearing wet clothes right from the washing machine. You get a custom “to your body” fit and built-in cooling-mechanism. Plus, no drying or folding! And it's eco-friendly. We are saving the planet and our sanity!

But summer has turned and run, and my family's laundry pile qualifies as one of Canada's highest summits. I am so done with this bullshit, but I couldn't see how to solve this problem. Maybe I need to harness the power that is the diabolical brain of a elementary school child, and so in efforts to reduce our laundry load, I turned to my 11 year-old son for help. He doesn’t like parting with his worked-in (read: filthy) clothing for washing, and I’m sick of having philosophical discussions about “But what is dirt, anyway?” with an ornery 6th grader while playing tug-of-war with a disgusting crusty pair of tiny blue jeans.

As it turns out, if I follow his recommendations, I won’t need to do almost any laundry ever again. This should cut down on my household workload by almost 37% after you account for my daughter’s 432 Aeropostale t-shirts. So, if clothing or linens do not meet his “dirt” qualifications, I’m not washing them.

It is not dirt if:

It’s not dirt if it came from your own body.
I’m not giving specifics here. Let’s just say if it came from an opening somewhere on your body, it apparently doesn’t count as dirt because “You said our bodies are beautiful, Mom.”
It’s not dirt if it makes a mark smaller than a quarter.
In essence, you can wear a shirt with 138 patches of mud on it, so long as their individual size does not exceed that of a .25 piece.
It’s not dirt if it’s fresher than 24 hours.
"Fresh" and "dirt" cannot co-exist in his dimension. Time makes dirt and one full day is required for proper formation.
It’s not dirt if it was garnered in the act of performing a task requested by an adult.
Chore dirt displays lack of agency and is therefore exempt from punishment by washing.
It’s not dirt if it is food-derived.
BBQ sauce, eggs yolk, jam, or roast beef juices are not dirt, but rather delicious snacks for later.
It’s not dirt if someone else put it there.
Sidewalk chalk up and down your back that you are not aware of because your sister was trying to make you look like a skunk because you never wash your clothes is exempt. It is also a good example of what I refer to as “the laundry wormhole.”
It’s not dirt if you can’t see it from the front.
All dirt on the back of your clothing is exempt. If you can't see it, how can it matter? This kid could give Schrodinger a run for his money.
It’s not dirt if it doesn’t smell bad.
See #3 - “freshness” criteria. If it smells good, say, like hot dogs, that adds to the allure.
It’s not dirt if there is an inkling of creativity involved.
Markers, paint, glitter, 6 pompons and a Popsicle stick inadvertently glued to a sleeve must remain intact to preserve artistic integrity and to prevent accusations of censorship.

There may have been more qualifications, but if there were I didn’t hear them. The smell of his laundry basket was too much for me to take, and I had to leave the room. If you have any ideas, leave them in the comments.

These rules can be extended beyond laundry as well, and work equally well when applied to bathing or hair washing. And while I look forward to the day my son becomes a fully independent and responsible member of adult society, someone please point me towards this post if I ever consider eating dinner at his house.

RELATED: The Fun Game That Will Get Your Kids To Put Away Their Clothes

Category:
Home - Inside Your Home
Tags:
laundry tips
parenting humour
scaling laundry mountain
why do kids create so much laundry
advice from our children