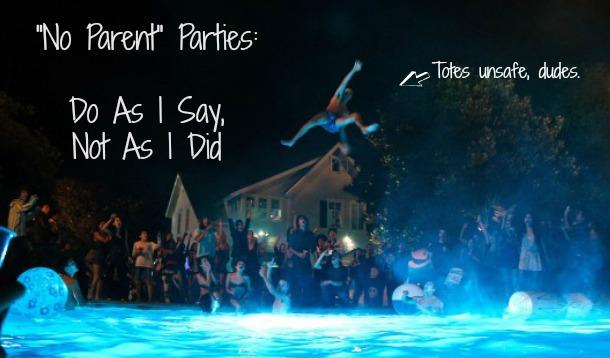 My daughter wants to go to a party this weekend.

She’ll be 15 in a less than a month, so a Friday night party isn’t completely out of the question, nor is it an inappropriate request. But she's not going, and I'm the bad guy here. The kicker? No parents will be in the home.

She was completely honest about that, so points in the "character" column, yet she was surprised when I told her hellll no. Look, I’m no fool. (I am also 41 years old and I shouldn’t be allowed to go to parties where there aren't parents in attendance.) In this case, I'm being told the parents in question are completely on board with the party so I replied that if I could call them and confirm this I would consider letting her go. Of course the dream died right there and then with an audible eye-roll and the matter was dropped.

Here’s the thing: I believe my daughter when she said the parents know about the party — it’s the mortification of having her mother call them to confirm that stopped the good-time train in its tracks.

I know that one day soon she'll either a) lie about where she’s going or b) “forget” to tell me the owners of the home are currently floating on a cruise ship in the Pacific while she and 100 friends are floating on the homeowners couch in the family pool.

(If you don’t think this happens at house parties, we didn't run in the same circles.)

I went to house parties all the time when I was a teenager — even at her age — and this is exactly why she won't be going. IT'S BECAUSE I KNOW WHAT HAPPENS THERE. Yes, despite my being "ancient" and "out of touch" I still have enough recall in my obviously degenerative brain to remember the shit we caused. My town was small when I was a teenager; we had no bowling alley, no arcade or restaurant willing to host teenagers for more than an hour or so, and for a while we didn’t even have a movie theatre. Everyone got their driver's license the minute they turned 16 and back then if you could tell a stop sign from a speed bump you passed and were driving by the time the smoke on your birthday candles cleared. We’d load as many people as possible into the back of an old Bronco or Parisienne and we’d head out to the nearest vacant house or farmers field or abandoned quarry. We drank and we smoked and we did stuff I’d prefer to not think about in the same context as something my own children may do one day.

You could easily argue that I did all of these things and I am fine. (You could also argue that I am most definitely not fine.) But I lived, right? Yes; I did. But some didn't.

I know I can’t protect or shield my daughter from every possibility and one day she’s going to have the chance (opportunity? Ugh; I’m trying to frame this as quasi-positively as possible) to prove she has a good head on her shoulders. But having been a teenager myself, I know that even though you may think you are the smartest person in the room, you are not. You are high on Axe and pimple cream.

I don’t tell my daughter all of the things I’ve done. I give her tidbits, but not everything. I don’t need to give her any ideas, nor do I want her to think I condone semi-illegal activity had in the name of teenage debauchery, no matter how much fun we had. So if she asks, I will tell her I spent my youth growing organic vegetables at a nunnery which we sold at a roadside stand to fund schooling for blind third-world children. If you promise to keep my secret, I will tell your kids that you were with me.

Read more from Jeni on Teenagers:

Your Teens and Their Friends: A Whole New Ballgame

Jeni Marinucci: Panic Button Years What You Should Do About Unsupervised Parties And Your Teen