I Need To Stop Swearing

SH*T THIS IS GOING TO BE HARD! 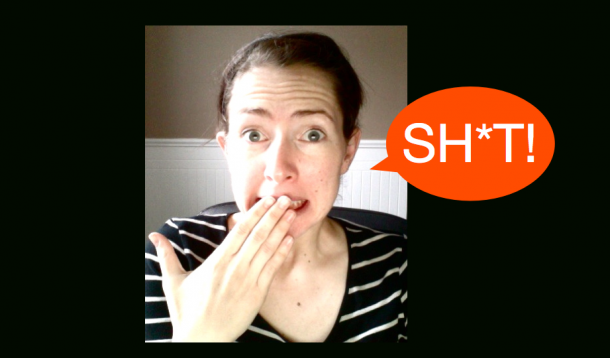 I've recently crawled out from beneath a pile of boxes, since we decided it would be a good idea to move five days before Christmas—which was just about as good of an idea as the time I decided to try to give myself a Brazilian. Sigh. Anyway, we are all settled now (no we aren't), and I've taken some time (five seconds) to think about goals for the new year.

I've come up with one so far: I need so stop swearing so f*cking much. You might not know it by looking at me (I've been told I look sweet and innocent), but I have the mouth of a trucker—a filthy, dirty, ball-licking trucker. I don't know where I get it from, and I don't particularly know why I do it. Maybe it's my way of rebelling. I don't smoke, I don't do drugs, and I'm not in a gang, so I swear. And I f*cking swear a lot.

I also really like making up creative swear word combinations on the fly, whenever the mood strikes. "Yeah, the guy cut me off in traffic. So, I honked at him and said 'Get out of my way you Nipple-Tweaking-Bag-Sniffer!'" It might not make a lot of sense, but I'm okay with that. It makes me feel better, and I enjoy doing it.

The only thing is, my son is now ten-months old, and is starting to build his vocabulary. So far he's said: Mum, Dad, Nana, and Ball . . . and I'm starting to worry that his next word might be "licker." So, I really need to stop swearing.

Except, I don't want to stop swearing.

I don't want to become one of those parents who say things like, "Oh fiddlesticks!" when they stub their toe or forget their cell phone in the car. Aren't swear words all about the context? If you say fiddlesticks when you're mad, and say it in an angry tone, isn't it essentially the same thing as saying a real swear word? Sort of? Maybe a little bit? No, I didn't think so. Sh*t.

But I know I need to stop doing it, or else when my child goes to daycare, he'll be that jerk who is teaching all of the other kids bad words. Doesn't that make him a leader though? And isn't that what we want? For our children to be leaders? (I feel an inappropriate Hitler joke coming on, and feel like I should censor myself before I get angry replies to this post.)

Okay, okay. I'll accept defeat, and make a conscious effort in 2013 to stop swearing; however, as a creative person, I refuse to say the standard swear-word-replacment-words like I mentioned above. Instead, I'll find new words and phrases to say when I'm angry, like "Yeah, that guy cut me off in traffic, and I said 'Hey! You mouldy-cheese-eating-foot-sniffing-dog-kicker!'" Sh*t. Even that sounds lame. Sigh.