ME & MY BREAST-MILK COLLECTION OBSESSION 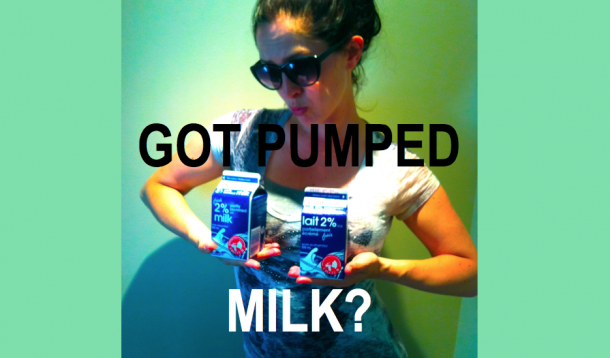 So I've realized I'm a hoarder. A hoarder of my own breastmilk. It's like a stamp or antique spoon collection. I love to open the freezer and look at the bags of frozen breast milk. I count them. "One, two, three, four..." and then I add up how many ounces I have and fantasize about all of the things I could do with so much frozen milk: I could get a massage! I could go for a pedicure! I could have 4 glasses of wine...in a row!

Except...I never do any of these things. I just keep collecting. "One day, one day I'll use this milk and it will be glorious!" (Insert evil scientist laugh with echo sound effects)

So why do I have this proud obsession with my breastmilk collection? I have no idea. I guess I just still think it's pretty cool that my body is producing this liquid gold that is helping a baby human grow (and grow fast, might I add!)

And to think, 3 months ago I was SCARED of my breast pump! Terrified, actually.

"I'm supposed to take my precious nipple, and put it...where? In THAT thing? What if it sucks it right off? Is there an eject-nipple-button?"

But I was determined to start my little collection, so I bit down on my lower lip, took a deep breath, and suctioned my nipple.

My quivering finger pressed the "start" button and I closed my eyes. Turns out, I should have kept my eyes closed. A nipple does NOT look pretty in the transparent plastic suction thingy—and you almost don't want to know how long your own nipple can stretch. Holy crapballs, Batman!!! The human body is a pretty amazing thing.

We really are mammals (our Science teachers weren't shitting us) and this has truly been reinforced to me since having a baby. Breasts are no longer sexual objects, they are feeding tools. Gawking at them and making sexual gestures now confuses me. "Are you hungry Mr. Dirty Construction worker? Is that why you're whistling and pointing? I can go buy you a sandwich if you like."

My poor husband. At least he's a butt man, and I don't need my butt to feed my baby. He's still allowed to squeeze that.

Okay, all of this talk about breastmilk makes me want to go and pump again. Then re-count my collection...

Confessions Of A Weird Mama

CUZ WEIRD IS THE NEW BLACK.

Confessions Of A Weird Mama 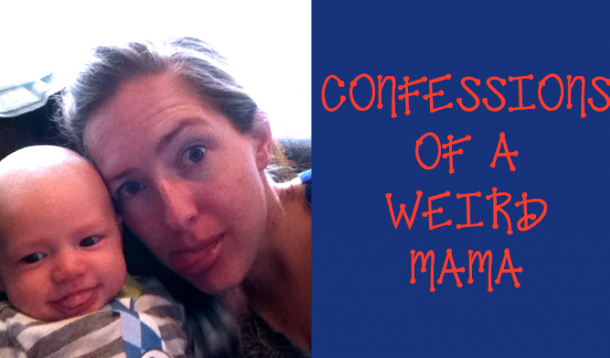 As I sit here with my baby snuggled up on my chest asleep, I'm stroking his peach fuzzy head with my lips. I feel like a cat grooming her kittens. lt's one of my favourite things to do. I close my eyes and inhale the baby smell as I mould his hair into a mini mohawk with my lips. Strange? Perhaps. But us mothers do tons of strange things. We sing strange songs, we make strange faces, and we have strange "tricks of the trade" to help our babies sleep, eat, feel comforted etc...

I've always known that I'm weird, but I've embraced that weirdness even more as a new mom.

Here are some of the things I do on any given day:

I make up songs that are really bad. Seriously. I'm normally good at making-up clever rhyming songs on the spot (thank you improv experience) but when it comes to singing to Cole, for some reason my songs suck. Maybe it's cuz I sing so many in a day? They usually sound something like this:

"Cole is a baby, who has a head. He sleeps in a bed. Look at his feet—they're small. Maybe they're big. Do you want to wear a wig?"

Yeah. Terrible. The worst part is that I have no musical ability, so there is no tune either. It's horrendous and awful. It pains me to hear myself sing these horrible songs - yet I do. I should really just put in the customized CD that Candace gave me and be done with the singing all together...

Something else I do is dance for Cole. He'll be looking at me with his big wide blue eyes as if I should be doing something. So I dance. He doesn't laugh at my moves, he just continues to stare. That's when I realize I'm a giant loser, and stop but not before saying "One day you'll think this is funny." I doubt he will.

Another thing I like to do is pick Cole's toe jam. Yep, that's right. Have you ever looked in between your baby's toes? There is a gold mine of lint in there and it is super fun to pick at! Maybe you think I'm disgusting—but MOST women I know love to pick things. Or maybe I just choose to associate myself with these types of women? Hmm. Maybe. I am "picky" about my friends. Haha. Bad joke. But seriously, I have a problem. I get excited when he has a booger I can get at, or a piece of skin that is flaking off. Did I just make you gag? I'm sorry. Just another part of the Mama-cat-grooming-experience I guess.

Anyway, those are just a few of the strange things I do in a day. What about you? Do you have any weird Mama-baby routines you're brave enough to share? Or are you going to make me stand alone in the shadowy corner as you all laugh and point?

;) Just kidding. Laugh and point all you want, I'm okay with it.

Diaper Genie Grant Me My Wish

Diaper Genie Grant Me My Wish 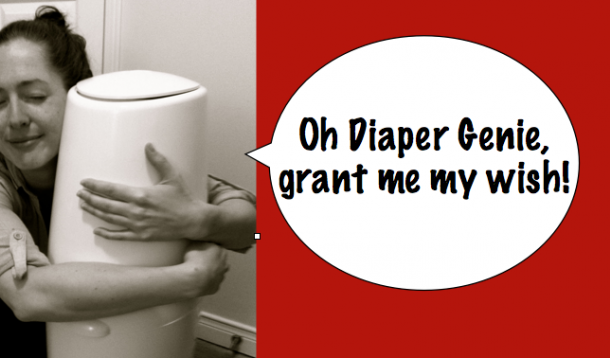 I'm going to start this post off by admitting that I had originally intended to use cloth diapers. I even went so far as to order several pairs online. I am now selling those un-used cloth diapers on kijiji (please reserve judgment. I recycle! I compost! I take public transit...when I'm not driving!)  ;)

Anyway, now that I'm changing 12-15 dirty diapers a day—there is a new love in my life and his name is Diaper Genie.

I found myself cuddled up to him in the middle of the night, rubbing him and asking him for three wishes.

My first wish was for more sleep (no luck). My second wish was for a much needed pedicure (no luck. have you seen my chipped toenail polish?). And my third wish was for a convenient way to dispose of my son's dirty diapers: alas, a wish he could grant!

And grant that wish he did—in style!

Did you know that I can fit up to 38 newborn diapers into that sleek device? I just step on the foot pedal, insert the dirty diaper into the open "mouth" of the genie, and that’s it! Amazing! And would you like to know what else is amazing?

I ASSEMBLED THE DIAPER GENIE MYSELF! This says a lot, because I HATE reading instructions. I'm a fan of improvisation, but that doesn't always work when trying to put something together. But this was super easy. A few clicks and it was done. My attention span was still in tact!

Now I know you're all probably wondering, "But Jen, what do you do when you're out and about? Surely you can't take a 3-foot diaper genie with you!"

Well, I tried at first. I buckled him into the passenger seat of the car but it didn't travel so well. So I called Playtex and said, "Hey Playtex! What's up? (We're casual like that) I was thinking that you guys should design an on-the-go Diaper Genie." And then they said, "We already have one! It's called the Diaper Genie Portable Diaper Bag Dispenser." Genius!

Anyway, so I started using the portable bag dispenser, and it also rocks (and the plastic bags smell like lavender! Which can also come in handy when you bump into a friend on the street and realize you forgot to put on deodorant... Whip out a bag, give your pits a quick rub et voila!) Probably not what they were thinking when they designed the product, but I'm innovative, what can I say?

But seriously, these little bags & the dispenser are great. They're very much like doggy poop bags that can attach and clip onto your bag or stroller. I'd much rather put a used diaper in a scented bag when I'm out and about rather than hold onto the stinker and remember days later that I've forgotten to dispose of it (this MIGHT have happened to me in the past...)

Alright, I should wrap this up. I smell something—and I think it's a dirty diaper....