And that's only in the first four years 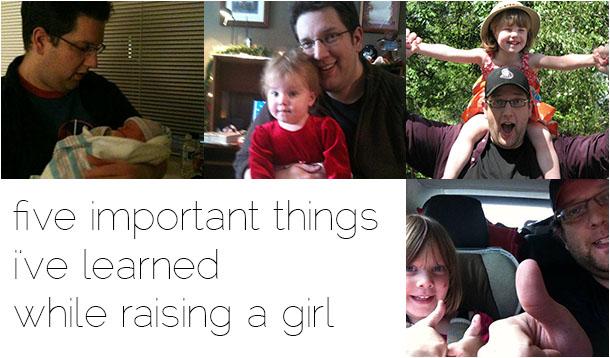 After less than four-and-a-half years in the job, I've already learned some valuable lessons as the father of a daughter. I've learned a lot about my daughter, myself, and the world around us, of course—more than I could ever condense into a single (readable) blog post. But these five things stick out as being fundamentally more important than most:

1) Sexism is real. And prevalent. But we can all help expose it.

Ok, the first part is sort of a no-brainer. Of course sexism is real. But what I didn't know was just how prevalent and pervasive it is. But with more and more women and men calling it out (which is, of course, encouraging), and thanks to the good work of groups like Everyday Sexism, it's harder and harder to deny there's a serious problem. And knowing that my daughter is going to be growing up in this world, it makes me more inclined to call it out when I see it, too. One person probably can't change the world on this issue. But a lot of people can.

2) Casual sexism is dangerous too.

The thing about blatant sexism is that it's easy to identify. Casual sexism is a whole different kettle of fish and it's one that's a lot harder for people to attack, because it is often done unintentionally or, at the very least, under the guise of humour. Hell, it's something I'm guilty of from time to time. I think we probably all are. We use some misogynistic or sexist term to describe someone because it's become cultural shorthand. He's being a bitch. She's a prima donna. As a sports fan, I see a ton of this. Quick, ask a hockey fan what they think of Sidney Crosby. "You mean Cindy Crosby?" Cause being a woman is an insult, you see. But just as using fag or retard as a pejorative normalizes homophobia and discrimination, using misogynistic and sexist language normalizes sexism. I find myself a lot more sensitive to this lately, but it's not always as easy to call out as more blatant forms of abuse can be.

I'm doing my best to fight the fight for my daughter, but there's one thing I can't be that my wife can—a living, breathing example of how to live your life as a modern woman. My wife is strong. She's independent. She's smart. She's proud. And she's making my daughter all of those things, too. I got to talking with one of my coworkers the other day, we both know guys who talk down to their wives, both in person and, more upsettingly, behind their backs. We've both sort of come to accept that this is just how some couples are—that the wives are likely doing the very same thing and that this is just part of their natural rapport. But I can't fathom talking about Amy that way, because I truly respect and admire her. And I'm proud of her for being the way she is. Why shouldn't I celebrate that? Honestly, I can't imagine being with someone I don't respect that way.

This relates strongly to the earlier points. I think one of the reasons I never realized how prevalent sexism—both blatant and casual—can be is that I was raised in a family full of strong women, and men who respected them. My parents love and adore each other; my grandparents are the same way. And nobody who's met my mom or grandma would ever think they were soft, weak, or inferior. I love that my daughter is surrounded by strong women. I'm glad she gets to see the way a man should react to a strong woman. I guess I've always known my family was this way, but having a daughter certainly makes me appreciate it more.

5) Being a feminist is cool!

Feminism, to me, was always one of those things. I mean, sure, I believed in equality. I respected women. I treated them well. But feminism? That's a bit . . . much, no? A bit radical?

One of the biggest things I've come to understand and accept in the past few years is that feminism matters. Strong women need to raise their voices and they need their allies to do the same, because the fights aren't over yet. Sure, women have it better today than they did a generation ago, but that doesn't mean they have it as good as they should.

And so, if the women who are committed to that fight are comfortable with the label "feminist," then so am I.

Check out this ad, which nails the double standards at work.

Daddy discrimination exists, too! Stay-at-home dads tow the line just as well as moms, but aren't given the credit. We need to change this.