We've been through some good times together, koosh ball 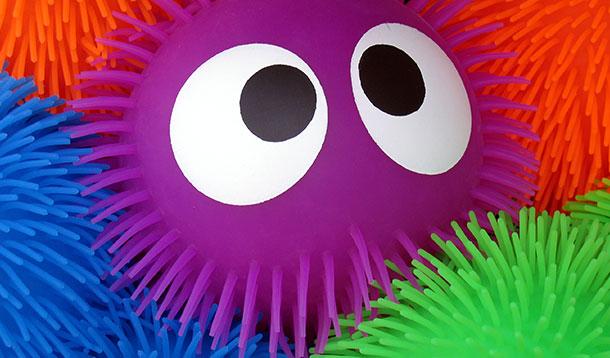 Nah, just kidding. This isn't an ode to a stupid little toy from some random dollar store. And do you know why? Because nobody loves those toys.

Yet they're completely freaking ubiquitous. They're everywhere. From rec centre vending machines to birthday party goodie bags, you can't go anywhere that parents typically go without a rubberized grabbing hand reaching out for you.

And unless the basic tenents of our capitalistic society change in a big hurry, these things clearly aren't going away. Supply and demand and all that. After all, these stupid little trinkets are the lifeblood of the dollar store economy and I've got my choice of six of those joints within a six kilometre radius of my house.

So clearly someone is buying this crap by the pallet load.

But here's the thing. These toys? They suck. They're terrible. They have an average lifespan of about 20 minutes in my house and I'm sure it's not much different in yours. From the moment they're dropped on your table at your local chain restaurant (or, if you're really lucky, plucked from the magical treasure chest!) or pulled from your birthday party lootbag or ripped from those godforsakenly-difficult-to-open stupid plastic egg things, they're lucky to last as long as your average Zamfir panflute solo before they're tossed aside.

College students aren't opening up care packages from home and getting misty-eyed because mom remembered to pack Skippy, their beloved mini rubik's cube. Retirees aren't looking longingly at their now-grown child's old mini NFL helmet as they finally sort through the boxes in the attic as they prepare to downsize.

Yet these koosh balls and crap are backed by a mind-bogglingly wasteful supply chain. Think about it. Firstly, they're all made of some form of rubbery plastic stuff. I'm gonna go out on a limb here and assume that's petroleum based. So it's drilled and pumped and refined and coloured and whatever.

RELATED A Unique Way to Recycle and Upcycle Your Trash

Then it's turned into whatever whacky shape the creative minds at UbiquiToy Co. can come up with.

Then it's trucked to some warehouse.

Then it's put on a freaking ship and sailed across the ocean.

Then it's put on a truck and trucked to another warehouse.

Then it's trucked to a store.

Then some schmuck buys it.

Then it's played with for all of 39 seconds.

Then it's thrown away.

Look, I'm not an idiot. I know I'm up against some grand global conspiracy of oil companies and logistics companies and toy companies here. You can't fight Big Dollar Store. I know that.

But maybe, just maybe, we can tip the scales a bit. Maybe next time you host a birthday party you stick to candies and crayons in the loot bags. Maybe next time you go to a restaurant you quietly ask the server not to bring by the magic tickle trunk of terrible toys ($20 says your kid won't even notice). Maybe you stick some chewing gum in the vending machines at the rec centre* - your fellow hockey parents will appreciate it even if the kids don't.

The tyranny of cheap plastic toys must be stopped.

* The Naked Dad and Yummy Mummy Club accept no responsibility or liability for damages caused to rec centre vending machines as a result of this article. This article is for entertainment purposes only.