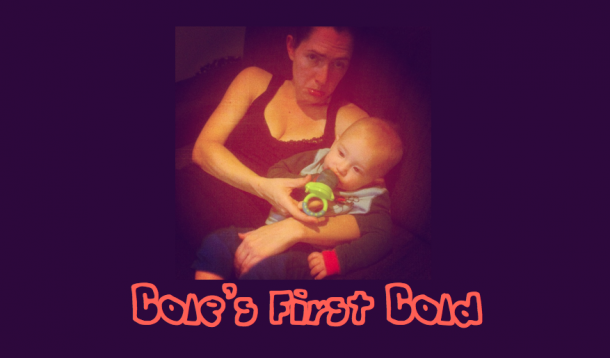 My laptop is currently propped up on my counter so I can stand while I type. I'm swaying back and forth to keep my baby asleep in his carrier, because he won't nap anywhere else. He has his first cold :(

I must say, we've been lucky to make it almost nine months without as much as a sniffle. I guess I was just hoping he could hold off getting sick until he was at least...five. Or fifteen. Or fifty. He's pretty advanced (of course) so I was hoping he had also developed an immune system of steel and would simply avoid getting sick. Ever.

Sadly, however, I've come to the realization that my kid isn't superhuman. He is bound to get sick. And I suppose it's also a right of passage in a way—isn't it? Every mother needs to get barfed on, sneezed on, peed on, and pooped on.

And can we go back to the sneezed on thing for a minute, and talk about how much SNOT an infant can produce? I think I've wiped up his body weight in snot in the past 24 hours. I'm constantly following him with a box of tissues (or my shirt sleeve when I forget the box) and I just can't seem to stay on top of it. He loathes when I try to wipe his nose, so I've had to develop clever sniper skills to get in there with the tissue. Poor little dude.

I also feel badly, because I'm constantly shoving a thermometer up his bum. As if having a fever and feeling like crap isn't enough, I have to pin him down for a diaper change (which he loathes on a good day) and try to trick him by singing happy songs while I quite obviously make him very unhappy. "Skinamarinky dinky dink" is only so charming when sung while being anally probed. Come to think of it—he might have some strange associations with that song later in life. Maybe I better change up my musical repertoire while checking his rectal temperature. Hmmm. *Note to Self*

In all seriousness though, when he did spike a fever, I panicked and was glad to have read this article by YMC's Dr. Kim Foster back in September. I re-read it again. Fevers are scary (everything is scary for the first time) when you're a new mom.

Alright. It's time to try and get this little dude to nap in his crib so that I can try and wipe some of the snot off of my furniture. And the floor. And his toys. I basically live in a big snot bubble right now. Yes, you're welcome for that image. (And I apologize to people like my friend Kristen, who are probably gagging right now thinking about all of this snot.)