Did You Love Or Hate Madonna's Half Time Show?

This Madonna Fan Felt Let Down 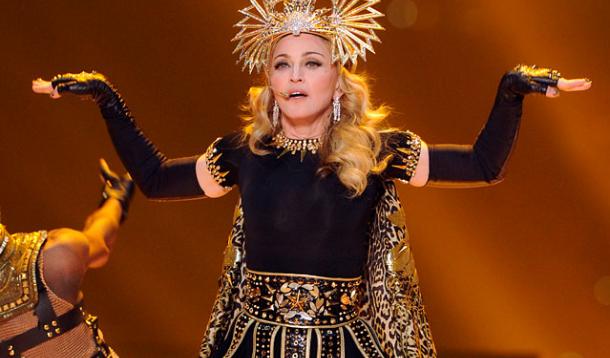 Alright, let’s get this out there, I did not love the Madonna Half Time Show at the Superbowl. I didn’t hate it, but I definitely didn’t love it. And I wanted to love it, because it’s Madonna after all, and if Madonna can’t give us the best damn half time show in all of Superbowls then I’m not sure who can.

Maybe it was the hype—because it’s a big show and there’s as much talk surrounding the half time show as there are the teams who are playing. Maybe it was because Madonna kept giving interviews talking about how nervous she was and how it was going to be the best 12 minutes we’ve ever seen. Maybe it’s because unlike Springsteen or The Who or Paul McCartney—all who performed recently at Superbowls, I am a huge Madonna fan so I just assumed that I would love her performance. But I didn’t and here’s why.

Madonna started by being carried out on the field by gladiators as she sat on a throne wearing some  kind of Cleopatra style head piece before launching into Vogue.  Really? She kicked off her set with Vogue—wouldn’t have been my choice.  Then there were the backup dancers who were great but very distracting because they were dancing very close to Madonna and it was a lot going on for the frame of the television. I was also a little confused by the Egyptian theme.

Madonna then segued into Music and this was one of the parts of her performance I actually enjoyed because she looked like she was really having fun!  Because she didn’t look like she was having fun before—she looked like she was trying to make sure it was perfect. But perfect is boring and I found her performance just kind of boring.  Then she joined the boys of LMFAO on stage to sing Party Rockin’ and Sexy and I Know It and all I could think of was that Justin Bieber did the same thing, first, at the American Music Awards.

And this is essentially what bothered me the most about the half time show.  I love me some Madonna, but I love Madonna because she’s a badass bitch that blazes trails and shows the young kids how it’s done. That Madonna didn’t show up to the Superbowl. This Madonna seemed like she was trying to hold on to what she once had because she hasn’t figured out what she needs to be next.

And let’s talk about the pompoms for a minute, ok?

Look, Madonna is in her '50s and looks a.maze.ing. No doubt. But I don’t want to see Madonna jumping up and down on bleachers with pompoms.  I want Nicki Minaj and M.I.A with the pompoms and Madonna being their queen!  And I’m tired of hearing people complain that I’m being catty and that she’s a strong woman and that I should support and not tear down and that just because a woman is in her 50s doesn’t mean she has to just go away.  What I’m saying is that I don’t want to see 50-year-old Madonna doing the same shit 30-year-old Madonna was doing. She is better than that!  Understand that the parking for the Superbowl was running at over three hundred dollars. THREE HUNDRED DOLLARS for parking!! The average ticket price was $1900!  Sorry but that kind of scratch means you get to be critical.

To me the show was just a little too much, a little too try-hard.  I didn’t think it was terrible by any means, but Madonna didn’t look like she was having a great time and I want to watch someone who’s really enjoying what they’re doing.  And I expected more. And I think we're allowed to expect more from Madonna dammit.

And the whole ‘World Peace’ thing at the end. Whatever.

So tell me—agree or disagree? And watch it below in case you missed it.