Can She Rehabilitate Her Image And Win Over The 'Mom' Market? 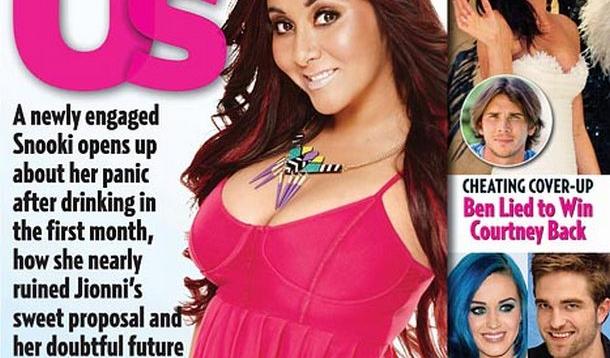 So today Snooki finally confirmed what had been rumoured for many weeks—that she was indeed pregnant with her first child.  And even though the rumours have been pretty rampant it’s still had to believe that the hard-partying reality star is actually knocked up.  But the big question now is will she be able to re-market herself to the ‘Mom’ audience.

Let’s face it—for the past few years Snooki has basically been the poster child for reckless living.  Drinking to excess nightly, having casual sex, assuming zero responsibility even at her job. I mean, not really the kind of girl who you would picture ready to settle down and become a mother. But that’s exactly what has happened with Snooki confirming her pregnancy on the cover of Us Weekly.

So now what? Clearly this pregnancy was a surprise. Snooki so much as said so in the interview when she spoke about how drunk she got on New Year’s and then realizing she was pregnant at the time. No big deal really—I was 8-weeks pregnant with my 4th before I realized it.  But Snooki is also filming a spin-off to Jersey Shore—the show that made her famous—called Snooki and JWoww Vs. The World in which one would assume we would get to follow the drunken exploits of Snooki and JWoww and JWoww’s boobs.  So what will become of this show?  I can’t assume the producers are too thrilled with this recent turn of events.  And what will become of Snooki?

I think it’s safe to say that Snooki is desperately going to try to appeal to the mom market now. You know, for those of you who desperately want leopard print onesies with ‘juicehead gorilla’ printed on them and baby safe spray tan.  Fortunately I think I know the mom market pretty well, and I have a hard believing that she’ll be able to transform from party girl poster child to mom of the year poster child, thanks in part to the fact that on any given Thursday night you can tune into Jersey Shore and watch her either falling-down drunk, urinating outside, chain smoking or hitting up the tanning booth.  Not exactly the type of image even the best marketer can sell to the mommy crowd.

My advice to Snooki would be to take the money now, while she can get it.  Sell the baby pictures for whatever she can get for them and be thankful that her fiancé looks like he’s actually interested in working a real job instead of capitalizing on her 15 minutes of fame.  Deena will probably take her place in the reality show with JWoww, and Snooki can go on with her business of being a mother.  She can try to rehabilitate her image, but I have a feeling that there will be a new reality starlet on the block by the time that can happen.  After all, there was a time when Heidi and Spencer from The Hills covered every single entertainment magazine week after week.  Remember them?  Yeah, me neither.