How To Tell Your Ex-Husband That You’re Pregnant

Getting The Stress-Free Truth Out There 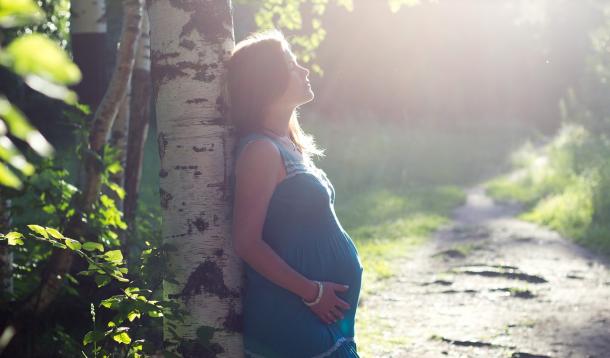 Telling the world you’re pregnant can be terrifying enough, but telling your ex-husband can be downright awkward.

When Cap and I found out we were pregnant, I was nervous I was going to lose the baby in the first trimester, and decided right off the bat to delay telling family and friends for as long as possible. I figured if I could get to 14 weeks and overcome my multiple losses, I’d tell my daughter, my parents, and Ex-hubs. Close friends would have to find out either by phone, if I could reach them after that point, or when I went public with the rest of the world when I felt safe doing that.

This seemed like a solid plan, given that I was preoccupied with crossing into second trimester safely. After much reassurance (read: a lot of therapy), I decided to tell Vee at 14 weeks, only to realize that Ex-Hubs had to be next in line in case our charming 4-year-old extrovert decided to tell the world before I did.

Ex-Hubs and I had found a great footing as co-parents, co-pilots of a small business, and as good friends. We never stopped being respectful, fair, and encouraging to each other, and had continued to be open and transparent about our lives after the split. We never pry, but also never hide anything, and staying that open has really helped us be better parents for Baby Girl. I wanted to tell him, but . . .

“Hey Ex-Hubs, let me know when you’re around so we can have a quick chat.”

That sounds casual enough, right? Wait. I never say "chat." Do I? Does that sound weird? I erased the text and my fingers backtracked to fumble for the phone number of a close friend only to get her voicemail.

“Hey, it’s me. Um, so I’m telling Ex-hubs that I’m pregnant and I’m freaking—oh! I didn’t tell you yet. Yeah. I’m pregnant. So there’s that. I know. It’s awesome. Um . . . I’m freaking out because what the hell do I say to him and I just realized that we’re not even divorced yet and I’m pregnant and that just feels like I should be on Jerry Springer and what if this really upsets him? I don't want to hurt anyone and we just worked so hard to get through the split and I just want everyone to be happy and, oh my god, these freaking hormones and I—" To continue recording your message press 1. To erase and re-record your message press 2.

The phone was ringing, but I deftly ignored it and it quickly started buzzing text messages at me.

Ok Inokai, just breathe. This is the 21st century, life happens, and you are not scandalous talk show material. So your kid told everyone that you’re pregnant. So you just started the domino cascade of coming out. So what. You got this. Just think it through and take it one step at a time . . .

Talk About Your Concerns

“Let him know that you care about his feelings and that you’re concerned you have some news that might upset him. Be upfront.” I loved my friend’s wise approach, because it instantly took a weight off my chest and let me connect with my ex on a deeper than surface level.

“Remember that this won’t actually affect your relationship that much, as big as the news feels.” If you have kids with your ex, their relationship and schedule will stay the same, and may even get stronger during the first few months that baby is on the scene.

If you have somehow convinced yourself that you’re going to get a negative response from telling your ex, remind yourself not to make assumptions. This is great news, and they may be thrilled for you. If they don’t react supportively, then, well, it might just reinforce the reasons that you’re not together.

Put The Facts Out There

Once you make up your mind to tell them—just tell them. Pregnancy isn’t exactly a temporary condition, and the results are pretty noticeable. Keep it to five words or less, don’t overthink it. Once you say it, there’s no going back and the dialogue is open. Take a deep breath and then take the plunge.

Allow Everyone To Have Their Own Feelings

You are going through a roller coaster of emotions, so allow everyone else their range of feelings too. You might get a response of sheer joy, but you might also get concern, a bit of sadness, perhaps anger. Remember to stay empathetic and give space where it needs to be given.

When I finally told my ex, he was thrilled. We both had shaky, happy, tear-stained voices. We had reached another phase of moving ahead together, on our separate paths. All of a sudden I wasn’t sure why I had been so worried in the first place.

“I'm so happy for you guys. And I know that if it was me telling you, you’d be over the moon for me. Life is pretty incredible.”

Want more awkward conversations about relationships? Read about how to introduce your kids to your new partner and my thoughts about why married couples avoid separated friends.