Getting Pregnant After You Give Up On Fertility

The Best Surprise Of My Life 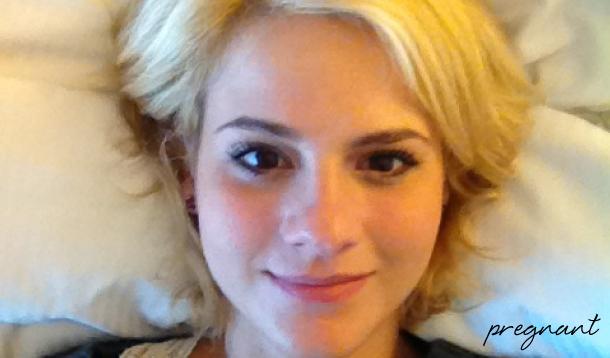 “Hmmm….Your symptoms don’t seem concurrent with your Crohn’s… let’s see what happens over the next couple weeks. It could actually be you adjusting to your new medication… if things are still acting up next month we’ll look at some more tests.”

The last 3 months of 2013 had been peppered with Crohn’s issues, and landed me in the hospital a few times. I’d had some new meds added to my already existing cocktail, and tried to focus on recovery.

Sometime close to Christmas I was having a hard time healing up. I’d lost a ton of weight, my cycle had been tripped up and randomized by steroids, and I felt torn between rest, my 4-year-old, and catching up with my client work. I was also feeling queasy and nauseous and my nerves were frayed.

Around the same time, Cap and I had a breakthrough conversation that gave me a new lease on life. With a lot of positive encouragement, I’d decided to leave my fertility fixation behind, and enjoy my life as it was.

It was easier than I thought.

I remember waking up early one morning with a kind of resolve that plunged me into swift action.

I bundled up all the baby clothes and gave them away.

I cleaned up the dusty baby gear and gave choice pieces to my friends and community day cares.

With a final sigh I packed up my maternity clothes and delivered the bundle to a woman’s shelter.

I thought I’d feel a glaring absence but there wasn’t one. I slowly realized that all of those things — the clothes, the useless gear — those were actually creating the emptiness within me, emphasizing the missing child element, and frankly, driving me nuts.

I felt liberated. As the weeks passed, the innate, loud, buzzing and whirring of my obsession slowly became muffled and then stifled all together. At times I’d stop in my tracks to see if its grating tone was still audible and exhaled in relief when I’d hear nothing.

It was like a spell had worn off. Well, mostly.

I still had an urge to pee on a stick every time my ‘roid-raging cycle decided to be almost 2 weeks off. Every single time I wiggled the pregnancy test out of its wrapper and reread the instructions for the thousandth time. I could have written them out blindfolded by now, but a ritual is a ritual I guess.

“You're nuts. You know you’re not pregnant. Between the Crohn’s and your meds and life in general there’s just no way. Why did you just spend another $20 on this stupid landfill artifact? That’s a nice bottle of Cabernet Sauvignon you just peed on. Just saying.”

Like I had done in October, I took November’s test, turned the telltale box inside out and shoved it in the bottom of the recycling bin.

“I just needed to see the ‘negative.’ God, it’s not like I’m smoking crack or something. It’s the holiday season. I just don’t want to feel guilty or stressed out that if I have a glass of wine I’m potentially pickling my fetus.”

I was still nauseous and out of it after New Years but when my back starting cramping up and I bawled my eyes out during a Lou Ferrigno biography, I chalked everything up to PMS, holiday hangover, my new meds, and pushing myself a little too much.

"Yep. It’s definitely PMS. Because my last period would have been… um… when? Stupid meds."

I whipped out my iPhone calendar and looked at the last marked date — November 24th. It was now January 2nd.

Huh. That seems like a long time. The irrational terror of drowning a zygote in eggnog and bottomless flutes of sparkling brought a flush to my cheeks. “I’m going to the store. To get a test.” Cap was my confessional.

“Ok babe. You know it’s just the steroids still messing with you.” I nodded.

“There’s no way...” We said this in unison with added choruses of ‘JINX!’ and I rolled my eyes happily.

An hour later I was in the bathroom unwrapping yet another test.  Cap was in the living room watching Star Trek Insurrection and nursing a Chinese Food hangover from the night before.

“This was the same cost of a crappy season of an 80s show on iTunes. Or brunch at the diner. Or a cheapie movie ticket. Or a pint of Guinness…” I chastised myself as I peed on the stick with a sigh.

I just needed to see the ‘no’ again. Then I could join Cap and the crew of the Enterprise and maybe start to make plans to go to Cuba or Mexico in the next couple months.

“Mmmm. Sun. Relaxation. Margaritas. Pregnant.” I looked down at the test dismissively and my eyes caught on the word again.

I felt the blood drain from my face and the world seemed to teeter. I grabbed at a towel and ended up sitting on the tile with my pants around my ankles. I sat there for a few minutes.

I looked at the test again like it was some kind of oracle that was about to speak. Without wanting to put it down, I somehow wriggled back into my pants and was about to burst out the door when I stopped short.

"What if this goes wrong too? Should I wait to tell Cap? What if I lose this baby and then… I don’t want him going through that… Should I wait like, another month before I tell him? Wait. That’s nuts, right?"

I slowly walked into the living room and sat down next to my amazing and unsuspecting Cap. I looked at our sweet dog, at the litter of toys under our tree and the clusters of little girl mess around the room. Patrick Stewart seemed to wink at me. Cap pulled me in close.

“I’m pregnant.” I said way more casually than I meant to. It was the first time I’d said it out loud.

“You’re WHAT?” The elation, shock and joy on his face sparked tears in both our eyes. We held each other tight and cried and laughed, unwilling to move beyond the unearthly thrill of the best surprise ever. 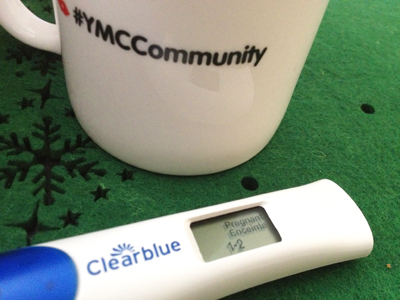 Divorced and dating? Here's how to introduce your child to your new partner. Wondering if your fertility is turning into an obsession? Read this.