When Is Taking A Nude Photo A Terrible Idea?

Hint: When it doesn't belong to you! 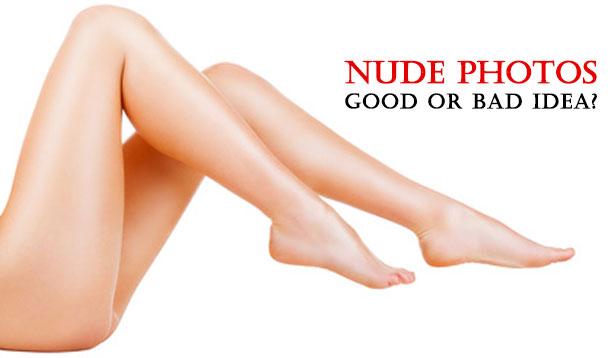 And the exploitation of people’s bodies and personal property continues. Lately the celebrity buzz is all about the personal photos of nude celebrities—most notably Jennifer Lawrence—that were stolen and spread across the Internet like wildfire.

And if invading someone’s privacy and violating their consent weren’t icky enough, it seems an L.A.-based <sarcasmfont>artist</sarcasmfont> has decided to use the photos as part of an art exhibit that will supposedly “call attention to the fact that our information should be our own and it’s not.”

There really needs to be a <disgustedfont> as well.

This artist and the levels of not getting it are maddening. Still I’m going to attempt to state my case without my head exploding.

“Art” is not an excuse for shitty behaviour. If you want to make creative commentary on how our information is vulnerable, here’s a thought: DO IT WITH YOUR OWN IMAGES! Because it’s actually really easy to figure out when information is our own. If I take a photo of myself, it's mine. If I don't agree to share it with you, it's not yours. If you take it something that is mine and not yours, that is called stealing.

I know some people are of the opinion that maybe J.Law and the other women who were violated shouldn't be so het up over all of this. After all, taking a naked picture is a vulnerable act and a phone is a vulnerable device. Not to mention that sexual images of celebrities are big business. I don’t know how often A-listers dabble in statistics, but presumably they knew the chances of their photos being found were more than zero. They knew taking those photos was risky, so they can't be too upset now that the worst has happened, right?

But here’s the thing. Taking a risk doesn’t mean you deserve what happens when the odds don’t fall in your favour. At least that's usually the attitude...except when it comes to sex.

Most of us are aware that driving is risky. There are lots of variables beyond our control—the weather, mechanical issues, other drivers—yet many of us still choose to drive, even when there are other less risky transportation options available. We take a risk. Hopefully all goes well, but sometimes people are unlucky and wind up in an accident. And when accidents do happen, we usually respond with a great deal of sympathy. And if the accident was caused by another driver, that sympathy typically comes with a big side helping of outrage towards the driver at fault. I don’t think I have ever heard someone say, “Yes, it does suck that you got rear-ended, but you chose to a have car and you chose to drive it...you knew the risks when got on the road.”

But when people take sexual risks, the response is often very different. Whether it’s stigma around sexually transmitted illness, or slut-shaming, or suggesting public exposure is the inevitable consequence for snapping a sexual photo, we often have an alarming lack of sympathy when something harmful happens to someone because of sex. I think it's partly because deep down in the roots of our society there’s still this idea that sex is inherently bad and dangerous. Driving a car isn’t wrong. But enjoying your own body, having fun with your sexual image, taking explicit photos of yourself? We sometimes treat that as though it's not allowed, therefore people just have to suck it up and deal with the consequences.

Except it actually is allowed. People are allowed to take whatever pictures of themselves they want. They are allowed to choose who may or may not see them. They are allowed to cry foul when that choice is taken away from them. We all take risks. In doing so, we all have moments of vulnerability. Being vulnerable isn’t wrong—taking deliberate advantage of that vulnerability is. What that hacker did with these photos is wrong. Now someone else is capitalizing on that violation and calling it an art show. It’s gross.

As for the victims of this crime, I’m just sorry. These people took pictures with their phones. It’s something lots of us do. Yes these were naked pictures, but I don’t think it gives anyone less of the same right to privacy and agency we expect when it comes to photos of our children, our vacations, or any other part of lives. Whether this outcome was predictable or not, these women have my unqualified sympathy.

Speaking of sex, find out (almost) everything you want to know about multiple orgasm, and the yays and nays of having sex when you're menstruating.

Nadine Thornhill: Mummy Sex Naked Yoga: Get Calm, Get Centred, And Get Undressed!