How My Dad Helped Me Learn About Sex, Love, And Life 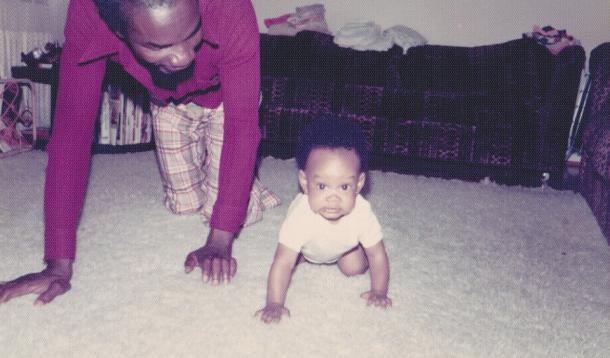 Parents ask me a lot of questions about how they can talk to their children about sex.

But every once in awhile, someone wants to know what my parents told me about sex. Did they provide a model of open communication and comprehensive information? Or is my choice of career the ultimate rebellion against a highly restrictive sexual upbringing?

Growing up, my mom was honest and pretty forthcoming. Sex wasn’t a regular topic of conversation, but when I was three and wanted to know where babies came from, she gave me an honest answer. When my period came, she made sure I was equipped with an adequate supply of maxi pads and knowledge. And when I hit puberty, she gave me her copy of Our Bodies, Ourselves.

My dad and I didn’t talk about sex very at all. Which was kind of weird, because I was very much my father’s girl. As far back as I could remember, people told me that I looked, thought, and behaved just like him. We were extremely close. When I was a kid, we spent every moment we could together, making pancakes, reading stories. We played with model trains and washed the car together. But my very favourite were Saturdays. Dad and I would take the bus into the city.  We would eat at grown-up restaurants and Dad would listen attentively to my little kid thoughts on grown-up subjects. My dad understood that children’s interest in things like politics, art and culture develop over time. Rather than shielding me, he encouraged my interest in the adult world around me. But the one thing my dad was never comfortable discussing was sex, so he rarely brought it up.

In fact, the first time I remember talking to my dad about sex was when I was fifteen. It didn’t start off all that well. Over the summer, I’d gone on vacation with a girlfriend. Because I was all teenager-y and traveling sans chaperone, I decided it would be wise to buy myself some condoms. A week or so after my return, dad found them in my room.

“Nadine, get in here!” he ordered. I walked into the room and saw him holding my slightly bent box of international prophylactics and my heart jumped.

“Are you having sex?” Dad demanded. Suddenly, I was enraged. Who did he think he was? I rarely ever spoke back to my father, but in this case I shouted at him

“That none of your business! And even if I was, you should be glad I’m using protection!”

There was more yelling, followed by indignant teenage stair stomping and door slamming. I retreated to the basement, where I spent a good hour raging and sobbing. I’d done nothing wrong! Nothing! How could my beloved Dad, my always-ally, my kindred spirit, have questioned me like I was a criminal?

Eventually, Dad came down and sat next to me on the couch. He began talking and I realized that my normally composed father, was nervous. He sounded awkward as he explained that sex was not just physical, but emotional. “You need to be ready for it,” he told me. Then I admitted — just as awkwardly, that I hadn’t had sex, that I didn’t feel ready for it yet. But I was getting older, so that might change, maybe someday soon. “I don’t know when I’m going to be ready to have sex. I just thought it was better to get condoms and then that way I know I have them, when I am.”

Moving forward, my dad still wasn’t super-keen on talking about sex. But he was supportive of my budding interest in doing just that. A few months after the condom incident, I did a biology report on artificial insemination. Dad let me take an afternoon of school and drove me downtown to visit a real life sperm bank. He didn’t come in with me, but we met for dinner after. He only looked slightly ill, while I enthusiastically described the process of sperm extraction over pizza.

In my last year of high school, I decided to make a PSA on safer sex for my social studies class.

“You told me I shouldn’t be afraid of saying things just because people might not like it,” I reminded him. I guess that was the right response, because after that, Dad let me have free access to his beloved Sony camcorder.

Under normal circumstances, Dad would have rather died than set foot in a sex shop but when I started working at one he pushed past his discomfort and graciously accepted my invitation to come in for a visit.

When I began my career as a sexuality blogger, he proudly told his friends about his daughter who wrote “an online column about intimate things.”

Over the years, he began to ask me about topics we’d never spoken of like friends with benefits, gender diversity, non-mongamy and more. He would listen attentively to my thoughts on sexuality...and occasionally he would share some of his own.

When I announced my plans to head out to California to start my doctorate in Human Sexuality, the first thing Dad said was,  “I think that’s a fantastic plan. I know you’re going to do incredibly well.”  In the weeks leading up to my departure, we had visits and spoke on the phone. He wanted to know every detail of my plans for school and my time away. I told him that I’d be renting a house with a spare room, so he could come visit.

“Hmmm...maybe. It’s far and I’m getting older,” was his response. I knew he letting me down gently, that he felt overwhelmed by the prospect of a trip to a place he’d never been before. I was sad. I would be gone for a year. It would be the longest I’d ever been apart from Dad. I knew he was very sad too and part of him was wishing I wasn’t leaving. But he would have never, ever said so. Dad would have never let his feelings interfere with what he thought I wanted. I knew that more than anything, he wanted me to be happy — even if that meant traveling 3000 miles away to learn more about sex — he would wish me well and cheer me on because that’s the kind of dad he was.

I left. But Dad and I kept in touch through phone calls and Skype. He always asked about the new things I was seeing and doing in California. And he always wanted to hear about what new things I’d learned in school. “This whole sex thing is really fascinating,” he exclaimed during one of our Skype sessions.

My year away was wonderful, but as the time approached for us to return this summer, I began counting down the days knowing that come July I’d be reunited with my dad. I couldn’t wait to see him, to hug him. I was going to take him out to lunch, so we could talk about grown-up things like politics, art, culture and maybe even sex....

Sadly, as some of you know, our reunion was not the one I had hoped for. I returned to Canada to find my dad in the hospital. He had developed cancer and it had taken a sudden, severe toll on his health. He was lying in bed, looking frail and weak but as soon as he saw me, he smiled. He turned to his nurse and “That’s my daughter — she goes to school in California!” His voice was weak, but filled with pride.

I sat beside him on the bed. We held hands for awhile, but didn’t speak. There was no need. My dad would’ve hated any kind of mushy-feely bedside talk. I know that, because I know him. I have always been my father’s girl.

The following afternoon, my dad died.

I miss my dad tremendously. His death is recent and my grief still feels pretty fresh. But I’m also blessed to have had him in my life for as long as I did. He gave me so much and I wanted share one of the many lessons his life and death have taught me. When it came to sex, my dad didn’t always know what to say or what to do. He was awkward. He made mistakes. But he tried his best...because he loved me. And it’s his love I remember and that’s what I will carry with me as I raise and educate my own child.

I want to encourage all of you to talk to the children in your life, about sex, about life, about anything. It doesn’t matter if you don’t know exactly what to say — just let them know you love them enough to try.

Thank you Dad, for everything. I love you. I always will.