BRIDGET JONES: MAD ABOUT THE BOY 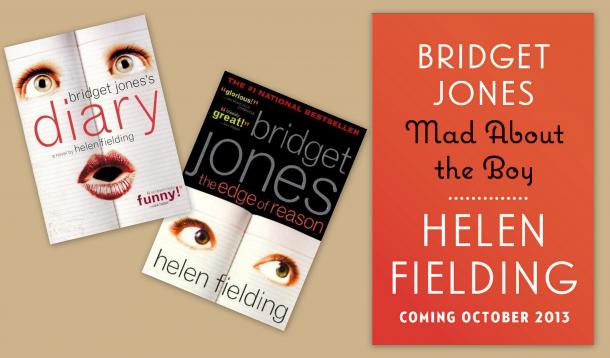 Have you been waiting for what seems like forever for the new Bridget Jones adventure? If you’ve been Jonesing for Bridget then fret no more, because she’s baaaack and BRIDGET JONES is "MAD ABOUT THE BOY"! Read on to find out more.

Helen Fielding — the British writer whose wildly popular newspaper column depicting a 30-something single woman living in London in the 1990s became a worldwide sensation in the guise of Bridget Jones — has written a new novel featuring her iconic protagonist. BRIDGET JONES: MAD ABOUT THE BOY will be published by Knopf Canada on October 15, in print and e-book editions, with a first printing of 50,000 copies.

When asked which boy Bridget was mad about, Fielding merely raised one eyebrow enigmatically.

Fielding’s first book, Bridget Jones's Diary, was an international bestseller and global phenomenon when it was originally published in 1996. It was followed in 1999 by a sequel, Bridget Jones: The Edge of Reason. Together, the novels sold more than 15 million copies and were published in 40 different countries, and both were adapted into blockbuster films starring Renee Zellweger, Hugh Grant, and Colin Firth.

Louise Dennys, Executive Publisher of the Knopf Random Canada Publishing Group, said, "Helen Fielding accomplished something rare and wonderful as a writer — she brought a character into the lives of millions of people who today still smile at the memory of that all-too-human singleton in nineties’ London.  BRIDGET JONES: MAD ABOUT THE BOY is a totally new phase in Bridget’s life, as Helen indicated when she said, ‘Bridget's life has moved on.’ But, the question is, just how much?  Well, here is what we can share: the novel is set in present-day London; Bridget is older; she is still keeping a diary, but she is also immersed in texting and experimenting with social media, with an accent on ‘social.’"

“And how grateful I am to Helen Fielding,” Louise Dennys, added, “for letting us into Bridget’s life again — one of the great comic characters of our times."

Excerpt from BRIDGET JONES: MAD ABOUT THE BOY

You see, this is the trouble with the modern world.  If it was the days of letter-writing, I would never even have started to find his address, a pen, a piece of paper, an envelope, a stamp,  and gone outside at 11.30p.m. to find a postbox. A text is gone at the brush of a fingertip, like a nuclear bomb or exocet missile.

DO NOT TEXT WHEN DRUNK

The book cover image for BRIDGET JONES: MAD ABOUT THE BOY is a ‘holding image.’ The real cover will be revealed in the next couple of months and the book will hit the shelves on October 15, 2013. Watch this blog and follow @RandomHouseCA for future details about all things Bridget Jones!

Press release and excerpt courtesy of Knopf Canada which is a division of Random House of Canada Limited.

Wanda Lynne Young: Bookalicious What Was That Number Again?

Wanda Lynne Young: Bookalicious 6 Books You Need To Add To Your Must-Read List!

Wanda Lynne Young: Bookalicious Just Like You by Darlene Wierski-Devoe