GROWING A RAINBOW By Lesley Donaldson-Reid 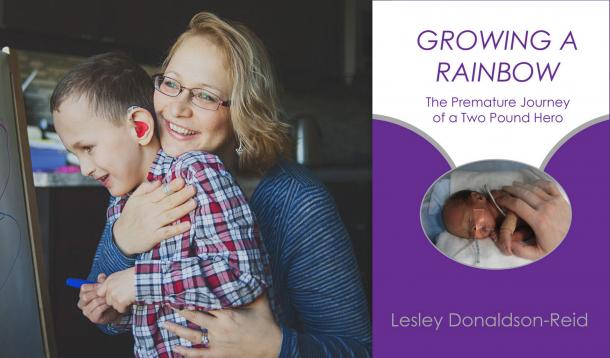 What You Need to Know About Premature Labour

November 17th is World Prematurity Day. Author Lesley Donaldson-Reid has a story and her memoir to share in an effort to urge awareness about this cause and shine a light on the issues in the preemie community. Read Lesley's guest post and a book excerpt to find out more about her family and enter the draw for a chance to win a copy of her book GROWING A RAINBOW: THE PREMATURE JOURNEY OF A TWO POUND HERO.

What You Need to Know About Premature Labour

The Story Born of Heartache Over a Baby Born Too Soon

You won’t believe the strength of the spirit in my son, who weighed less than a pair of running shoes at birth. If it weren’t for my 136 days at his hospital bedside, I might not have believed it either. My son Torran was born before my third trimester. He was a micro-preemie, and endured more in the first six months than some people will their entire lives.

Three years after we left the hospital, a mother from Guelph, ON contacted me. She  had read about Torran on my blog, and had twins who were born premature. She hadn’t even begun to grieve one boy’s death when she faced brain surgery in the other. Like Torran, he had bleeding in his head from his premature birth. He, too, had hydrocephalus, the retention of fluid in his skull.

I knew that my niche blog - the one I wrote to inform friends and family about our daily trauma (so I didn’t have to re-live it by telling them in person) - needed to be more than an outpouring of my random thoughts. Then, last year Erica Ehm spoke at Blissdom Canada and her words of inspiration convinced me to do more with my blog and make it have value to a wider audience.

Canada’s rate of prematurity increased 30% over the last 20 years. It ranks as the 40th lowest rate in the world, where it used to rank 5th lowest. The rate of babies born under 37 weeks gestation in Ontario is 8% of births but the number remains higher in Indigenous populations. Premature infants face increased rates of death and disability than full term infants. The WHO identifies prematurity as the number one fatality among infants, and the second highest cause of death of children under the age of 5.

And, given the choice, I would go through every one of those heartbreaking days again if it meant bringing my son home.

I wrote Growing A Rainbow: The Premature Journey of a Two Pound Hero to give a voice to the preemies who cannot tell their own story. It may not be an easy one to hear, but it’s an even harder one to live. In the NICU, there is so much pain for the babies and their families.  There’s also warmth, humour and, always, unconditional love. I wanted to let other preemie parents know that they aren’t alone. This narrative is also a way for people who have no experience with the NICU to understand the dramatic impact of prematurity.

Sales of the book support the Canadian Premature Babies Foundation. This organization, created Katharina Staub - mother of preemie 27 week old twins -  works with researchers to bring the parent experience into their work of preventing prematurity. CPBF creates a support network among parents in a way that the hospitals cannot, because the babies are the patients, not the parents. The Foundation also works with hospitals to improve standards of care for premature infants and their families.

Please join me - and thousands of families like mine - in raising awareness about prematurity through your purchase of Growing A Rainbow. On Monday November 17th, use the hashtags #WorldPrematurityDay and #PreemiePower on your social media. Share your stories and pictures. Ask questions about the experience in the NICU and about how you can help the tiniest fighters on the planet.

Why Silence Isn't The Answer When Someone Loses A Baby

Twenty minutes later, an unfamiliar doctor meets with us in the parent lounge. He stands in the doorway. From my seat on the couch he seems much larger than his five foot-something height. After his soft and brief handshake, his hands retire to the safety of the pockets in his white lab coat.

“Your son developed a fever overnight. We suspect he has an infection. We tried to call you at home to obtain permission for the lumbar puncture but there was no answer.” My brain chews on the details.

I called during the night when I last pumped. It’s part of my nightly routine. That was about 2:30 a.m. The nurse didn’t report any problems. As always, Torran was “fine.” I hate that word.

Bruce shakes his head, “We’d already left the house so we could be here for morning rounds. Neither of us turned our phones on.”

“We have to assess all potential sources for infections. We sampled you son’s blood already. Premature babies are at risk for meningitis, a brain infection. The lumbar puncture removes some of the fluid that bathes the brain and spinal cord out of the body, which we then test for bacteria. It’s been tough though, because we’re having problems getting the proper sample.

“We insert a needle between the bones of the spine and tap into the fluid between the linings of the spinal cord,” the doctor says. Bruce winces. The doctor hastily completes his update and returns to the baby that won’t cooperate.

I don’t want to imagine my fragile infant held in a fetal position that stretches out the lower part of his spine for the needle access. If they can’t get the needle into his back properly, they’ll keep at it repeatedly.

The thought of my child enduring that torture without me makes me find enough strength to stand up. In three steps I cross the room and look out the window. There is nowhere to go.

Sunshine cannot get into the window, strangled by the buildings that surround us to the outside world. Under that wide blue sky some mother holds her baby, her body rocking like a pulse. I wrap my arms around the empty space on my chest.

An hour passes during which I ignore Bruce’s attempts at keeping me calm.

“You don’t know that, Lesley. The doctor didn’t say anything like that.”

“Are you kidding me? You do know what I do for a living don’t you?” We dance the "Who’s Right Tango" until I tire of talking to him.

Impatiently, I pick up phone in the parent lounge. I want in. The same cheery voice as before answers the phone. I select incitant words.

“I want to see my son before he dies.” Bruce gives me a sharp look, sucking air in through his teeth.

We have a copy of GROWING A RAINBOW to give away to a lucky Bookalicious reader! To enter, all you have to do is leave a comment in the "Click Here To Spill It" bubble below. You have until November 24th, 2014 to enter the BBGG. You must be a YMC member, and please be sure you've registered your email address in our commenting system so we can contact you if you win.

You must be a YummyMummyClub.ca member to win. Click here to sign up. It's free and filled with perks. One comment per member. Entries accepted until November 24th, 2014. Contest open to Canadian residents (excluding Quebec). Winners will be picked using www.random.org. See full contest rules.

Between 12 hour nursing shifts and 24 hour parenting shifts, Lesley redefined herself into an Authorpreneur. Lesley is a special needs parent, a Canadian Registered Nurse, and often companionable wife. Along with her son and husband she enjoys exploring the world and ventures into the past with her medieval re-creation hobby. Lesley shares her life journey on realwomendrivestick.com and presents her next chapter as an author-publisher on writerlesleydonaldson.com. You can follow Lesley on Twitter as @FanofPreemies and @bornagainwriter, and like her Facebook Pages Real Women Drive Stick and Writer Lesley Donaldson. Lesley is a proud member of the YMC Community.

You can read more about preemies in this post about protecting your premature baby and learn tips on how to get through a NICU stay.

Wanda Lynne Young: Bookalicious How Can I Be Your Lover When I'm Too Busy Being Your Mother

Wanda Lynne Young: Bookalicious Breast Cancer: Are You In The High-Risk Category?