That Time I Ended Up Giving Birth With No Epidural. Twice.

A Not So Serious Look at My Unintentionally Natural Births 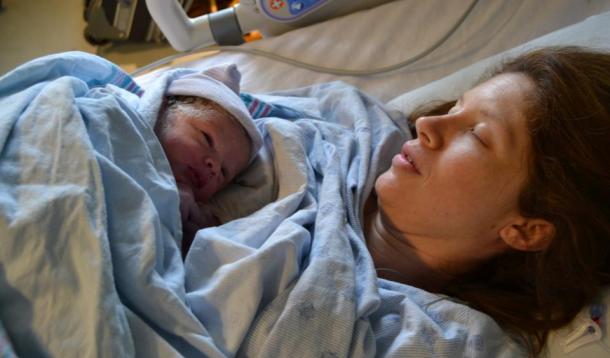 It’s a good thing I don’t keep neat little notebooks with pros and cons lists and other things I imagine people with a birth plan would tackle. Had I kept such a notebook with a birth plan that included Epidural, I’d be one chagrined camper in the spring of 2009 and summer of 2012. This was when I experienced childbirth without Epidural and it was... owie. I know that people with a plan sometimes struggle greatly when it falls apart. The notion of having invested time and effort into coming up with a perfect, tailor-made solution only to have it derailed by circumstances can be frustrating (welcome to parenting). While I didn’t commit to Epidural, I also did not commit to not getting it. It wasn’t as if I was all “birth with no Epidural? TWICE? Don’t mind if I do!”

So how did I end up in this predicament?

Don’t let my Zen go-with-the-flow attitude fool you. I came in as well-prepared in theory for my first childbirth experience as a virgin approaching sex. I took a prenatal class and knew exactly what to do if I felt like giving birth on all fours or launching my child into the world from a Yoga ball. I read “What to Expect When You’re Expecting” but I also knew to expect the unexpected. It was only at the hospital as I was having my contractions that I started realizing just how broad of a category “the unexpected” was. A thing I was just learning, for example, was that when I’m having contractions it hurts when people talk and mirror my feelings in a re-affirmative way (“I can sense that you’re in a lot of pain”) and that it doesn’t help to be touched - sorry mom and hubby. I learned that my manners while contracting remain intact. You would never be able to tell how low on my priorities list was prepping the next generation of obstetricians from the way I was apologizing as I was contracting and helping a medical student with her homework.

I can’t remember at what point I asked for Epidural but there was relief even just in the act of asking. What I didn’t know was that I wouldn’t be getting the coveted injection. I was experiencing a complication and in the blink of an eye things got very ER (as in the TV show that made George Clooney the famous social activist he is today). As I was being rolled to the OR while being confronted with some highly concerning facts (I had a placental abruption and my baby’s heart rate was dropping) and some reassuring ones (there were things that I could do to help him: push) I was learning what an out-of-body experience felt like. I detached myself from the situation and became a bystander -  a bystander who was about to PUSH like they were the first pusher to ever push and teach the rest of the world how it’s done.

My out-of-body experience was interrupted only by a strangely assertive doctor who demanded that I — as in the transcendental being who is having contractions and complications — take off my wardrobe choice of pink gown stat. Like YESTERDAY. Seeing that this is probably the only time in your life when a command like that is acceptable, I did it, but not without resenting the tone. What else could I do for you, Sir? Would you also maybe like me to remain totally naked and cover pretty much nothing but my mid section with a cocktail napkin size towel ? He actually did. So once again I did it. Where was my feelings barometer mom now? (“you must be feeling very exposed”). I did push like those guys who chain themselves to idle cars and drag them across the street for entertainment value and my baby (turning seven years old next month) was out in twenty minutes. My pushing skills and ability to get him out before things went from bad to worse received the appropriate recognition from the medical staff, which nicely balanced off the awkward vibe I got from the towel incident and I’ve clearly put this behind me and don’t even remember it anymore. Not getting Epidural turned out to be a good thing, as it might have interfered with my pushing, but I can’t say I didn’t wonder. Epidural became the one who got away. What would it have been like? We could have been so good together.

Fast forward to 2012 and my next chance to get that question resolved. I may have been more Epidural-curious this time around. The contractions were even more painful as a result of hours of not going into labour and eventually deciding to be induced with Oxytocin. I don’t remember the specifics, but the dialogue as I was contracting may have sounded something like this:

This birth came and went with no special complications, unless you consider a seasoned nurse, who mistakes your labour signs for something else, non-laboury, a complication. If I thought that talking while contracting with no Oxytocin in my system was hard, then I was in for an eye opener. The birthing nurse kept instructing me to roll from side to side and attempt other positions more suited for pretty much anyone with muscles and a spine who isn’t actively going into labour. I did manage to get an Epidural injection this time, but there was one catch. It was doing nothing for me. As I was busy following the nurse’s instructions reflecting her interpretation of what was happening to me and her vision of what should be, she was having a professional disagreement with the doctor who administered my injection. Moments later she handed me my younger son with the same pizzazz and determination with which she argued my non-labour pretty much until the moment a head emerged, slightly hitting same head on a piece of medical equipment. The Epidural kicked in just in time for me to feel numb and light headed as I was being moved to the recovery room after giving birth.

Sometimes people who generally don’t plan can be a bit fatalistic and believe that things happen exactly the way they should.

Maybe Epidural and I just weren’t meant to be.