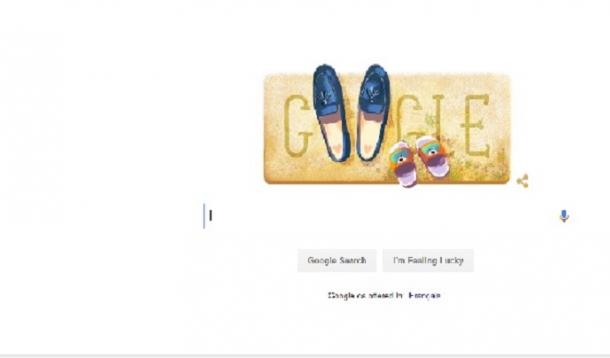 My seven year-old recently asked me the following question:

Google Doodle usually represents the outside the box non-conformist thinking I would expect of a company that prides itself on innovation and originality (see this wonderful tribute to Beethoven that my kids still remember months later). Sunday’s Mother’s Day Doodle, however, was a different story and it left me feeling slightly WTFish. The image selected to represent Mother's Day shows a pair of antiquated shoes on a doormat. Next to them is a pair of children’s shoes - shedding light on the identity of the owner of the larger size ones and the vibe I'm getting from these sturdy post WWII babies is very 1950s.

So what’s up with that, Google Doodle?!

I imagine Google Doodlists brainstorming atop their skateboards as they go up and down ramps tossing ideas at each other. Could no one offer a more creative one than “mom = home = doormat + misery in size 14”?

I understand the roadblocks that creative professionals face these days. Being creative in a restricting environment where everyone's sensitivities need to be taken into consideration is no easy task. When I think of images that represent my own mother delicious dishes float up in the air and form a mouth-watering cloud over my head. I see symbols representing style and fancy-ness – red lipsticks, a copper coloured 80s jacket, flower clip-ons. I realize that for obvious reasons none of these would sit well with the public. A mother is not the functions she performs. She is not your personal chef. A woman doesn't equal the clothes that she wears, yet Google did select a fashion accessory to represent mothers. Did they knowingly de-feminize it so as to avoid criticism for making a shallow statement associating mothers with fancy shoes? Is the statement that they’re unintentionally making any less shallow?

I continue walking the minefield of charged images in search of a suitable one to represent motherhood and I turn once again to my source, my mother. There’s more to my mom than good cooking and an impeccable sense of style. My mom is an avid book reader and a fluent speaker of three languages. She is a classical music connoisseur. She is hardworking, smart and the funniest woman I know. None of those personal traits would translate into the type of universal message that Google Doodle was looking for.

But what about this one – my mom is my safety net, my safe place, and I’m pretty sure that so is yours for you, Google Doodlist. I appreciate the implied “home is where your mom is” message – assuming that your home transcends the realm of pure visual representation and is used here as a metaphor for a safe place -- but was there truly no other way of representing the bond formed between a mother and her child on their territory, their natural habitat other than via doormat and a pair of depressing joie de vivre sucker shoes?

Excuse my while I brainstorm here for a second.

Now what stands for safety, security and comfort? A mother’s wing? A protective wing over a baby bird. Or what about a statue? A big giant statue like the Greek colossus, only it’s a mother – maybe wearing a two piece suit and holding a purse in one hand, the other is defiantly resting on her waist in a challenging gesture. Or she might be wearing yoga pants - today's equivalent of an apron - chin tilted up as she faces whatever under-the-bed-monster tormenting her child and tells it off, as moms do. How about a pregnant belly? I could see how the graphic would curve itself nicely around Google Doodle’s letter “O”. Would that be too sentimental?

Mother's Day Google Doodles from previous years show a bit more imagination than this year's image. A mother on a bike with a cape flapping in the wind, and yes somebody had already thought of the protective wing of a mama swan.  There's even some sort of a futuristic robot hand that waters plants as it feeds and crafts and DIYs and nourishes. I'm thinking of an octopus. What about an octopus, the embodiment of a multitasker for this year’s image?

Who was it that came up with a doormat and archaic shoes and how come everyone else agreed? If you’re going to argue that there's always going to be someone who will disagree and get offended, I’m the first one to concur. I think that we should stop being so sensitive and take ourselves a bit less seriously. I’m not offended by the image, I just think it lacks the fundamental principles that define motherhood to me. I would accept a humorous, cartoonish image of a mom – frazzled, overwhelmed, confused as long as the underlying sentiment conveyed - forget respect, just SOME sort of an emotion. While I don’t think that this image is deliberately offensive (although I think there are other ways of equating mothers with the comfort of a home, bypassing the doormat image) I feel that it reflects none of the warmth we expect when we think about our moms.

This post was inspired by a tweet from Avital Nathman the editor of The Good Mother Myth.