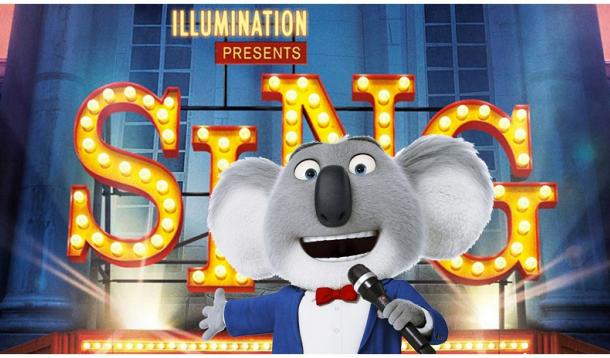 Everyone knows that when the going gets tough, the tough get going, but what happens when the going hits the galactic fan and then gets all surreal with a shade of apocalypse on you? Where's my copy of “This is Not a Drill – Your Guide to Surviving 2016”?

To put the bottom line first, Sing is the collective therapy we all deserve for enduring last year. To take this one step further, Sing is also the children’s movie that we, parents, deserve after years of suffering through horror flicks marketed as G-rated. Is there a small claims court that will compensate me for three years of hyperventilation as I watch an unsuspecting parade of wide-eyed child/pet protagonists being swallowed by tsunami-type waves on a big screen with my children sitting next to me? Thanks to pediatric cinema, I’m no stranger to the practice of mindfully sitting there with my guilt and just allowing it to be. But really?

Maybe it was the universe’s plan all along, forging a generation of 2016-ready emotional Spartans, or perhaps it’s the continuation of a longstanding tradition of cautionary tales, but sitting with my kids through endless examples of natural and emotional disasters befalling other children and pets is not as fun as society and check-us-out-we’re-at-the-movies selfies will have you believe.

Sing says NO to this bullshit

Sing stays committed to its premise – a movie about a song contest and the story of overcoming obstacles, be they self-imposed or external. A struggling theater impresario, a koala by the name of Mr. Moon, comes up with an idea that will revitalize his career. His main commitment, though, is to the theater itself, a building he inherited from his father, and which is treated throughout the movie as another living creature. The movie is interlaced with great music and while it definitely offers its share of drama, none of it is artificially manufactured drama that doesn’t stem directly from the plot (see car chase scene in The Secret Life of Pets also known as #whut vs. the one in Sing). Sing has no must-have, exhausting comical villains who are “funny” based on the sole premise that being the very embodiment of a contradiction, like Snowball the fluffy white bunny from The Secret Life of Pets, is inherently funny (yes, I’ve got a lot of beef with TSLOP, might as well abbreviate it). As opposed to The Good Dinosaur, Hotel Transylvania and countless other films Sing doesn’t seem to subscribe to the notion that near-death situations are a kids’ movie staple.

Hello, we’re parents, hear us yawn. We’re tired. We watch artificially manufactured drama and for-entertainment-value-near-death situations all day every day. Why trigger us?

No, YOU spent the entire movie identifying with Rosita the-pig-mother-of-twenty-five-feels-unheard.

But even if we set you aside for a minute, there are so many other things that delightfully real about this movie and make great learning moments. Just like in real life there are no purely good or bad characters in the movie. The mostly good protagonist, Mr. Moon, is also shown as flawed. He is motivated by a positive goal but when the going gets tough at one point he gives up and allows himself to walk out on those who depend on him. There is no villain in this movie. Mike, the shady street musician mouse who joins the contest, comes closest, but he too is shown as complex, burdened with weaknesses that make him act out but toward the end of the movie he reveals his ability to admire and appreciate talent when he sees it in others.

Sing is a feel good movie when we most need it

As you’ve figured by now, the movie is the antidote to suckiness. When my husband suggested taking the kids to the movies over the holidays, I was resentful; not gonna lie. Still carrying a grudge over the car chase scene in TSLOP and other ways that kids movies always seem to sucker punch me. I knew nothing of the movie nor did I want to know. That ended up working great for me. There’s an innocence to the plot due to the lack of unnecessary noise (drama, near death etc.) Eliminating your own distracting inner noise (“Hmm, wonder which one is Reese Witherspoon?”) allows you to concentrate on the story, the feelings it evokes, YOUR story (because you felt like Rosita). Do yourself a favour and eliminate self-imposed distractions and don’t check the cast until after the movie.

Now got watch the movie and don’t forget to post a selfie.

RELATED: 15 Things That Could Go Wrong When You Visit a Public Restroom with Kids