Do You Cringe When Your Chatterbox Child Goes On and On? 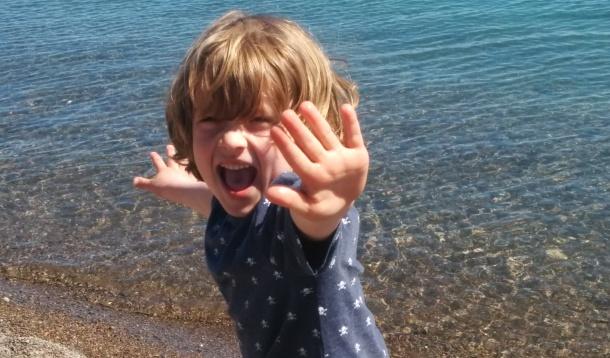 Something unusual happened on our drive back from our weekend away. I could hear myself thinking “how come it’s so quiet in here?” It wasn’t a pregnant kind of silence either, one that precedes a fierce “WHY IS THIS TAKING SO LONG?” toddler tantrum or a toy fishing rod poke in the driver’s eye. No, it was a much eerier, unchartered territory of the real deal, Dead Silence, something that parents don’t get to experience very often.

Especially not parents of chatty kids.

I couldn’t help but think of the sharp contrast to our ride there when my six year-old hardly paused for two hours, and I smiled the kind of smile that is born out of familiarity. My son loves to talk, and while we often discuss safety rules and stranger danger scenarios, the fact remains that by nature he is equally comfortable chatting with children and grownups he knows as he is with children and grownups he doesn’t.

This has always been a source of marvel for me. I find it incredibly difficult to initiate a conversation with someone I don't know well– something my son does with the same effortlessness he blinks. Watching him approach, engage, surprise and charm often fills me with the sense of awe that one might experience watching their child practice a form of sport they could never master. At times, however, it fills me with concern.

If I rush him and navigate parts of the conversation for him, I put myself up as a barrier between my child and the world that he so eagerly seeks to explore. I wish I could say that I do it simply as a means of protection against potentially impatient “listeners,” but that is only one part of the equation. I have a crippling fear of imposing — which I am, and in turn, superimposing on my child (the irony, once again, is not lost on me).

No matter how interesting his thoughts are to me, or how entertaining the thought process, or how surprising the subject matter and how impressive his rich vocabulary is, not everyone is seeking unsolicited conversation on their way to the grocery store or while walking their dog. As I sense the conversation moving past the socially accepted cues for “okay, bye now” — often lost on a six year-old child — I start cringing, rushing, navigating.

Am I, by doing so, inflicting upon my son the same reaction I fear he would encounter from impatient strangers?

Most of my son’s selected conversation partners reciprocate by responding, listening or at least acknowledging him. It is extremely rare that he is ignored. Perhaps the problem is not so much the chatty son but more so the overly protective mother? Am I writing about an imagined issue?

Then something surfaces that I didn't wish to remember. I recall once reading a humorous blog post written by a mother who was recounting her experience on the playground and referring to a “freakishly chatty child” who tried to engage her in conversation. I appreciated the humour, but nevertheless I read this with the sinking feeling experienced by a parent who’s confronted with proof that “not everyone will adore your child” is not an urban legend after all. It hit too close to home.

My son is chatty, and not everyone is going to be excited to talk to him, and I need to stop worrying about it.

The thing about this chatty kid is that he is still — at six — genuinely interested in what his conversation partner thinks. He doesn’t just talk because he wants to talk, he also does it because he wants YOU to. He is curious and wants to listen and learn from your answers. He is still — at six — looking for rules and patterns. Something that governs our reality and introduces clarity.

You, the older child or grownup, are wise in the ways of the world in his eyes and he wants you to share your experiences. He asks questions to try and construct that mental replica of the world that he is so painstakingly building. He is still sometimes — at six years of age — so excited he just can't hide it and still unencumbered by the kind of self-consciousness that would prevent him from sharing it with you.

Your time is important. You don’t have to stop, listen, and put your plans on hold just to hear him out. He could talk for two hours straight, believe me. But please don’t think of him as a “freakishly chatty kid” or a nuisance.

He doesn’t deserve that.

RELATED: 5 Important Lessons I Learned From My Moms Group