The Surprising Connection Between Dads & Why They Raise Kids Differently 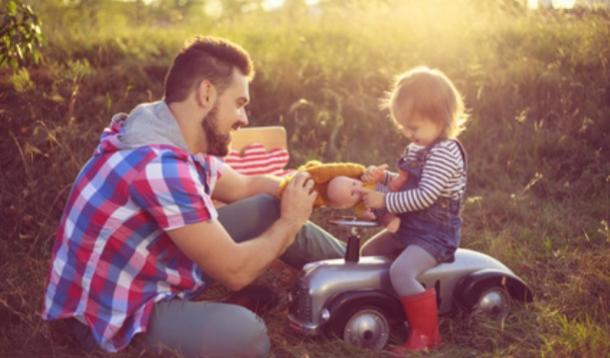 One of the hottest topics amongst parents right now is the idea of "gendered parenting" or gender stereotyping. The question many parents grapple with is how to raise boys and girls to believe, from a young age, that they can be and do whatever they want; today and tomorrow. In order for this to happen, parents are now challenging outdated traditions associated with raising kids: pink is for girls, blue is for boys; dolls are for girls, trucks are for boys; dance is for girls, sport is for boys.

We’re doing a lot of talking about gender, but are we actually raising our children differently?  According to a recent YMC survey sent out to Canadian parents about gender boundaries, it is quite clear (and not surprising) that the next generation of men and women are more open-minded about gender roles and sexuality than previous generations.

I have no issues with my children doing anything that 'society' sees as not gender neutral. My son is 3.5, and loves to wear his sister's princess shoes - they are purple :)  Whatever they are doing is fine with me, and their dad. We love our children no matter what!

As part of the survey, we asked dads to rate themselves on a masculine/feminine scale. Younger dads tended to self-describe as less masculine than older men and were more involved in domestic duties. The surprising insight for me wasn’t the evolution of fatherhood, but rather the accompanying trickle down effect of dads’ influence on how their sons and daughter are being raised.

My partner frequently reinforces traditional gender stereotypes in both his words and actions. I am far more easygoing, yet many of my preferred activities are more often associated with female stereotypes. I try to encourage open-mindedness in my daughters.

It comes as no surprise that our survey confirms that moms are still the main decision makers when it comes to choosing activities for both sons and daughters. However, when it comes to boys, our numbers are pointing to the reality that dads today have become significantly more involved in the decision-making process than previous generations.

Their dad did buy his son a new run bike in orange despite the fact he already had his sister's hand me down pink bike which he clearly doesn't mind (age 2), and I didn't either. Dad is more strict about his son following a more "normal" gender role whereas he's more easy going with his daughter.

While they are increasingly comfortable aligning themselves with “feminine” values, our survey shows that fathers are more likely than moms to skew traditional in terms of activities and hobbies.

According to our survey, dads are more involved in overseeing their sons’ sports and hobbies than daughters and are more prescriptive in the kinds of gendered activities they allow his little guys to participate in. Hockey, yes. Putting on nail polish, no.

My husband might unintentionally discourage in subtle ways, whereas I would openly discuss and state my unconditional support for whatever feels natural and best to my kids re traditionally gendered toys, clothes, activities, etc.

My husband prefers our boys to act like boys, but I think it's cute when the boys will play girl games with their sister. I don't believe their choices now will determine their gender identification.

My spouse will direct my son to more masculine choices when he's opting for something feminine.  It results in my son being disappointed and me being upset.

On the other hand, there seems to be unanimous agreement from both parents that girls can be and do anything – including sports once typically associated with boys. In many ways, it’s become a girl’s world. Things are evolving more slowly for our boys.

My daughter really wanted to join Karate and another kid (boy) told her she couldn't because she was a girl. I signed her up the following week. I told her that day it doesn't matter what she wants to do, she can be a mechanic if she wants. Gender should never play a role in our dreams, jobs, sports, or fun.

My husband didn't want my son to play with a play kitchen at his school.  He said that it seemed like a feminine toy because it involved cooking.

Especially in families with younger parents, dance, and figure skating are on the decline for girls, while “tougher” sports like hockey and soccer are on the rise.  On the other side of the gender spectrum, boys still aren’t participating in dance or figure skating. If we’re to believe in our survey’s numbers, we can assume that dads still aren’t comfortable letting their boys "go there."

Protect Our Sons from bullying

So who — or what — do parents believe is responsible for influencing our kids gender identity and sexuality? According to our survey, most younger parents point to the media and brand advertising as a having huge effect on their kids.

We try to steer them away from media (movies, TV, books) that reinforce gender stereotypes (eg. girl being rescued, boy doing rescuing) but it is VERY difficult to find a variety of media that model gender-neutral or female-positive storylines.

Right now my daughter is becoming highly aware of gendered toy marketing.  We are encouraging her that all toys are for everyone, but she is being influenced by the fact there are no girls on the package.  The campaign only uses the word "boy" etc.

I didn’t find that statistic surprising at all considering the huge number of heated comments from parents when we post any kind of story about products and gender on our YMC properties like this one on gender and career opportunities and this one about LEGO and gender bias. The survey numbers tell us that parents believe that media and brands are the biggest obstacle to letting them raise their kids without gender stereotypes.

Here’s what I find exciting about the survey: Sentiments and behavior are definitely shifting about kids and gender in the parenting space. And that shift is forcing brands to address our concerns. Parents are being more vocal in the social space and  companies are taking note.

I've asked family members to stop buying gender specific toys — for example, a Minnie Mouse vanity with a mirror and stool, for my daughter. I've asked them to think that if they would not buy it for a boy, then do not buy it for her. I've told them that she will get enough of a push from society to be one way and that its our job to show her all of her options not just traditional ones.

It's working: In 2015 Target announced it was removing gender labels from its toys and bedding section after a mom's critical viral post, The Disney Store isn't marketing their Halloween costumes as “girls” or “boys” online and in the U.K., Toys R Us are no longer categorizing toys by gender online. Even Mattel and (Barbie) have been pressured to change.

But here’s an interesting side note: We all know there’s power in speaking out, but ultimately we really vote with our dollars. If the bottom line isn’t affected, companies aren't forced to change their policies. Here’s where the dad piece comes in again. Fathers becoming more involved with raising their kids is having an effect in the retail space. According to our survey, more dads are shopping for their family, and are also more likely than women to buy gendered products. Moms are more aware of pink washed products and stay away from them. So, with more men out there in the mall, retailers may not notice as strong a shift in their bottom line in gender neutral products.

So what's the big learning about the evolution of kids and gender?

We are definitely making progress in transforming stereotypical behavior from our sons and daughters. While there are many ways and strides yet to go for our daughters, things are also evolving slowly for our boys, as dads slowly redefine what it is to be a man. But at least the conversation has started in making the playing field equal for everyone in the family.