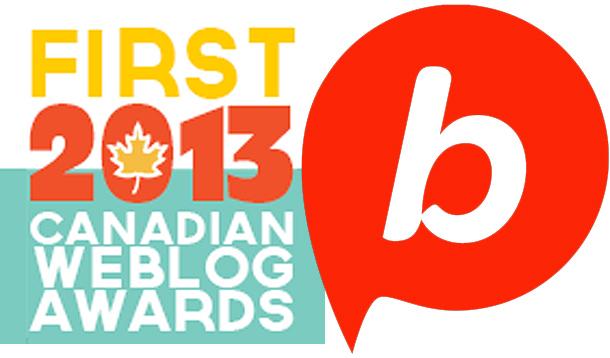 It was a week of good news for YMC. First, YMC was given the honour of First Place at the Canadian Weblog Awards (CWAs) in the General Interest category (for weblogs that cover a range of tips separated into different sections.)

Canadian Weblog Awards is a juried completion started by the awesome and eclectic Elan Morgan, aka @Schmutzie, to celebrate quality rather than popularity in weblogs. According to Schmutzie's blog, there were "492 weblogs nominated across 34 categories. Our 34 volunteer jurors worked hard over the course of this November and December using our 10 criteria to judge each of the 492 weblogs in the first round and each of the approximately 170 weblogs in the second round to arrive at our winners."

And that's why I am so thrilled to have made the final cut this year at the CWAs. A big shout out goes to the incredibly hardworking, seriously talented YMC team across Canada who work from their home offices to make YMC virtually come to life every day. A special shout out to Editor-in-Chief Ali Martell (who also won a separate CWA for Lifetime Achievement for her Cheaper Than Therapy blog), Managing Director Jen Charron for her attention to detail and big picture vision, Sharon DeVellis for sharing her voice with us, Karen Elliott (my first hire) who, 7 years later keeps YMC glitch-free, and Eileen Fisher who is a kick ass social media manager. 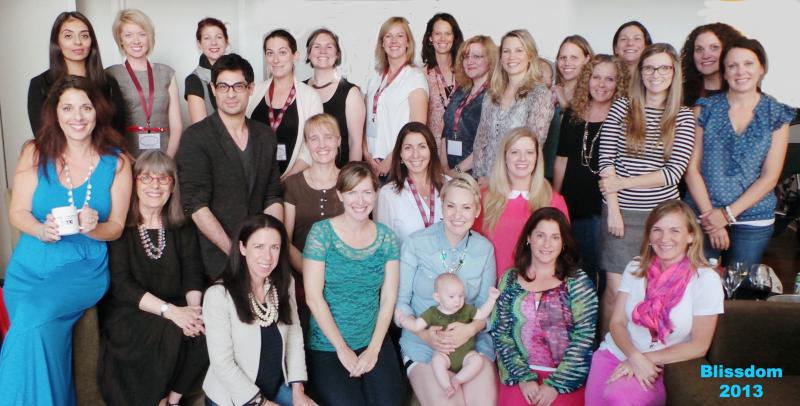 A big round of applause for our passionate gang of storytelling Bloggers who share their lives with us, our whipsmart Experts who share their expertise on YMC, and our Foodies who share their recipes with us. There are over 50 people who bring YMC to life on an ongoing basis, each handpicked for awesomeness. Plus, a shout out to the #YMCCommunity who also contribute their stories and opinions on YMC. Finally, I have to thank YOU — for visiting our site, reading, commenting, and sharing. All of us together make YMC the place to be.

Here's a full list of all the Canadian Weblog Awards Finalists for 2013.

If that didn't take the digital cake, then this announcement did.

If you haven't checked out Maija's blog yet and you're a time-crunched mom who needs to get dinner on the table, then you are missing out. Her Breakfast Muffins are legendary, her Chicken Parmesan Casserole is to die for and her Crockpot Chicken Noodle Soup is a lifesaver — to name just a few must-make recipes.

Luckily, both these awards are virtual, so there's no pressure to stand up in front of a bunch of strangers and give a messy thank you speech. Last year, when we won the Digi Award for Best Online Lifestyle Entertainment Property, this is what happened.

Through A Mom's Lens 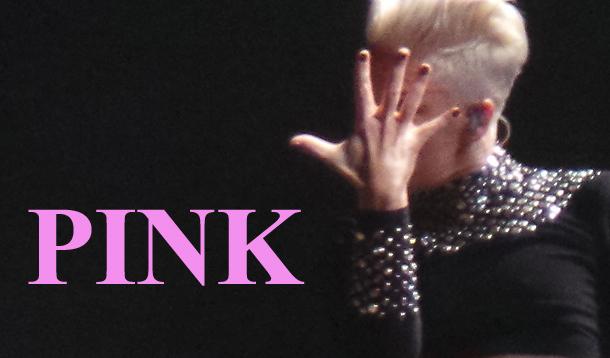 Not a lot of pop stars out there balance on the edge of naughty and nice like Pink does. I'm a big fan, especially since she became a mom to daughter Willow. As with all of us who've had kids, her priorities seem to have shifted a bit — in a good way. She seems to have found that healthy balance of being mom while being mighty; something some of us let go of because we have been overwhelmed by motherhood.

Clearly I'm not alone in my respect for Pink. When I went to the Pink concert at the Air Canada Center last night, I was surprised that a majority of the audience was filled with women like me partying with girlfriends, some with daughters or dates in tow.

Part of the fun for me during the show was seeing if I could capture Pink's powerful persona with my camera. Here are a few of my faves. 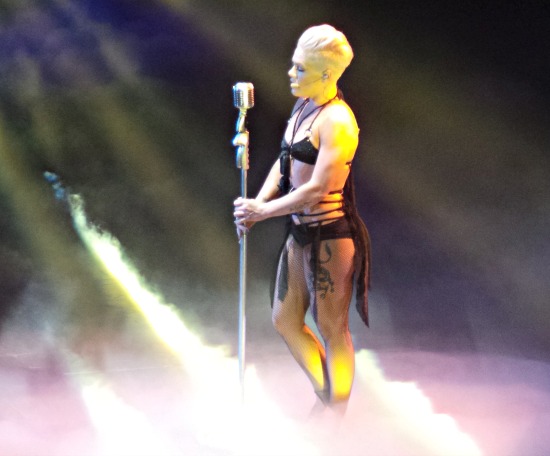 Part of what makes Pink's show so spectacular is her physical strength, as you can see from this photo. She has an athlete's body and isn't afraid to show it off. LOVE! 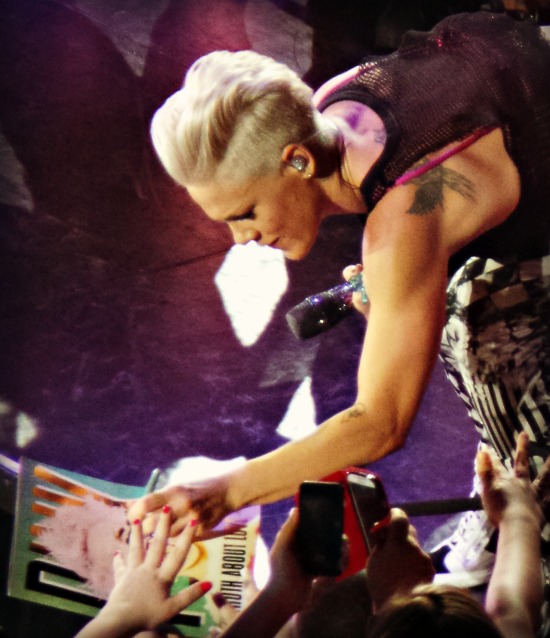 Throughout the show, Pink took time to stop and connect with fans who lined the stage. She signed their programs and other sundry body parts, vamped it up for the audience who probably got amazing shots on their phones, and shook a ton of hands with a smile that lit up the stadium. 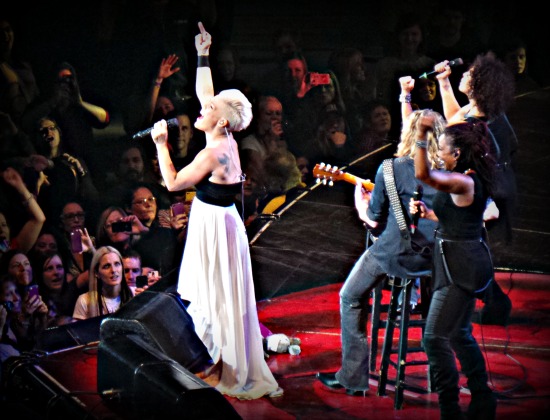 One of my fave Pink songs is "F-ing Perfect" which I initially heard when my son played it for me. He forewarned me that there was swearing in the lyrics. We've since found a clean version to listen to in the car. On stage, Pink told us that since having a daughter, she finds it difficult to swear when there are kids in the audience. So she performed the clean version of Perfect, except for the "finger" which she raised loud and proud in this photo. 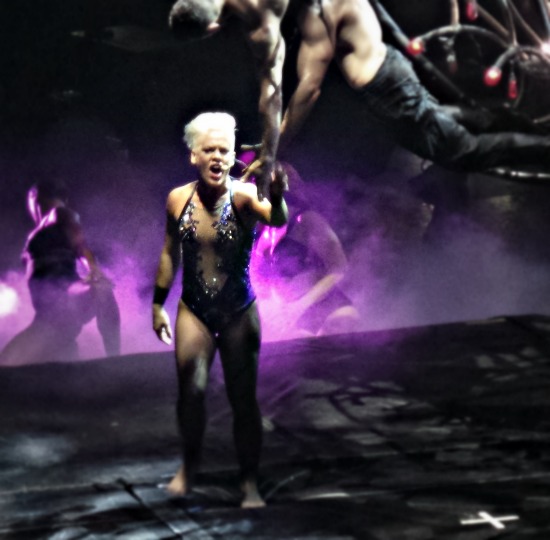 Pink's concert borrows from Cirque de Soleil. Clearly, Pink takes her acrobatics seriously. Her body strength is remarkable (hello, she's 34 years old and not small boned), and incorporated some remarkable choreography which had her spinning in a huge cylinder 30 feet about the stage while doing fairly dangerous poses hanging off the ball. I wonder if she had to take out huge insurance to be able to do these moves. In the photo, note the mat she's stepping on to protect her in case of a fall. Not that it would do much good. 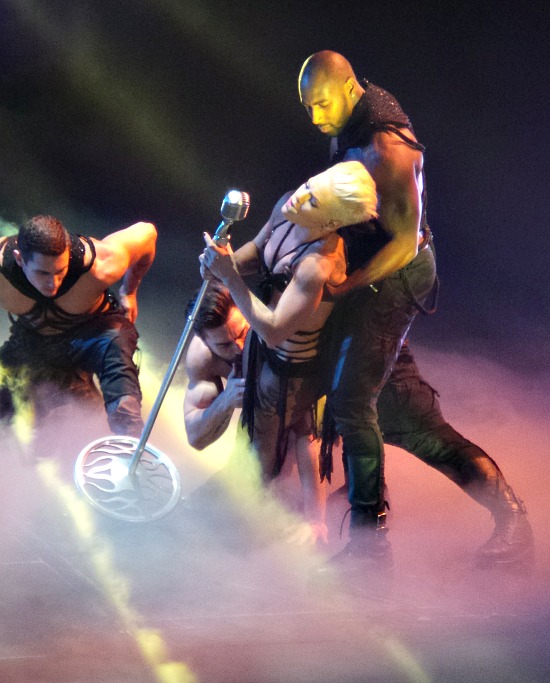 I call this one "Pink Sideways While Being Ravished By Three Gorgeous Men." 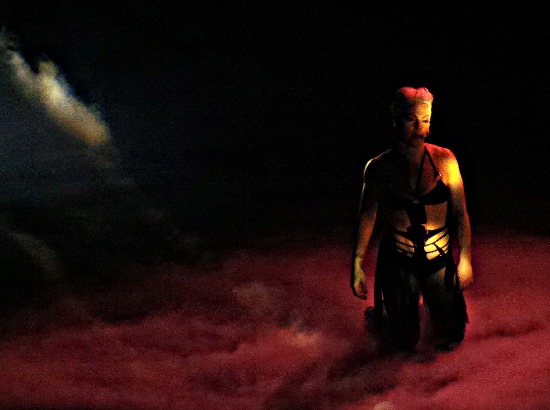 The show was very theatrical. Here's one of the moodier moments of the night. 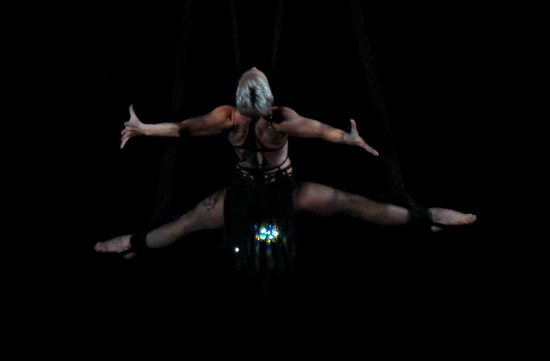 OMG, right? Look at her amazing body as she hangs thirty feet above the audience on a rope as seen in Cirque de Soleil. Moments before she was literally somersaulting in the air above us suspended by a rope. Plus she was singing. 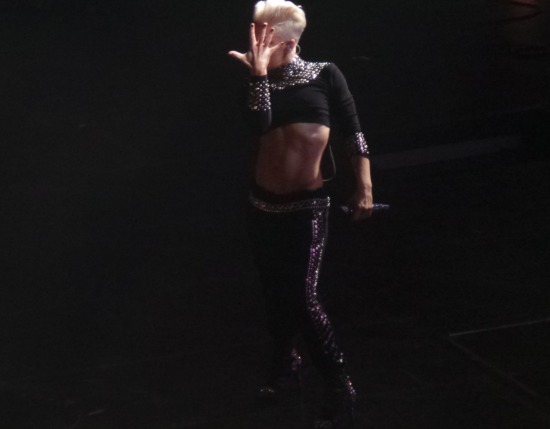 This is what a yummy mummy looks like. Empowered. Strong. In control. 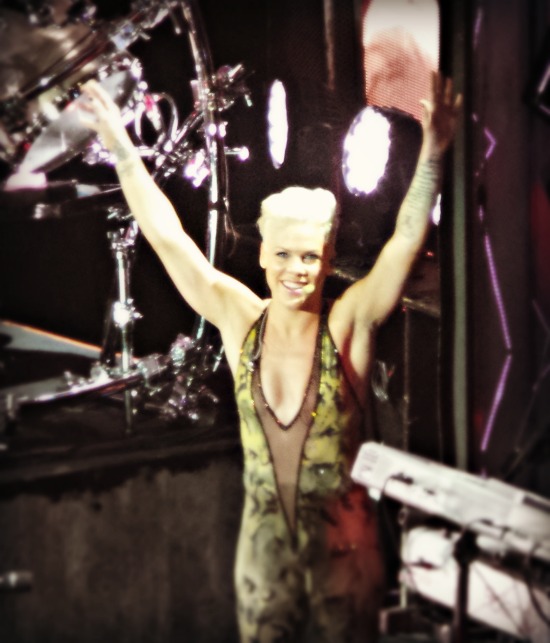 At the end of the show, I swear she looked right at me. And we bonded. Pink is my new role model. She's f-ing perfect to me.

A few months ago, I went to see Taylor Swift in concert I took my daughter and the experience was quite different. See for yourself.

Erica Ehm Exposed! Fun Stuff to Do With Kids in PEI To Make Them Smarter