Spark a change and show your thanks by giving back 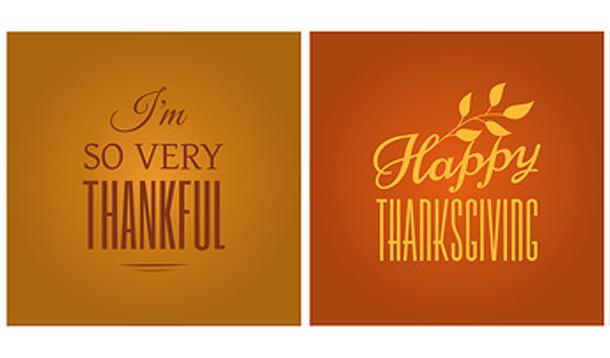 I’m always curious how other families celebrate holidays. It wasn’t until I was in my early 30s, pre-kids, when I rented a farm for the summer that I started to celebrate Thanksgiving. Even though I don’t like cooking, I would invite my friends over for a big meal where we would laugh, share stories, and eat way too much.

Fast forward a decade and that Thanksgiving is still celebrated at my house. We’re very low-key, celebrating with a small group of family and occasionally, friends. I do my best at making a big meal—nothing grand because I still don’t like to cook—and reconnect with my loved ones. It’s also a time to reflect on what we’re thankful for in our lives. At some point during the day I always ask my two kids, Josh and Jessie, what they are thankful for. Sometimes their answers make me laugh, other times they make me think.

But this year I’m going to make them think.

I have been a supporter of World Vision ever since I went on a life-changing trip with them to Malawi five years ago.

This year, World Vision has added a new way to donate through their new and unique World Vision Spark program. This new program gives you the freedom to read about and choose who and what you will donate. You simply visit www.sparkchange.ca, read about different families, discover what they need, and then donate money to help them bring their idea to life. For as little as $20.00, your donation will spark a difference in their life.

I spent over an hour on their Spark website reading about families like Hasmik and her two children who would like a washroom in their house. Hasmik says, "We don't have a toilet and washroom and don't feel like human beings." Or the Dayawan community in the Philippines who are working together to build a business that makes a coffee substitute from corn so they can support their families. A simple labeling machine can make this happen.

That’s how I’m going to make my children think this Thanksgiving. Instead of asking Josh and Jessie what they are thankful for, we are going to sit in front of the computer and read the stories of families and communities in Armenia, Georgia, Niger, and the Philippines. Then I’m going to have each of them choose one to make a donation.

What makes this even more impactful is that from now until October 27th, YMC will match every dollar donated by YMC members through World Vision’s Spark website, up to $1,000.00 CDN.

So when I ask how you’re celebrating your Thanksgiving this year, what I’m really hoping is that you will join me in making a difference in the lives of families who could truly use your help. Sit with your kids, read the stories, and have them choose who they will donate to. Use it to not only spark a difference in lives around the world, but to spark conversation and teach your kids about giving back.

This year celebrate Thanksgiving by having another family thankful you were able to help. 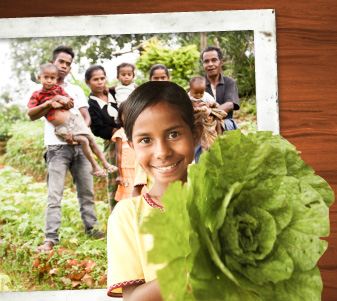 We’ve teamed up with World Vision so you can make a difference in the lives of families who are less fortunate. Simply visit www.sparkchange.ca, choose a family, and help bring their idea to life.
To help make even more of a difference, YMC will match every dollar donated by YMC members through World Vision's Spark website, up to $1,000.00 CDN.
World Vision Spark. Spark a Difference.
Category:
Life - Give
Tags:
giving back
families in need
world vision
world vision spark
giving thanks
thanksgiving
erica ehm

This is proudly sponsored by our friends at World Vision.
www.sparkchange.ca

Get a Discount and Sit With me! 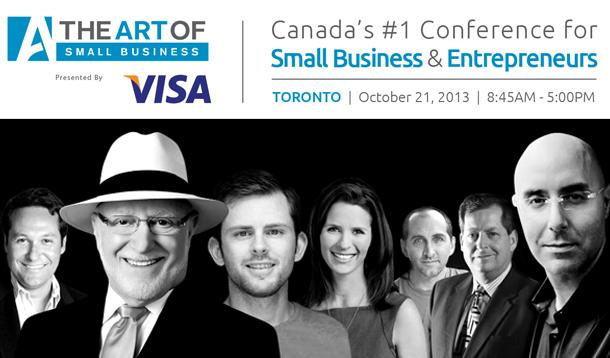 Sometimes I can't make my mind up about attending one of the many conferences available to entrepeneurs but the Art of Small Business is a must for me. And I think you should come with me.

This past spring I grabbed a pass for The Art of Marketing Conference and I was totally inspired at the end of the day. The highlight for me was listening to Biz Stone, co-creator of Twitter, talk about its inception. I even asked him a question from the audience about how he felt about the increasing commercialization of Twitter (he has no problem with it), and told him how it's changed my life (it changed mine too he quipped back). Look at these awesome shots I took of him.

The problem was (cue the violins), I had no one to go to the conference with. So this time, I'm giving you fair warning!

If you are are entrepeneur, on October 21 you need to be at The Art of Small Business conference in Toronto (with me!).

The big draw for me is my business mentor Michael Gerber, author of the bestselling The E-Myth Revisited, is headlining. When YMC shifted from a hobby to becoming a business for me, this book become my business bible. Being an entrepreneur is incredibly hard and sometimes you need to admit you need help!

I cannot wait to get a lesson from Mr. Gerber in person, to clarify how to simplify the dos and don'ts of managing a small business. His promised topic is at the conference is How to Turn your Biggest Problems into your Biggest Opportunities. Seeing as I'm an opportunist, this is just up my alley.

And then there is the awesome Mitch Joel. I have been trying to hear Mitch Joel speak since he released his most recent book CTRL ALT Delete. Mitch is a social media business guru who is light years ahead of the rest of us. I heard him speak a couple of years ago, and still quote him when I'm trying to sound extremely knowledgeable.

Chris Guillebeau is a NY Times Bestselling Author of the $100 Start Up. He'll be sharing tips and tricks on starting and running a business on a shoestring. The reality is, most of us don't have deep pocketbooks and any tips I can get on being more cost-effective is worth the price of admission.

Speaking of saving money, I have sweet talked the nice guys who organize The Art of Small Business conference to get a preferred rate (DISCOUNT!) for all the talented YMC members who are entrepreneurs and mompreneurs (hello Maria Locker!). All you need to do to get the discount is GO HERE and use this code: YUMMYMUMMY26

By using the discount code you don't actually have to sit with me. You can bring a bunch of your friends or colleagues and I won't be offended. But if you do want to hang out, please leave me a message in the comments below to let me know that you will be there so we can hook up!

By the way, if you're an entrepreneur, you'll probably like the this blog by my business coaches Amy and Danielle who really get it.

How the other half parties 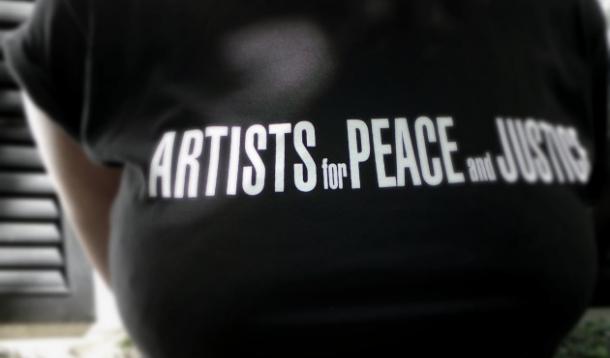 It's the kind of last minute invitation I couldn't turn down - a ticket to the Artists for Peace and Justice Fundraiser. This isn't just any benefit show. It's an exclusive, chi-chi event held in the magnificent backyard of Roots co-founder Michael Budman in the heart of Toronto during the Toronto International Film Festival. Writer/director Paul Haggis (Crash, Million Dollar Baby), is the brainchild of the charity which raises money to help the impoverished people of Haiti. Cost per ticket - over $1200!! 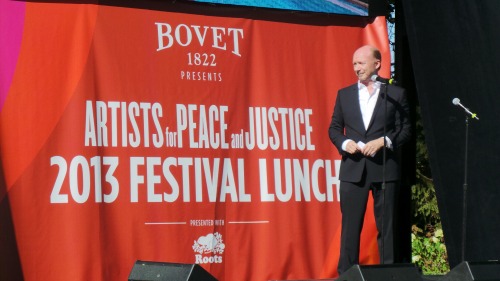 Originally from Toronto, this is the 5th year that Hollywood based Haggis has organized this event during the film fest to take advantage of the star power to increase the draw and dollars.

First, let's talk about Michael Budman's backyard. Well, it is huge. Big enough for a full size pool and cabana house, a stage for the days' performances, a ton of catering and sofas, and then some. There's so much space he even has a full sized hockey rink which apparently gets used a lot in the winter! Although I only peeked into his house and spotted his gorgeous all white kitchen, I was told that the inside is all stunning art deco. I couldn't help watching him watch the afternoon unfold. 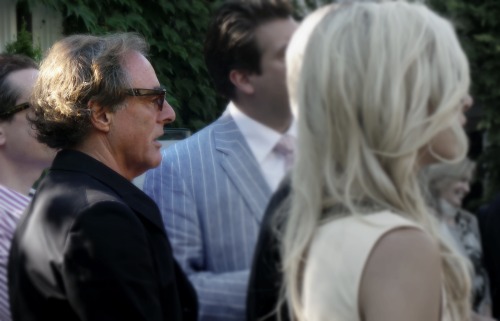 But the action at this shindig was really outside in the backyard where Daniel Lanois, Rufus Wainright and Micheal Bolton (!) each performed a short set. I was crossing my fingers that when Daniel Lanois came onstage he'd bring on Bono or Emily Lou Harris, but no such luck. 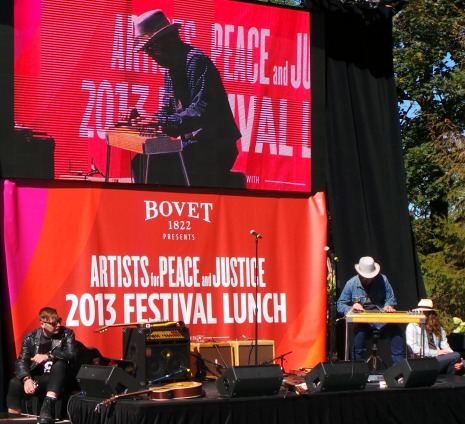 The first famous face I bumped into was the lovely and talented Traci Melchor, my old buddy from MuchMusic who is now one of the hosts of the new CTV talk show The Social. Have you seen it yet? I just found out the show is being shot in what was the old MuchMusic studio. How times have changed! 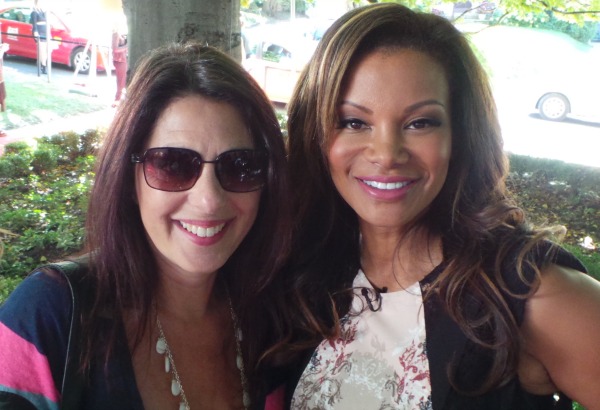 Speaking of TV, Canada's heart throb George Strombo arrived bedecked in a polka dot shirt, navy bow tie and black suit jacket. Very dapper. He also seems to have lost a lot of weight (not that he needed to. He was hot before!). 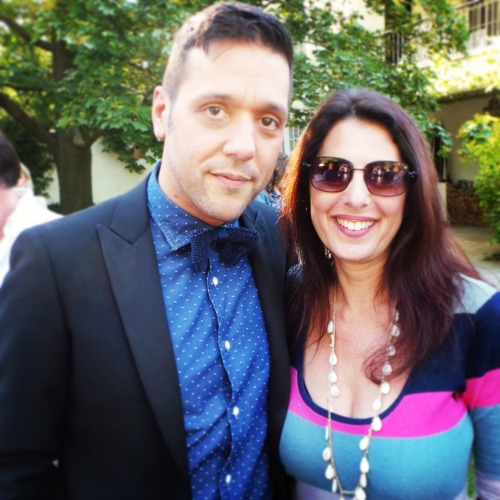 He whipped out a photo to show me of one of his many beloved motorcycles on his phone. I said something like "you keep photos of your bikes like I do of my kids." His response? "I don't want kids. I just want motorcycles." You gotta love a guy who know what he wants!

And then he showed off a photo of himself on one of his many solo motorcycle tours across the States proudly donning a beard. What do you think? Hot or not? 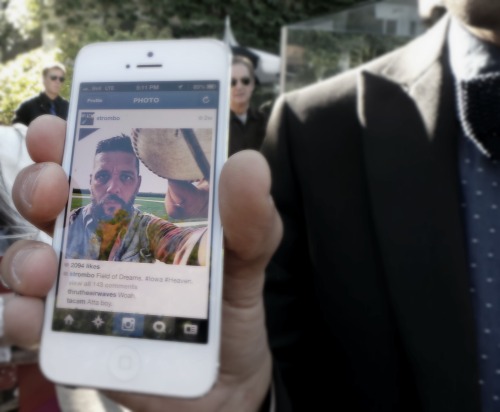 As for Hollywood A-listers. I chatted with Paul Haggis briefly, pulling out the I-used-to-be-on-MuchMusic card so he'd remember me (which he did). I'd met him at the Gemini awards years ago when he was working with Paul Gross on the series Due South. He was gracious taking photos with me and all my friends, and anyone brave enough to ask him to pose. 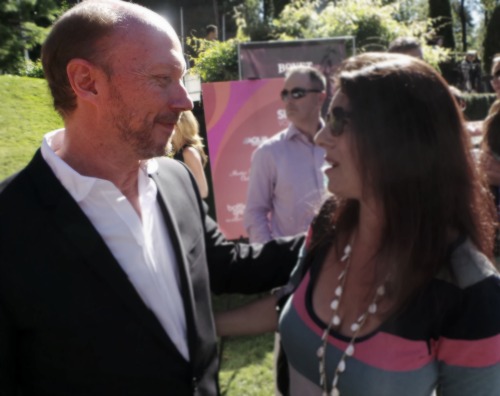 The real reason Haggis is in town is to promote his new film Third Person, bringing a number of his actors to the party like Adrian Brody (The Pianist) and Moran Atlas. 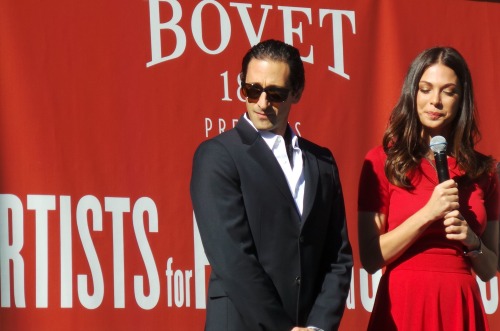 But the highlight of the party for me was definitely Oscar nominated actress Maria Bello. First, she happily sauntered over to have her photo taken - very down to earth. 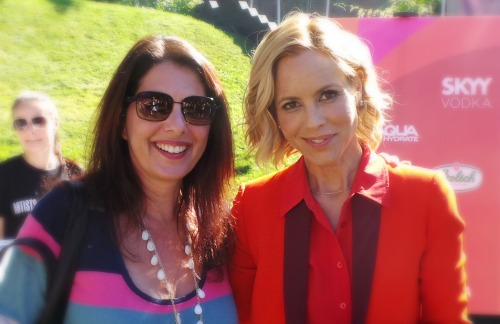 Then she headed to the stage built just beside the pool to kick off the auction and surprised the crowd by offering to jump into the pool fully clothed if someone donated $10,000 to Artists for Peace and Justice. Within minutes the auctioneer had a willing person to donate over $10,000! He was invited to come onto the stage and push Maria into the pool wearing her very fancy suit. Luckily I had my awesome Samsung Galaxy camera with me and snapped this action shot of Maria being pushed in. 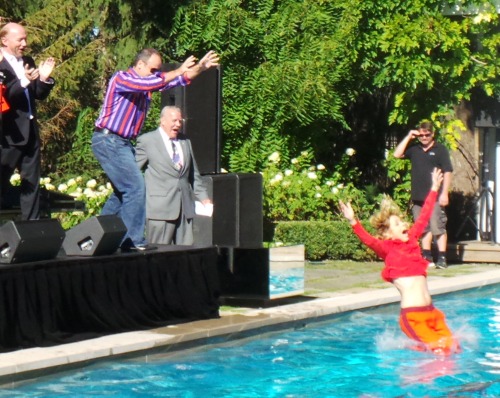 Don't worry. She took off her red Loboutins before she was pushed. Some things just can't be sacrificed for charity.