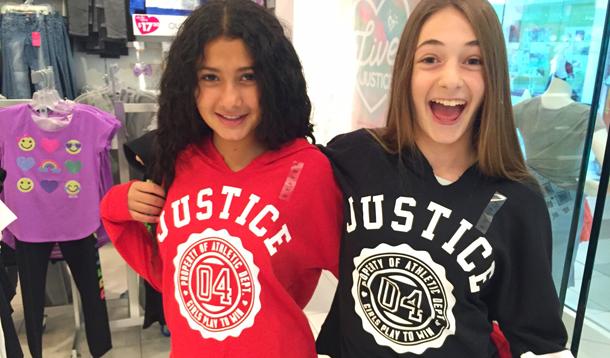 When my daughter was little, back to school shopping meant heading out to a store of my choice to pick out her first-day-of-school outfit. Sure, I let her choose which outfit she preferred, but ultimately I was in control. I don't need to tell you that by age 10 (or sometimes even younger), our kids' fashion tastes are already deeply influenced by pop culture and social media. The problem is what they may want to wear, based on the lack of great online role models, may not be appropriate for their age and stage.

"Mom, can I get the crop top that Kim Kardashian wore on the red carpet for my first day at school?
"Sure," SAID NO MOM EVER.

The result is a back-to-school shopping nightmare where kids and moms disagree on what to buy. Yes, you can be a dictactor and respond with "listen young lady, I pay for your clothes and you will wear what I think is appropriate. End of conversation." News flash! That may not end well with your potentially hormonal pre-teen. My solution to maintain a smidge of control over what your tween actual ends up purchasing is to choose which stores you agree to shop at very carefully. 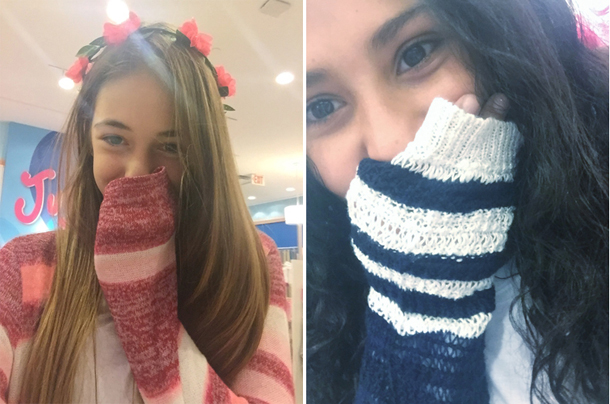 There are a few chains both my daughter and I always feel comfortable in. Triple Flip and Ivivva focus on chic, practical gear specifically for athletic girls that are on the pricier side. But for back-to-school clothing, our go-to retailer is definitely Justice. Added bonus? They're easier on the wallet plus they have super cute athletic wear.

Justice is a fashion heaven for girls like my daughter who want to be on-trend and have their own sense of style.

The shelves are stocked with clothing that reflects what's hot in pop culture and resonates with girls today: sporty, girly, fashionista, or just casual. It's all about inspiring girls to be individuals and to define their own sense of style. And, the best part for me? The collections are age-appropriate. 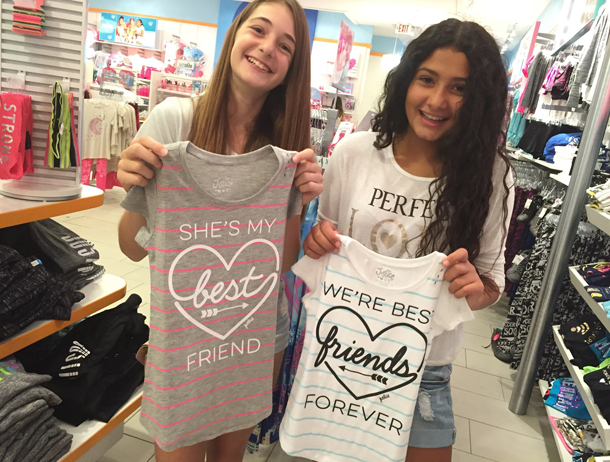 This weekend I brought Jessie (12) and her BFF Bridget (13) to do some back-to-school shopping and beat the rush. I figured they're old enough to pick out all the outfits themselves. They got to work shopping while I snapped a bunch of photos of them in action. 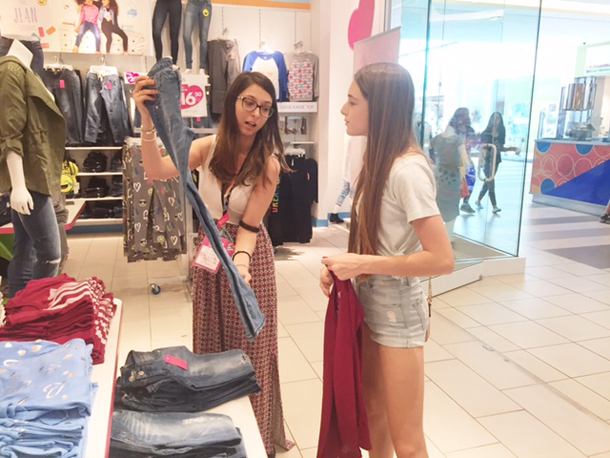 So, if you're wondering what's hot for tweens this fall, these are some of the looks Jessie and Bridgette loved.

My daughter Jessie describes her look as trendy and in-style. She feels she's moving away from her girlie wardrobe filled with bright colours and sparkles to a more boho vibe. She assembled this look which consists of a jean skort ($29.90), a white short sleeved tee ($7) and gorgeous long boho-chic striped sweater ($29.90). She finished it off with comfy tan booties ($44.90). For the record, I'd wear this outfit myself with jeans. 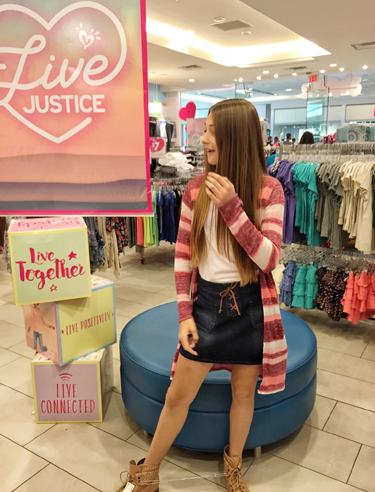 Bridget describes her style as cozy sporty. She likes wearing darker solids like blacks and grey. She loved these black sweatpants ($16.50) because she says they look like leggings and are incredibly comfy. 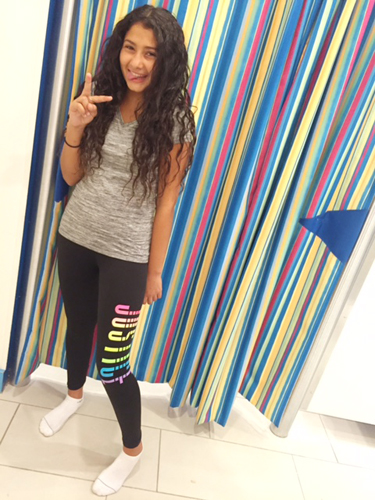 My daughter's style is getting pretty sophisticated. She paired this peasant blouse ($26.90) with her jean skirt and booties. 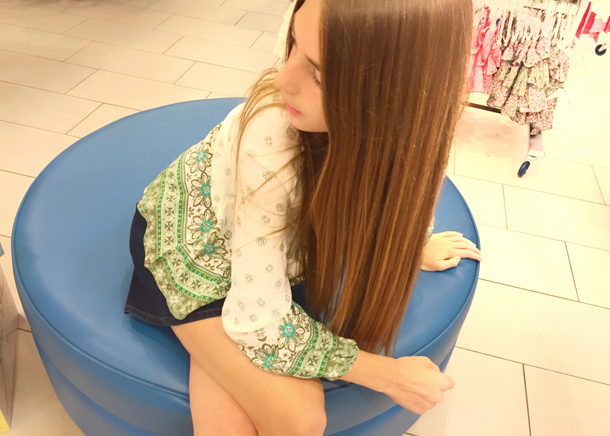 Bridget likes T's with cute designs and numbers and there were so many for her to choose from. I was happy to see that all the sayings are positive, reminding girls to be strong, independent and fearless. 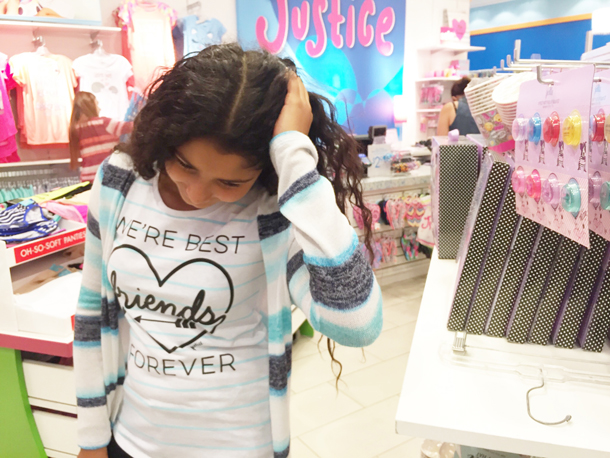 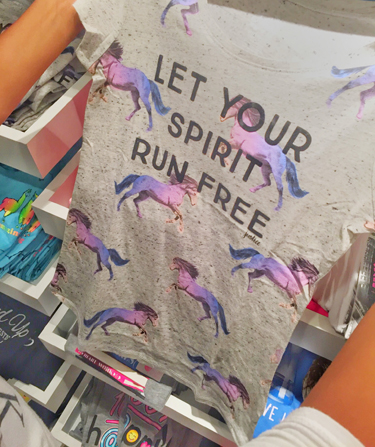 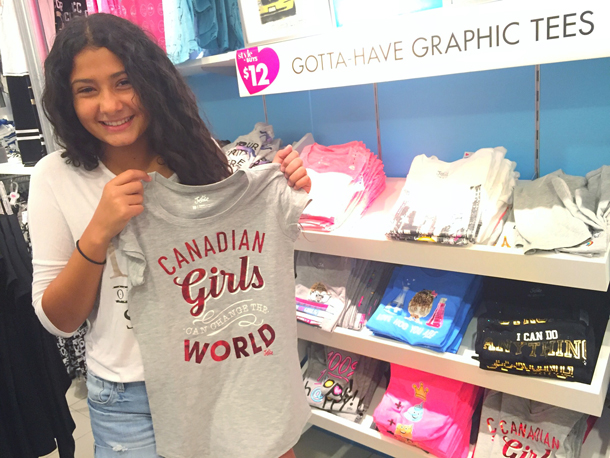 Bridget is attracted to sporty style like this soccer tee ($24.90) and is hoping to make the team this year at school. 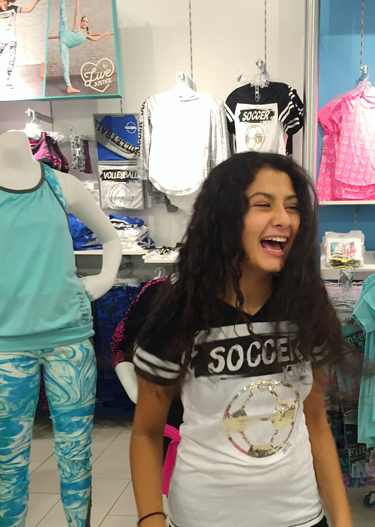 My daughter says she likes a stylish mix and match look, but will only buy an outfit if it's comfortable. These stretchy distressed jeggings ($32.90) and long sleeved "Love" shirt ($17.50) will be perfect at school. 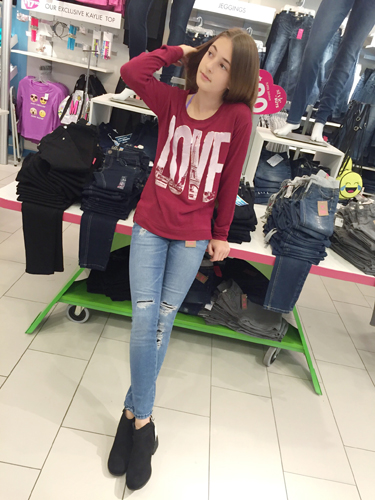 When you're taking your tween clothes shopping, look for stores like this one that have a wide variety of styles. It was interesting to watch my daughter and her friend navigate the various sections and put together very different looks. Bridget loved this long-sleeved striped tee ($10), which she layered with a flannel shirt ($20) and jeggings ($20) which she says were incredibly comfortable. Another thing to note about Justice is their sizing is true. Both girls fit in size 12 even though they have slightly different body types. 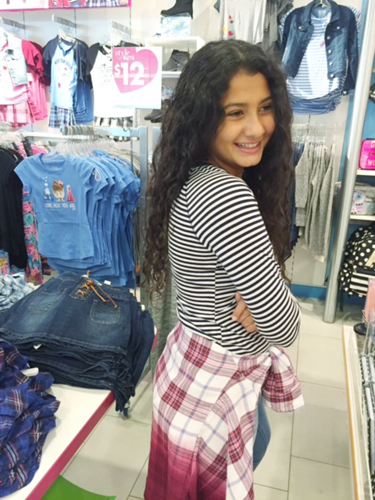 I was also impressed how practical the girls were when they were putting together outfits. Each of them looked for warmer outfits to plan ahead for the upcoming fall chill. Bridgette looked adorable in this blue and white sweater ($36.90). 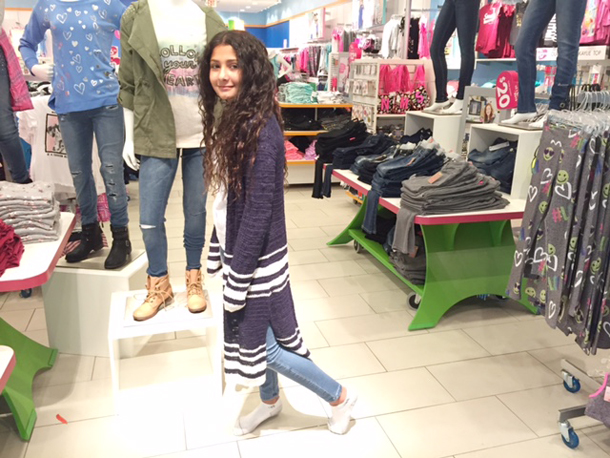 And my daughter rocked this striped dress with a khaki jacket ($39.50). Can you tell she loved those khaki booties. She wouldn't take them off. 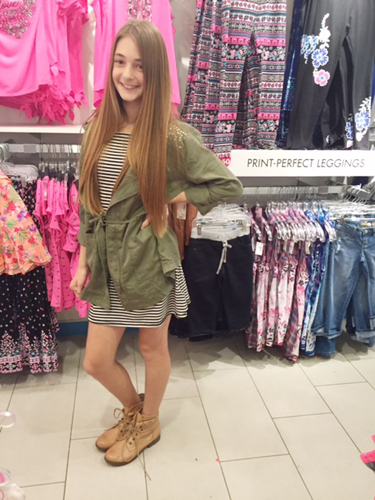 All in all, I spent over two hours sitting on my "mom stool" watching the girls do their back to school shopping together. It was easy, it empowered them, and it didn't break the bank. This is proudly sponsored by our friends at Justice.
https://www.youtube.com/user/ShopJustice

It's time to change the conversation 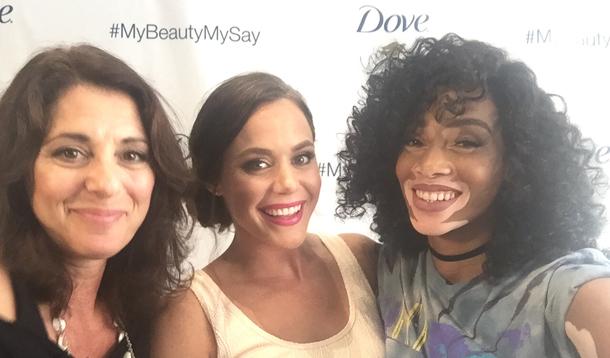 Imagine watching your daughter train eight hours a day since she was a young girl, eventually rising in the ranks to compete in her sport. She makes the finals, and instead of you reading about her triple axle jump or the three goals she scored, media outlets report that "her ass is quality", that "she's built like a fire hydrant" or that "she's really hot with her curves and careless blonde hair". What if I told you those are direct quotes from media outlets about some of our top female athletes. It's no secret that focusing on someone's appearance diminishes their accomplishments. This is not the world I want my daughter growing up in. It's time to change the conversation and demand the media to do better.

I'm getting all mama bear about this. Protecting my daughter's right to be treated as an equal to her male counterparts is something I'm taking on as a personal mission. I want you to help me.

Luckily, I know people with pull who are also on the some page and am able to leverage my voice to get the conversation started. I partnered with Dove Canada to host a #MyBeautyMySay Facebook Live interview with two extraodinary young women who both experience ongoing misogynistic and demeaning comments.

Tessa Virtue is an Olympic Gold Medalist in ice dancing. She and her skating partner, Scott Moir, have trained together since they were kids, practicing upwards of eight hours a day to become world champions. Winnie Harlow has become an international top model, despite being diagnosed with vitiligo and not fitting into what is considered to be "traditional beauty." During our live chat, both of these smart, talented women had some powerful insights on the double standard women and girls are still dealing with. You can watch the interview here:

“Tessa is heavy, therefore she is lazy.”

That was something Tessa heard a reporter say about her in her teens. Can you imagine? At the time, she was working out and skating 10 to 11 hours a day and building strong muscle in order to perform world class dance moves on the ice. His offhand remark greatly affected her. She internalized it, questioning her self worth and her work ethic. Wondering if maybe she was lazy? Looking back, she wonders why the reporter didn't use words like powerful to describe her instead.

It's heartbreaking to realize how a flippant remark from some less-than-average writer can have a profound affect on one's self esteem. Words do matter. In Tessa's case, they could have led to body image issues. Luckily, she has been surrounded with a strong team to help her cope with the nastiness of life in the public eye and misguided media comments.

She talked to me about the vulnerability of being an athlete, standing there all alone with the world watching them, knowing they are being judged not just on their athleticism, but on how they look.

When did this obsession with looks over accomplishments overtake society? Why do we value physical beauty over talent and expertise? Why are we putting people with no skills other than knowing how to pose for an Instagram photo on pedestals. Society's values are out of line and the media is just jumping on what we allow.

Winnie said, "We blame the media a lot but the media gives us what we ask for. So, now we are asking for a change and doing something proactive about it, so media will have no choice but to give us what we want." She’s so right. Changing the conversation and shifting focus *does* happen because of the support from me and you for campaigns like this one from Dove.

We need to have our say and vote with our dollars. Support media outlets, brands, and public personalities who reinforce powerful messages. Call out the "journalists" (I use that term loosely) when you hear them focusing on a female athlete's looks rather than her strengths. Dove put together this cool online tool where you can literally tweet at those media outlets to call them out on their superficial, degrading language.

The truth is, it's not just the media who get distracted by external beauty. We all do it to some degree or other...even me. My daughter dances twelve hours a week. Occasionally, I find myself telling her how beautiful she looks dancing. What I really mean to say is how strong, powerful, graceful, poised, and kick ass she is. 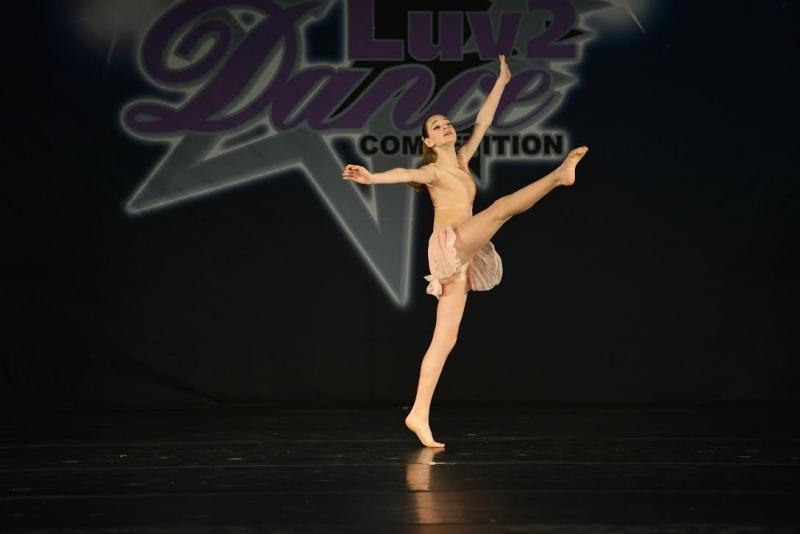 Beauty is the result of being strong, powerful, graceful, poised, and kick ass. It's an external representation of what's inside. Great hair or conventionally pretty features can never compare to personal achievement.

"My message isn’t everyone can be a model," Winnie told me. "That's not what I’m aiming for. It’s if you put your mind to what you want, you can achieve it. And that’s what’s important. Not being in a magazine. No. If your goal is to be a doctor, work hard go to school, get your education and make that your runway.”

Tessa wrapped it up nicely for me. “Lead by example and teach people how you want to be treated."

Do it! Our daughters (and we) deserve better.