My son is into old school card trading, and it's not all bad! 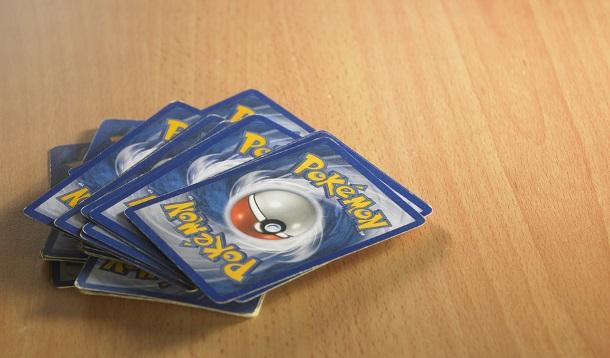 The era of Pokémon is upon us, and I’m becoming a reluctant expert in damage points, energy, and Mega Charizard. The object of your child’s obsession is annoying by definition. “Please tell me more about your current obsession, because hearing about it twenty four seven just doesn’t cut it anymore,” said no parent ever. Despite its inherent annoying-ness, I’ve recently started warming up to Pokémon and what it represents on a larger scale. As my seven year-old son trades cards with his friends, I can hear him negotiate, facilitate, convince, and sometimes walk away disappointed. Every interaction I observe always seems to transcend its immediate Pokémon card-trading context and becomes about something bigger.

Maybe it’s because I’m his mother and mothers have a built-in converter that makes everyday situations appear to be much bigger and more significant than they actually are. Or maybe there’s just something about the way that card trading engages children, which makes for a very good “real life situation” simulator. Through those interactions, we’ve touched upon a wide array of important life skills.

“Mom, I wish I didn’t give Blake my card. It was my favorite.”

“By saying ‘please’ over and over again.”

My son and I often talk about saying ‘no’ to things that you’re not comfortable with. Evidently, it’s a work in progress. This time around I explain to him that his friend didn’t “make him” do anything.  It was him, my son, who DECIDED to trade the coveted card because he thought it was the right thing to do, or the nice to do, or maybe it even seemed like the only thing to do in order to not compromise the friendship. I tell him that ‘NO’ should be non-negotiable and that if he treats it that way, so will his friends.

Card trading is helping my son learn to understand that saying ‘no’ doesn’t make you bad or unlikable. It is not an insult to the other person and shouldn’t drive a good friend away. Assertiveness is a hard concept to explain to a seven year-old, but card trading provided us with a great excuse for initiating a conversation about setting boundaries and I think that that is where assertiveness begins.

“YES!!! NO TRADE BACKS UNDER MY COMMAND, DIBSIES, PERMANENT MARKER. “

Max has my son’s Mega-Grouch-or-whatever card. My son still views it as “HIS” card even though it’s been out of his possession for a much longer time than he had actually owned it. There’s a lesson in here about tenacity, but the more immediate one is on the importance of attention to detail. My son’s friend thoroughly studied the card and read the small print. Literally. My son, on the other hand, didn’t.

Kids and attention to detail often don’t go hand in hand, and the reasons for that may vary. In my child’s case I’m pretty sure that it’s his incredible imagination which sometimes distracts him. He constructs a fantastic scenario in his mind and rushes toward the end result, skipping the details on his way. I absolutely adore the breadth of his imagination and the heights to which it soars with such enthusiasm. At the same time, he is learning that soaring and achieving his goals will sometimes involve some tedious and uninspiring work – like reading the fine print.

Patience is the root cause of many of the arguments we have at home. Or is it the other way around? Either way, watching my son trade Pokémon cards revealed a shocking fact. As it turns out, my child wasn’t born patience-less - his capacity for patience is context-dependent! My seven year-old keeps coming back to his two friends (Assertiveness and Attention to Detail) with a new trade plan and gets rejected. Every. Single. Time. Lo and behold: instead of sulking or demanding to go back to the store and purchase ALL THE POKÉMON CARDS until one of the packs produces a Mega-Grouch-or-whatever, he just keeps trying to up his negotiation game and keeps on keeping on.

I’d like to tell you that it fills my heart with endless glee to watch my child get a taste of his own medicine, but it doesn’t. I spend about 20% of my day negotiating. That doesn’t seem like much, I know, but that’s only because I spend the other 80% being ignored.  The truth is that, like all of us, I’m a mama bear and it takes everything in me to not interject and offer the insight “hey, you’re getting ripped off here, buddy." My son wants everyone to be happy and often puts the needs of others before his own. Negotiating as he trades his cards forces him to practice small-scale conflict resolution and other situations that he typically tries to sidestep in everyday life.

My seven year-old possesses that quality of empathy in abundance, but as it turns out, he can flip the switch off when it comes to his three year-old brother. In the name of equality, our younger child had also been gifted some Pokémon cards of his own which he, in turn, tries to distribute among his older brother’s friends. Naturally, our toddler doesn’t understand the concept of trading, which basically invites the older sibling and some of his friends to take advantage of the situation. Treating his little brother respectfully is a work in progress, however my older child is learning that the younger sibling has equal rights, and I’ve noticed some improvement in that regard. In typical second child manner, the three year-old has taken to hiding his cards under the pillow in his room, a secret location he himself revealed to everyone else in the family. Before his older brother would nonchalantly retrieve needed cards from under his younger sibling’s pillow whenever the need arose, but after being confronted about it, he now asks for his brother’s permission to use one of his cards for trading and offers a replacement in return.

Clearly trading cards presents my child with ample opportunity to practice important life skills and to work on some areas requiring improvement. Every child is different, and some of what my son is learning through card trading may not be relevant for yours. Regardless of whether your child is outspoken or an introvert, a people pleaser or assertive, negotiating in a way that is respectful and based on empathy and kindness is universally important and card trading can be used by parents to enforce that message.

Surprisingly enough, your child won’t be the only one learning. Some of the observations I’ve made had to do with my own parenting style as it revealed itself in the way I reacted to the various situations that arose during those often emotional and loud card exchange sessions. I am learning to keep fighting my urge to interfere and advocate on my son’s behalf. I’m learning that he possesses some qualities I’ve long written off based on my interactions with him. Most importantly I’m learning that observing my child outside of the mother/son/older sibling context can teach me a lot about him and that if you pay close attention you’ll find that parenting wisdom can be offered by anyone.

RELATED: Pokemon GO Can Be Hazardous to Your Health

Katia Bishops: The Designated Grownup In Search of Cinderella's Backbone