Have We Started Sacrificing Animals for Likes? 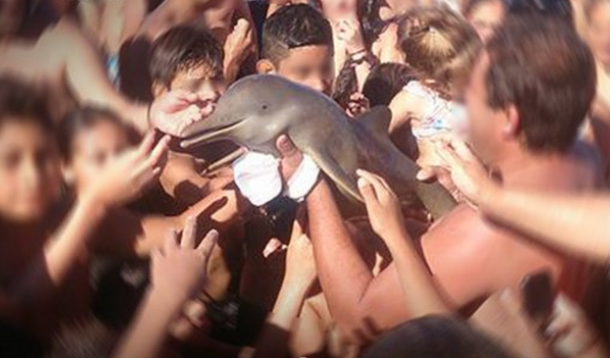 Some days I wish that there was an app that would screen my feed and omit the stories that are too much for me to handle. Like the one about the baby dolphin that died of dehydration when it was being passed around on the Santa Teresita beach in Argentina for selfies and photographs.

During the month of February we dedicate many of our posts on Yummy Mummy Club to the topic of love. I was struggling this month and waited for inspiration to strike, but it didn’t. When I was punched in the gut by my very own feed this afternoon, a very different kind of inspiration ensued. If there is an animal symbolic of love and kindness it’s probably the dolphin, so much so that I have a friend who jokingly says she’s convinced they’re not real, that they’re a legend, like the unicorn. Out of love and kindness compassion is born. If there’s an opposite of compassion it can be found in this story. Reluctantly I skimmed it, unable to submit myself to the details (baby, rare breed – La Plata, body simply left on shore once all interest wore off). I’m sure we can all agree that this is epically sad, Hans Christian Andersen’s Little Match Girl or Oscar Wilde’s The Nightingale and The Rose levels of sad. Universally and undeniably gut wrenching, right?

Wrong. Shockingly, aside from this rather large group of people on a beach in Argentina — conveniently not in our backyard, allowing us to chalk it all up to “cultural differences” whatever that means — who think that there is quite literally nothing wrong with this picture, there are also others around the world reading about this on news websites and making comments along the lines of:

“Taking pictures with a cute animal is hardly a barbaric act.”

So what is this post about? I do not intend to waste a second of my life battling the windmills of stupidity or educating sociopathic trolls. I won’t wax lyrical about the fact that one should, basically, never sacrifice an animal in the name of an original selfie. This is not a “how to not suck at human being” informative/educational post or a “dear people who think that pulling a baby dolphin out of the water to take a picture with you is a good idea, go fuck yourselves” open letter. What I want to do is try to understand what the hell is going on. How did something like that become possible?

Different eras glorify different values and obliterate others, but it seems like compassion should be timeless. It is one of our defining traits as humans. What is it about our time that allows this?

In our age an experience has to broadcasted to count as an occurrence. It has to be liked to define and quantify its value. And strangely, even paradoxically for an era that on paper, or screen, seems so self-centered, so focused on the shell (I mean we’re selling and buying selfie sticks, okay?) our experiences, our selves are so completely dependent on others – an audience, a viewer.

Sometimes reality creates symbolic images like the little boy washed to the shore. Like the little dolphin in a sea of people. If we’re lucky such images can create a positive shift. Maybe this post shouldn’t be about answering questions, maybe I should ask them instead. What does this image speak of?

Are we so obsessed with the gratification that we get from likes that this has become our new form of worship? Isn’t that what people used to sacrifice animals for? I thought we had more compassion, but I could have been wrong. Maybe compassion is not for humans, just dolphins.