The Crayon Colour Crayola is Kicking to the Curb

Well, There Goes Our Childhood 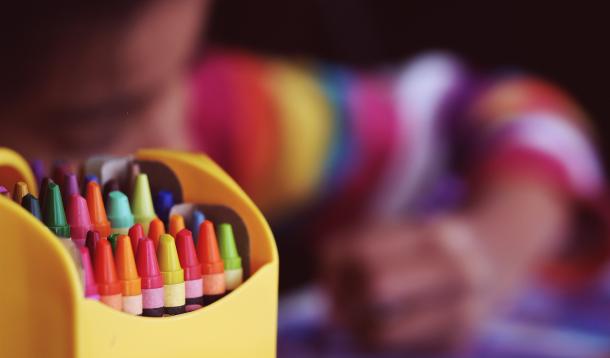 First, they replaced the sharp pointy ends of Kerplunk sticks with rounded, non-stabby ends. Then they stopped making teeter totters for playgrounds (No, I absolutely promise I won’t jump off when I’m at the bottom! Pinkie swear!). And the final icing on the cake was when Easy Bake Oven got rid of the 100 watt incandescent light bulb as a heating source and replaced it with a safe heating element. I still have a scar from my friend’s oven when I was overly enthusiastic about getting out my vanilla cake.

All of the things that helped us build character in the 70s are going the way of the dinosaur.

Well, it looks like Crayola is the next to throw shade on our childhood. It’s National Crayon Day, and for the first time in its 100-plus year history, Crayola gave the green light to discontinue a colour from its 24-count box.

That’s right, today via livestream from Times Square your beloved "Dandelion" yellow was kicked to the curb. Blown right out of the pack. Now your only chance of getting a crayon in that colour is to run out and buy a 24-pack right now while it’s still on the shelves.

As if erasing "Dandelion" from our childhood colour palette wasn’t enough, earlier this month Monopoly said toodle-loo to the thimble, sent the wheelbarrow on its way, and gave the boot to the boot. They allowed the internet to choose, and more than 4 million voters from 146 countries weighed in on what would replace those iconic pieces. Now, future Monopoly games will feature a Tyrannosaurus rex, a penguin, and a rubber ducky. Thankfully, the winking emoji and hashtag didn’t make the cut.

So it looks like another few pieces of my childhood are gone forever. The next thing you know, they’ll tell us that drinking water from a hose is bad.

At any rate, it’s all too much for this 70s kid. I’m going to hop on my banana bike, take a jaunt to the corner store, and drown my sorrows in cola and pop rocks. Anyone else care to join me?