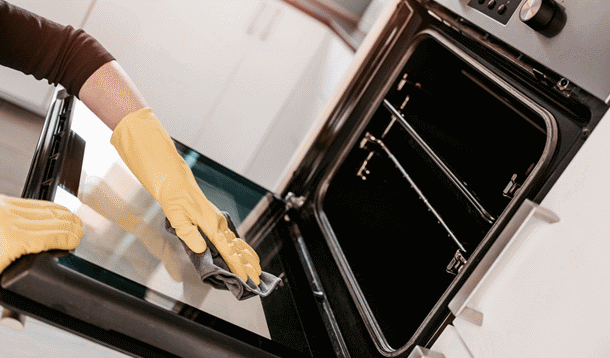 When I read a recent CBC news article about the perils of using an electric oven’s self-cleaning cycle, I felt like they were preaching to the choir. In my kitchen, a wraparound counter offers lots of seats that all face the wall oven, and given my love of entertaining, that means a lot of eyes looking at the oven.

I therefore try to keep it as clean as I can, but I learned the hard way that modern ovens have a lot of fancy electronics in them, including thermal fuses and delicate, expensive motherboards, both of which cannot withstand the prolonged 800F – 900F temperatures reached during self-cleaning cycles.

In the past, cleaning my oven has caused me rather a lot of bother, since I’m allergic to those nasty commercial foaming cleansers (not to mention, I don’t want my family breathing those fumes). It all kind of makes me long for the good old days when a blackened hearth was 100% socially acceptable.

Learn from my misfortune:

I first used the self-cleaning cycle when my new oven was still under warranty, then enjoyed not one, but two visits from a gruff repairman who had to replace a whole bunch of parts after the oven stopped working. Unfortunately for me, he did not explain at that time that the failure had likely been caused by the self-clean cycle.

It was not until the third time my oven stopped working – no longer under warranty – that I finally learned that the self-cleaning cycle can spell disaster for most of today’s ovens, thanks to their sensitive electronic components. I decided to do a little research and both online sources and my favourite appliance parts shop confirmed my suspicions – that it’s not advisable to use the self-cleaning cycle. In Europe, most manufacturers have stopped offering self-cleaning as a feature because it’s so damaging to the appliance.

Other things you should know:

The other tip I received was not to line the bottom of the oven with tin foil; it can either interfere with a hidden bake element, or cause an exposed element to short-circuit. You can buy silicone oven liners which eliminate the short-circuiting issue, but they can still impact the performance of a hidden element. A better suggestion is to put a baking tray on the lowest oven rack any time you’re cooking something that you think might bubble over.

So, what to do with a dirty oven?

Take a tip from cleaning the microwave:

I discovered that the trick I use to clean my microwave works similarly well in the conventional oven. In the microwave, I put a glass measuring cup filled with water and a few drops of lemon juice inside, then heat on full power for 2 minutes. Let stand two minutes, then remove the measuring cup and give the microwave’s interior a thorough wipe down with a clean, damp cloth.

For the conventional oven, I put a baking pan filled with water and a few lemon slices into the oven, preheated to 300F. I let it warm up and create steam inside the oven for about 20 minutes which loosens a lot of stuck on stuff, making it easier to wipe the oven clean while it’s still warm. For any stubborn, baked-on grime, I sprinkle it with a few drops of vinegar, followed by a sprinkling of baking soda; let sit for 2 minutes then use a plastic pot scrubber to loosen the grime before wiping away with a cloth.

Never wipe down the glass on your oven door when it’s still warm. A wet cloth on the hot glass will almost certainly cause the glass to crack. Just one more cautionary tale from someone who’s spent more time worrying about oven cleaning than anyone should. You’re welcome.

RELATED: How To Clean Your Glass-Top Stove With Natural Ingredients

Paula Roy readily admits that she’s obsessed with food. Typically, it’s the first thing she thinks of in the morning and the last of the day as well. She recognizes that not everyone shares her passion for cooking, so she channels much of her enthusiasm into creating family-friendly recipes that are easy to prepare and yield delicious results.

Paula loves to travel and explore whatever culinary treasures a destination has to offer. In addition to leading cooking classes and making frequent TV appearances, she’s also a busy freelance writer and serves as the food editor of popular style magazine Ottawa At Home. In addition to her contributions for YMC, you can also follow Paula’s edible adventures through her blog, Constantly Cooking, and keep up with her daily kitchen antics on Twitter and Instagram (@paulajroy).