Please Get Me Off This Goddamned Ferris Wheel - A Love Story 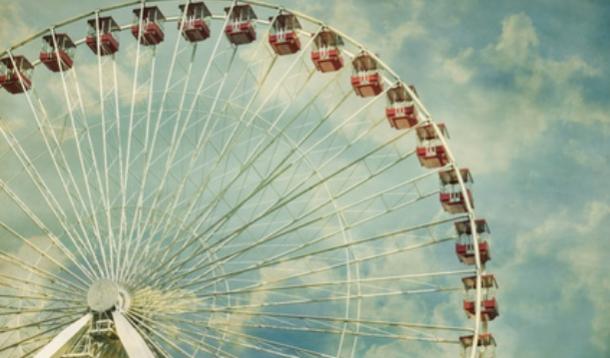 I’m terrified of the dark. And when I say terrified I mean that I’ve pulled a hamstring muscle running up the stairs to get away from whatever it is that was DEFINITELY going to skin me and eat my brains. But now I’m a dad and I’m not allowed to be afraid of the dark anymore. I’ve got two kids that look at me and think; “why is he shaking and crying?” Ok, well that actually describes more than a few of my days as a parent but let’s get back to the topic at hand; fears or more succinctly, phobias.

I’ll start by listing the things that I’ve been afraid of: the dark, heights, scorpions, wolves, several breeds of dogs, spiders, snakes, mice, rats, fire, and water. I’m sure I’m missing a few others, but those are the ones that come to mind. But one of the things that I’m very cautious of is passing those fears along to my children. Now to be fair, I have what I believe to be pretty good reasons for (most of) my fears.

Who’s Afraid Of The Big Bad…Everything

I once had a ladder slide out from underneath me and just catch on a ledge before I fell 20-30 feet onto a marble floor. When I was 12 a 6’ long python tried to bite me in my nether regions. My uncle thought it was fun to throw 4’ tall kids into a 4’ deep pool. I’ve burnt my hand on a toaster oven and my arm on a popcorn maker. Mice and rats are gross and if you don’t know what’s actually IN the dark, well, that’s a pretty good reason to be afraid. But two years ago my son and I were at Heritage Park in Calgary and in the middle of the park there is a vintage 1920’s amusement park. My son asked if we could ride the Ferris Wheel. I said yes. I spent the next 10 minutes sitting on a Ferris Wheel POSITIVE that I was going to die. And then a funny thing happened. I didn’t.

Now I’d love to tell you that this experience has given me the confidence to shake my fear of heights. It hasn’t. But what this experience has done is make me confident that I don’t want my kids to be afraid of the things I’m afraid of JUST because I’m afraid of them. Which is why over the past year I’ve held in my hands; a scorpion, a tarantula, several snakes and a rat. At no point did I feel ok about these things but my children have also held snakes, rats, a tarantula and a scorpion. My 2 year old daughter has held a tarantula in her hand. I’m so incredibly proud of that. But there’s another thing I think about sometimes; maybe you should be afraid of spiders and scorpions.

One day while letting my children play with some animals at Little Ray’s Reptile show at our local museum, another parent suggested that perhaps teaching my kids about rational fear wasn’t such a bad idea. I chewed on that for awhile. Were my kids going to be THOSE kids that get eaten by a snake or trampled by a hippopotamus because they’re dad was too dumb to teach them that these were dangerous animals? Nope.

The fact is that most animals are not that dangerous if you have some respect for them. And rather than fear, that’s what I’ve been working on teaching my kids: respect. We talk about understanding where and when to touch an animal. We talk about having a plan to get down from something that’s high rather than talking so much about not climbing up there in the first place.

There’s a great TED talk about a program in California called The Tinkering School where they encourage kids (and I do mean kids) to play with fire, take apart appliances, use power tools and own a pocket knife. Why? Because if we teach out kids how to respect things at a young age, not fear but respect, then they’re less likely to act disrespectfully in those regards when they’re older. And when they’re older, the consequences can be far more serious. A kid that doesn’t learn to respect heights when they’re 5 is that kid who jumps off their roof when they’re 15. A kid that doesn’t respect dogs when they’re 5 is the man who doesn’t train his dog properly when he’s 20 and his dog bites someone, igniting fear in that individual.

Fear is a powerful motivator. Fear drives so many of the decisions we make everyday. But my biggest fear is not that I’ll be murdered with a hatchet in the dark while trying to return inside from taking out the compost or being eaten by a snake while swimming in a pool full of fire. My biggest fear is that I’m not going to be a great father and in order to do that, I need to teach my kids to respect, not fear, the world around them.

But I don’t ever want to go on another Ferris Wheel so long as I live.

RELATED: The Top 20 Fears of Someone Who is Afraid of... Everything